Industry Looks to Progress With Ultrasound

They say a picture is worth a thousand words, but no one talks about the challenges that come with acquiring such a photo. For the sheep industry, ultrasound technology just might provide that all-important piece of the puzzle.

The goal was to train 50 new ultrasound technicians who can help collect data and provide producers – as well as the industry – with valuable insight into the American lamb carcass, according to NSIP Ultrasound Training Committee Chair Christopher Schauer, Ph.D., of North Dakota. Heading into the final two schools in Kansas and Pennsylvania in April, 45 technicians had been certified. 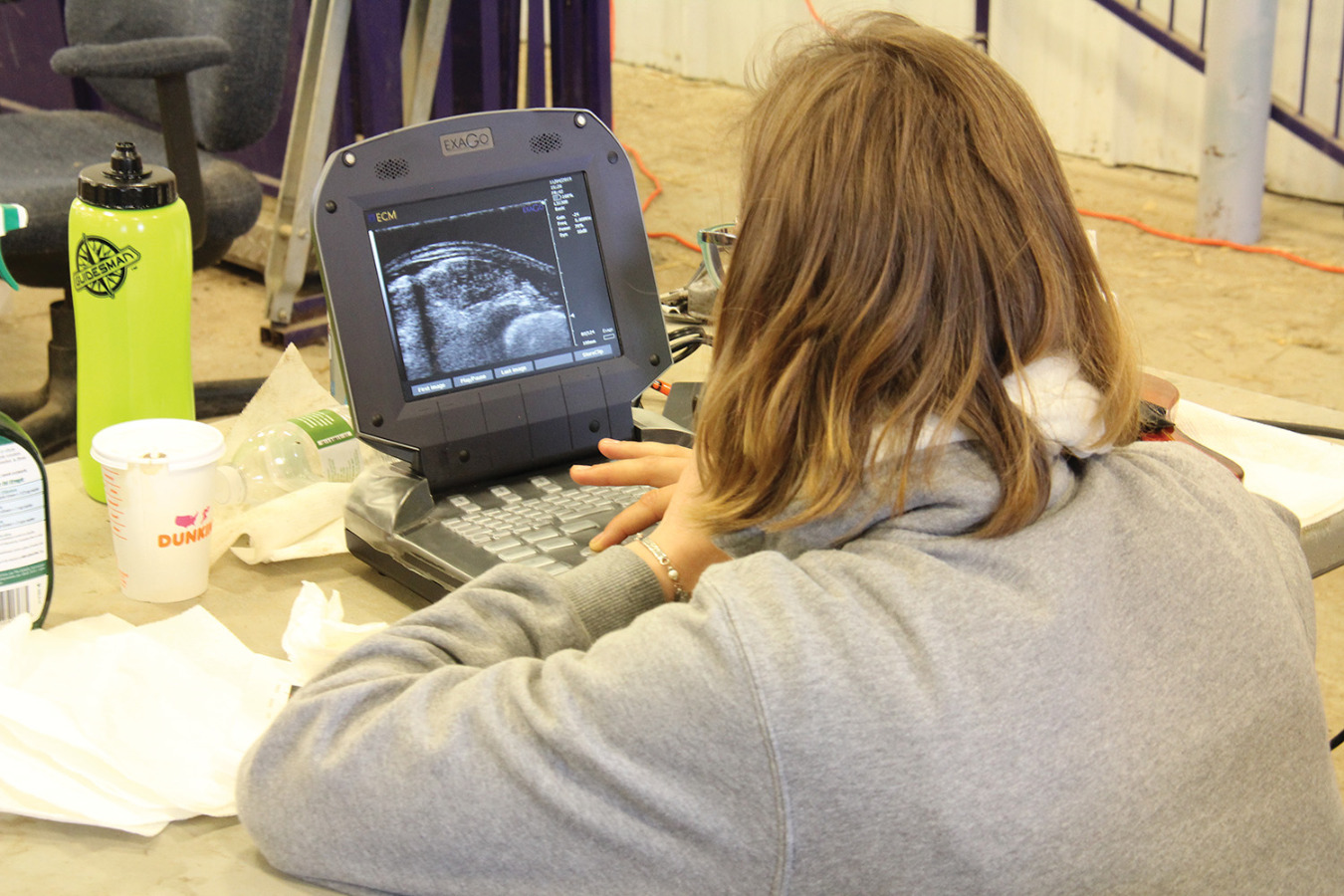 “The value of lamb is ultimately determined by carcass quality; however, there are many factors that are a part of carcass evaluation and character,” reads the introduction to the course manual. “The use of ultrasound technology allows for the real-time assessment of live animals by trained technicians. This data can then be used for the genetic improvement of the carcass quality by quantifying the conformation of lambs in an objective manner. The National Sheep Improvement Program is seeking to improve the genetic selection of sheep based on measurements taken via live ultrasound imaging of lambs, including: rib fat, loin eye depth and/or area.”

The role ultrasound can play in reshaping the American sheep industry was certainly a topic of conversation during classroom portions of the hands-on clinic.

“The most desirable cuts of lamb are the loin chops (loin eye), hind saddle and rack,” read the classroom materials. “Other livestock industries have successfully increased loin eye area by genetic selection via ultrasound technology. Evaluation of live animals allows for selection to increase desirable characteristics, such as greater loin eye area. This trait is highly heritable at 50 percent, therefore it is relatively easy to increase through selection. In the last 10 years, NSIP Suffolk breeders have increased the market weight of lambs at 120 days of age by six pounds per lamb while increasing loin eye muscle and reducing fat deposition.

“To use ultrasound data properly, one must understand the interpretation of, as well as the limitations, of the data. Lambs that differ by only a hundredth of a square inch in loin eye area are likely not detectably different. More definite separations in measures are needed to determine confidently that muscular differences actually exist. This data is especially useful in determining those lambs that are above average, average or below average in the flock or sire groups.”

Veteran ultrasound technician Dallas McDermott attended a school last June in Wisconsin to be recertified on sheep, and then offered to help instruct future schools. He was the lead instructor in early April at the school hosted by Kansas State University in Manhattan, Kan. McDermott bought his first real-time ultrasound scanner in 1989, and has worked in the beef, swine and sheep industries ever since.

“The sheep industry has been a little slow coming to the table about performance testing, but we’re gaining some momentum now,” he said. “We just need more technicians trained to do this. That way, we can provide more data to the industry and make true progress.”

The Kansas school included two days of classroom and hands-on training before students underwent testing for NSIP certification on the final day. But there’s more to the process than just learning how to run the ultrasound machine.

“We spent four or five hours the first day going through Powerpoint presentations and fielding questions,” McDermott said. “We had different levels of comfort and experience within the class, so we needed to get them to a comfortable point with the anatomy, and help them understand what we’re doing. It’s important to know why this matters to the industry.

“Some of those conversations digressed from just pure anatomy to what’s happening in the industry, and why we should be concerned about certain aspects of what we’re doing.”

From there, students were turned loose in the barn to spend as much time as possible getting comfortable with the process of ultrasounding live animals. Placement of the transducer – a device that produces sound waves that bounce off body tissues and make echoes and sends them to a computer that uses them to create a picture – is critical in the process.

“When placing the transducer, one must palpate the last (13th) rib and then place the probe between it and the second to last rib,” according to course instruction materials. “The transducer should be placed close and perpendicular to the spine, therefore parallel to the ribs. If the transducer is not placed parallel to the ribs, a reflection will appear at the bottom of the image at the location where the transducer crosses the ribs. If placed too close to the ribs, the intercostal muscles can cause distortion of the image. The greatest depth of the ribeye is in the middle and decreases as you move closer to or on the rib on either side. The monitor should be placed directly in the view of the scanner to ensure accurate visual inspection of the image.”

Learning where and how to place the transducer is often the most challenging aspect of the process for beginners.

“The biggest thing is just understanding the small area we are really shooting for to get all of the landmarks,” McDermott said. “You have to make really small movements with the transducer to really open up that one small area we are looking for. Just like anything else, experience helps a lot. It doesn’t look that difficult when you’re watching an experienced technician, but it’s different when the scanner is in your hand for the first time.”

Kansas State University Extension Agent DeWayne Craghead was on hand for the school in Kansas and agreed that positioning the scanner is a tough task to master. While he’d never scanned sheep personally, he’s been involved in handling animals for scanners at county fairs for more than 20 years.

“I’d like to think I learned something in those 20 years of watching other people do it, but I can tell you that those images mean a whole lot more to me now that someone has explained what we’re looking for in the image. But positioning the scanner is still the most difficult part for me. It’s such a tiny spot that you’re trying to find on the sheep.”

Craghead plans to undergo training on beef, swine and sheep scanning in hopes that several western counties in Kansas will combine to buy an ultrasound machine for use at the county fairs.

“Right now, we have a lady from Nebraska who scans several of our county fairs, and she’s done a great job,” he said. “But if she were to quit, we’d have to go further abroad to find someone.”

An agriculture instructor at Fort Scott (Kan.) Community College, Sara Scott inherited the school’s livestock ultrasound technology class this year and was looking for additional training that she can then pass along to her students. She’s already certified to scan swine.

With a basic understanding of ultrasound technology, Scott came to Manhattan looking to learn more about the role the technology might play in the future of the lamb industry.

“That’s something they talked about during the pork certification,” she said. “But I missed the first day of the school here, and I bet they talked about that some already. I’m going to have to pick the brains of some of the others here for that, because I need to be able to relate to my students how this information is being used in the industry. For myself and my students, that’s just as important as learning how to scan the sheep.”

Scott also benefitted from McDermott’s years of experience, as the college has provided her with an older scanning machine. McDermott had worked with the same model in past years and was able to show Scott tricks to adjusting the machine’s settings.

“It’s not that old (8 to 10 years), but in the technology world, it’s older than a lot of the machines that people are using. But it gets the job done.”

Once students were comfortable capturing an accurate image, they still had plenty to learn.

Ultrasound technicians are then expected to record the images and interpret data from them as they take measurements concerning loin eye and fat.