When the dust settled, Iowa’s Davin Perrin claimed the top spot – his third national championship, but first since 2007 – and secured his place on the United States team that will head to the World Shearing and Wool Handling Championships this summer in France. 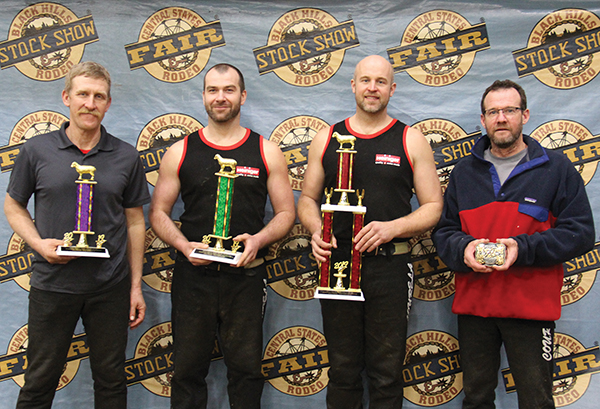 Perrin finished shearing his 10 sheep in the final round more than a minute and a half behind an almost simultaneous finish by Loren Opstedahl, Alex Moser and Nolan Abel. But there’s more to the contest than just being fast. Shearers are judged both while they are shearing and after they’ve finished, with points adding up for miscues such as leaving wool on the sheep or second cuts in the fleece. Perrin’s quality score of 15.6 points was 4.5 points ahead of Moser and Abel and allowed him to take the top spot with a combined score of 60.30 points. Moser was second at 60.45 points and Abel took third at 60.50 points.

“With the top four out there, it’s anybody’s game,” Perrin said. “I shear with Alex and Nolan all the time, and they’re always ahead of me at the end of the day. But the quality aspect is important too. My grandfather and father both sheared, and I tagged along with them all the time. I started shearing when I was 14, but they always stressed quality and doing the job the right way.”

Based on a season-long point system, Moser had already earned one of the two shearing spots on the United States’ team for the world championships, regardless of what happened in Rapid City. But the defending national champion still had his sights set on the top spot.

“It took a little pressure off of me, but I still wanted to give it my best shot,” said Moser. “We shear together every day, so we knew it was going to be close. All four of the finalists in the professional division are definitely among the top shearers in the country.”

Perrin and Moser will be joined on the national team by blade shearers Kevin Ford and Doug Rathke and wool handlers Leann Brimmer and Amelia Seifert.

The blade shearing division was nearly as close as the professional division, with Ford edging Rathke by just three tenths of a point. Both are experienced blade shearers.

“I did a little bit of machine shearing, but I never took to it,” said Ford, 73, who has represented the United States at the world championships multiple times in blade shearing. “It’s a thrill to do it all with your own power. I still shear about 4,000 head a year – mostly small flocks back in Massachusetts.

“Once you get started competing in these contests, it’s pretty fun to do. It keeps me sharp, and it’s something I look forward to every year.”

Brimmer’s win in the wool handling division wasn’t quite as close as the veteran topped Seifert by three points thanks to a fault-free run.

Shearers in two other divisions also competed, but without a spot in the world championships on the line. South Dakota’s Levi McTaggert used the support of a substantial cheering section to win the intermediate division over John Beasley by 5.5 points. Left hander Jacob Earhart of Virginia – the only southpaw in the competition – won the junior division by 10 points over Abigail Appleby.

ASI is a sponsor of the competition each year.