Crowds Flock to California Wool Classing, Shearing Schools in May

Seventeen women with backgrounds mostly in the small flock and niche marketing sides of the American wool industry took part in an ASI Wool Classing School in northern California on May 8-10. 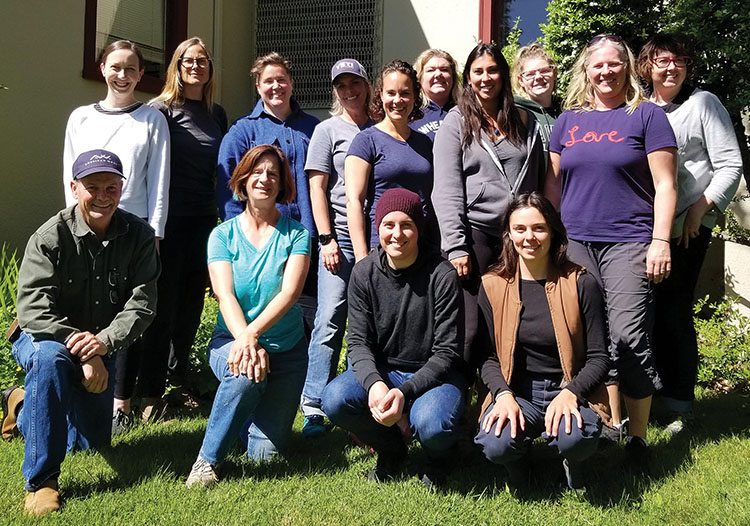 “It was an engaging group that was eager to learn,” said instructor Ronald Pope of Texas. He was joined by ASI Wool Production and Specialty Markets Consultant Heather Pearce. “It was great that she was there because she was able to address areas such as hand spinning, which she has a lot more experience with than I do. And there was a lot of interest in those areas with this group.”

After a day in the classroom, the classing students headed to the shearing barn at the University of California Hopland Research and Extension Center to work alongside 28 shearing school students in a real-world setting. They gained practical experience in handling, skirting and bailing fleeces during their two days of hands-on learning.

“When we first started these classing schools in the early 1990s, they were generally held at commercial shearings,” Pope said. “But our students then were typically producers or wool mill employees who had been in a commercial setting before. A lot of the students these days can’t jump right into that environment. But the shearing school provides a slow enough pace to get everyone involved while they learn. The schools never quite get to a commercial pace, but they do present a challenge for everyone involved.”

Pope has instructed approximately 30 wool classing schools through the years, and said he caters his teaching to the interests and priorities of the students as much as possible.

“Most will probably never class wool professionally, but several of them did express an interest in working in a commercial setting to gain more experience. Heather and I encouraged them to get involved with their state sheep associations because that might open the door for additional experience.”