Everywhere you look in San Angelo, Texas, there are painted sheep: here a sheep in front of the YMCA, there a glasses-wearing sheep at the Lions Club, everywhere a sheep, sheep, scattered across the city in a colorful, creative herd of fiberglass figures that has become the symbol of this West Texas city.

The 100th sculpture will join the statuesque flock in 2019. That’s almost one for every 1,000 people in San Angelo, in case you’re counting sheep.
The sheep sculptures got their start in 2007 when the Downtown San Angelo, Inc. Promotions Committee decided herding fiberglass ewes was easier than reorganizing the Miss Wool of Texas Pageant that had taken place from 1952 to 1972.

Sandy Whittley was the executive secretary at the Texas Sheep & Goat Raisers Association at the time, and welcomed the flock with open arms. 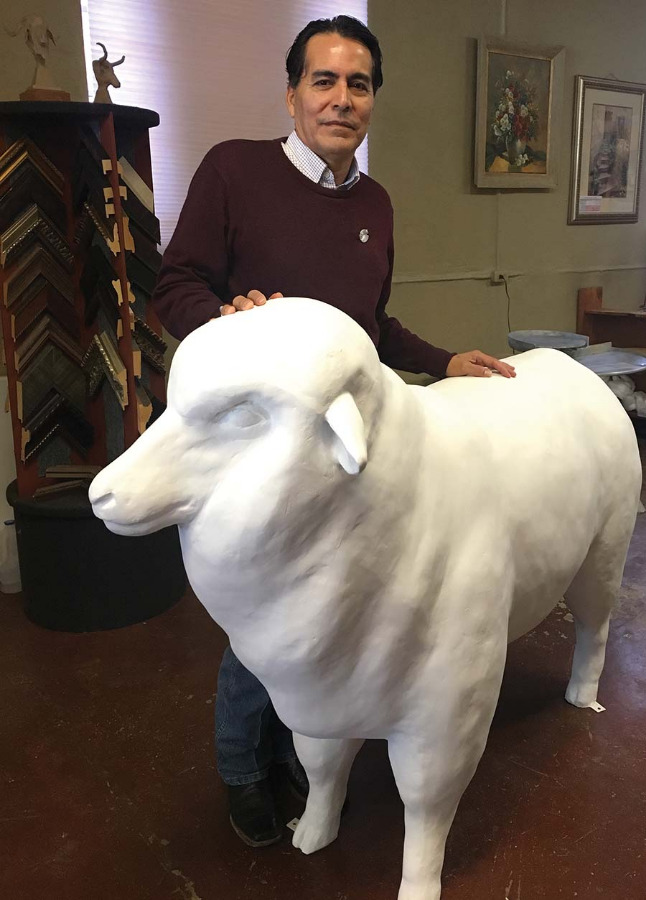 “The TSGRA was involved in this up to its ears,” she said. “We were big pushers for this cool way to help the wool industry and San Angelo, which is the inland wool capital of the world. We laid out the first money for a sheep, and we hired the first artist.”

San Angelo award-winning artist and sculptor Raul Ruiz was a natural choice. He began sketching sheep when he was 7 years old, helping his grandfather, father and uncles by picking up wool around the sheep rig. Ruiz is now known as the “Sheep Shearing Artist,” because he learned the anatomy of sheep by shearing them.

“For the first ewe I wanted to keep it simple,” Ruiz said. “Designing for a sheep is like designing a canvas; you have to have a focal point and stick to your main subject. So I did a drawing of a sheep on one side and a goat on the other. I like to make the eyeballs look real; I try to do a good job on each sheep I do. I keep it simple, because I think people will remember that. My dad always said, do the best you can on whatever you can, and that’s what I do.”

When the sculpture was done, a TSGRA group that included then president Lee Bloodworth of Sonora, Texas, the late Marvin Shurley of Sonora and Whittley stood in front of the office to watch the first ewe settle into its home. Shurley climbed on the Bobcat and they set the big rock that came off of Bloodworth’s grandfather’s ranch. That sheep was named Wool Ewe Remember.

Some of the sheep are more fanciful. For Cavender’s, Ruiz painted boots on the sculpture and recreated the women’s clothing department on one side and the men’s department on the other. Treva Boyd and Crystal Goodman – who created the 97th and 98th sheep – included symbols of all five branches of the military, an American flag and an eagle on one and a ram, a bobcat and the flag on the other.

Here are ten facts about the San Angelo herd so that no one can pull the wool over your eyes:

1. At first, all the sculptures were called ewes in honor of the contestants of the Miss Wool pageant. Now that “boys” have been added, they’re all referred to as sheep rather than ewes.

2. Where there is a painted sheep, there is a pun. Witness these sheeptacular names: Ed-ewe-cate (Howard College), When Ewe Are Hungry, EWE-nique, Happy Trails to EWE, Lambscapes, Merino Antoinette and 94 more names, all littered with sheep puns.

3. There have been 25 artists since the project started. Ruiz has painted four of the sheep, although he says some people think he painted all of them.

4. The businesses that sponsor the sheep choose their own artist from the list at Downtown San Angelo. They pay the organization $1,600 for each fiberglass body, plus a fee to the artist. Ruiz is at the top of the list, but new artists are added all the time. The sponsors work with the artists to pick a theme. The artists create different renditions until the sponsors approve the designs.

5. The cost for a base is separate and is the responsibility of the sponsor. Each fiberglass form has flanges affixed to the bottom of the sheep’s legs for mounting to the base.

6. The basic fiberglass forms are alike and have to be sanded, coated with gesso, painted with acrylic by the artist then a local auto dealership puts on a clear coat to seal and preserve the paint.

7. Most – but not all – sheep have a plaque with their name, sponsor and artist’s name somewhere on the body or base.

8. San Angelo’s sheep play nice. No libel, slander or social disrespect is allowed, and a direct label advertising a product isn’t allowed in the flock.

9. Sheep placed on city property have to be approved by the Public Art Commission through Parks & Recreation Director Carl White.

10. There is an online tour of at the Downtown San Angelo website. Visit DowntownSanAngelo.com/sheepspectacular.php for more information. The page is linked to Google maps that show where the sheep are located. A printed brochure is currently being updated.

San Angelo’s sheep make a mighty big impact. They are popular props and there are no signs that say “hands off.” Therefore hundreds of photos have been taken of this wooly flock since it started in 2007.

Is San Angelo the Wool Capital Of The World? It is, at the very least, home of the World’s Largest Flock of Fiberglass Sheep.