Dan Persons’ Rafter P Ranch is one of the largest sheep farms in Minnesota, and thus provided a great setting for producers from all across the state to come and learn during the Minnesota Lamb & Wool Producers’ Spring Sheep Workshop.

The cool day on April 7 didn’t have much affect on the hearty Minnesotans – most of whom were just happy to have not seen fresh snow in a few days. Mixed in among wool handling discussions and a hoof trimming demonstration, the ranch itself proved to be the star of the day. The former cattle ranch went to sheep full time in the mid 2000s because its mix of small buildings was a better fit for the smaller animals. 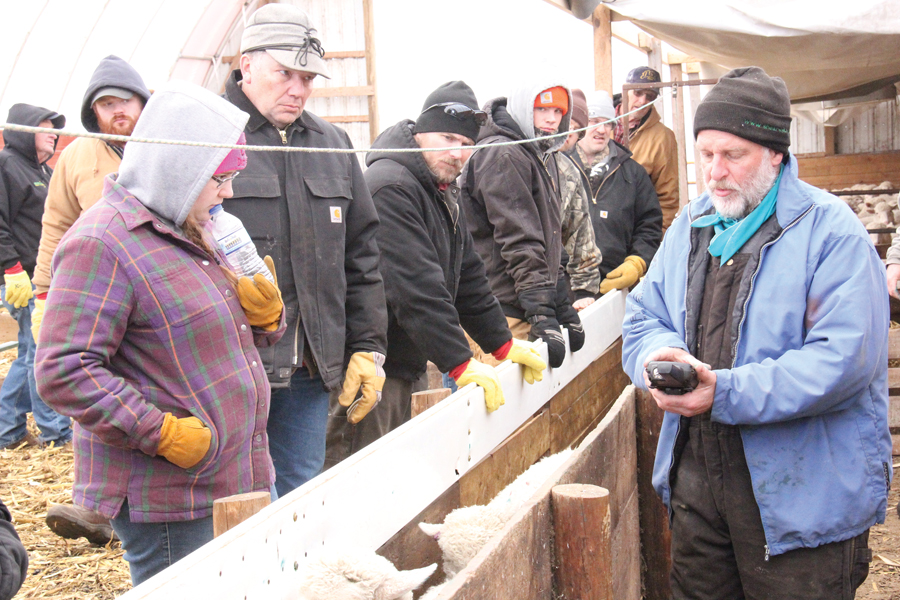 “We got into sheep to run both cattle and sheep in the same pasture, but we grew because we really liked the sheep,” said Dan about his 950-ewe operation. “We stayed in the sheep because they bring a good profit.”

Among the crowd were young entrepreneurs Jared and Jessica Brinkman. The couple have taken over Jared’s family farm in  Goodhue, Minn., in recent years and worked their way from 100 ewes to 350. They kept back nearly 150 ewe lambs this year and hope to lamb 500 ewes next spring. After that, they believe 750 is an achievable goal in just a few years. Eventually, they’d like to be running 1,000 ewes.

“We’re growing as much as we can with the space that we have,” Jared said. “We’re pushing to get to 750 ewes because that will justify some of the equipment we’d like to buy and buildings that we want to build. It’s great to come here and see a bigger operation and how everything flows around the property. Managing an operation of this size is a big deal, so I’m glad we got to see it.”

The Brinkmans have been front and center for meetings, workshops and seminars throughout the state in recent years, said ASI Executive Board member John Dvorak of Minnesota.

“We’ve been looking around a lot and going to all of the meetings,” admitted Jessica, who grew up on a hobby farm just 10 minutes from the Rafter P Ranch. “These producers have done the trial and error, and we want to be able to learn from that. It’s important to us to leave this farming legacy for our kids.”

The couple jumped at the chance to have Dan join them for lunch last year at a state meeting. It gave them a chance to pick his brain about the Shearwell Data systems he sells part-time from his home base in Kensington, Minn.

“We already knew our organization could be better,” said Jessica. “He gave us the rundown on the system and we were in.”

The Brinkmans said they leave every such meeting with motivation for the future.

“Last time, we bought 150 ewes on the way home,” Jared said. “We need a new building now, so we’re taking a close look at the facilities here.”