In mid-April, the U.S. House of Representatives committee on agriculture released text of the proposed Farm Bill. ASI and state association leaders were in Washington, D.C., just weeks prior re-iterating to key members of Congress about sheep industry requests in the legislation.

As agriculture programs are set to expire this year, the new Farm Bill needs to be authorized before the end of 2018. ASI recently wrote to committee chairman Michael Conaway of Texas and ranking member Collin Peterson of Minnesota with sheep industry support for prompt consideration by the committee and approval in the House. 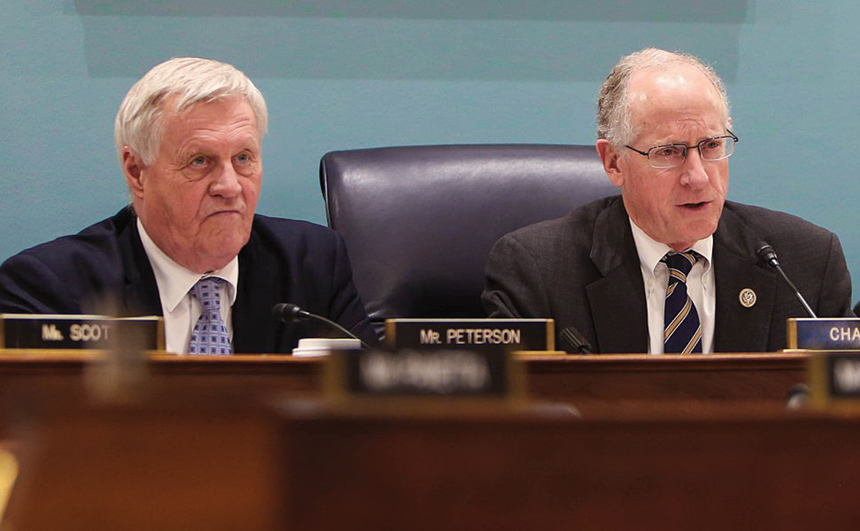 Highlights include an increase to $2 million for the National Sheep Industry Improvement Center grant program and an extension of the Wool Trust. As a reminder to our readership, the Wool Trust language is critical to the wool business – from suit companies to American wool users such as Burlington. In 1996, Burlington asked ASI – with the political support of sheep ranchers – to help the company address a trade loophole in what was then the fairly new North American Free Trade Agreement that was harmful to American wool manufacturers. ASI was active politically and provided support for the textile factions to reach agreement on tariff treatment that was acceptable to the wool business in legislation approved by Congress in May of 2000.

ASI has helped wool textile firms politically since then with several re-authorizations of the provisions – the 2014 Farm Bill being the latest. Since that provision expires in late 2018, we are pleased the House ag committee has included it in the next installment of the Farm Bill. The pima cotton shirt business has similar issues and provisions to address, so we believe it makes sense to cover both industries in one provision as is proposed in HR 2. ASI implements the wool research portion of the provision and – while tiny compared to the benefit to wool manufacturers – is important to the wool programming the association delivers to producers, buyers and exporters of American wool.

The Farm Bill provides some risk management for sheep production with a marketing loan for wool, and we also support the emergency provisions for livestock producers authorized to address droughts and storms. In testimony before the agriculture committee in 2017 and during the spring trip in march, ASI asked for support of an update to the wool loan program. Market conditions in 2002 are much different than the situation today, so an update is warranted. The committee didn’t have the necessary funding for an update in the initial version of the bill, but know that we are at the top of the list for opportunities to tackle higher loan rates.

The House committee also addresses the livestock industry request for an animal health vaccine bank and animal disease and preparedness response, which is impressive. It is an expensive undertaking to prepare for a foot-and-mouth disease crisis. Many nations have a vaccine bank established already.

The proposed Farm Bill continues the emergency provisions for livestock producers authorized to address droughts and storms, which seems to hit some region of the country every year. When it happens, this is a great tool to assist with bankers and financing.

As of this writing, the House committee had passed the bill and sent it to the floor. ASI is already working with Senate agriculture committee leaders on the same requests and in the coming months hopefully we get all of our requests in the final legislation.

We hope those efforts are successful, and we will keep you apprised in future issues of the Sheep Industry News.