Paul Rodgers worked for the American sheep industry before ASI even existed, and will continue to influence the industry as a producer and occasional consultant long after he retires from ASI on July 6.

ASI’s deputy director announced his retirement to association staff in late March and has been working with ASI Executive Director Peter Orwick and Deputy Director Rita Samuelson to craft an exit strategy that will allow him to spend more time working with his family’s sixth-generation sheep operation in West Virginia. 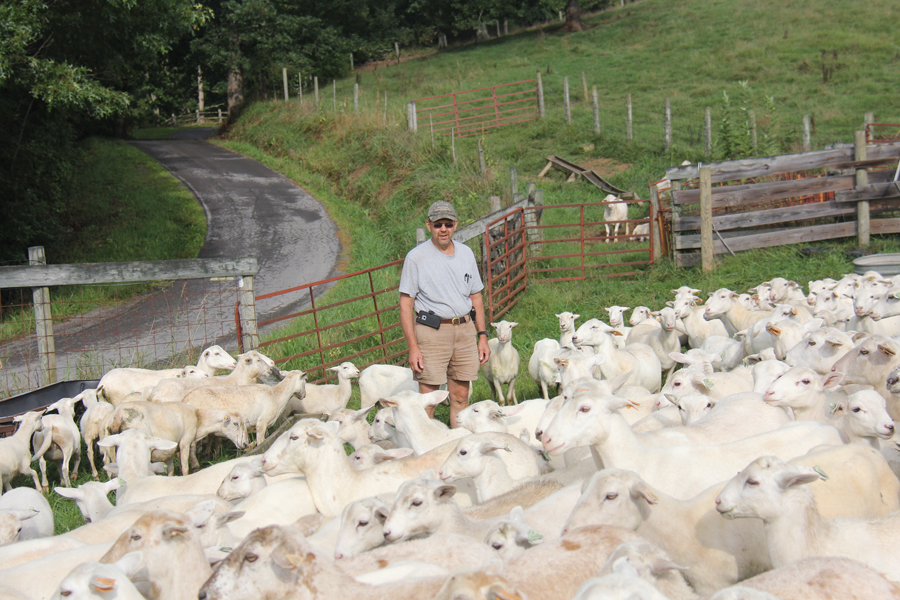 A graduate of Virginia Polytechnic Institute – now known as Virginia Tech – Rodgers worked as a county extension agent and 4-H educator, then as an extension farm management agent early in his career. He co-founded the National Electronic Marketing Association to sell livestock via computer in the early 1980s – long before the advent of the internet – then worked for the National Livestock Producers Association as assistant manager. Eventually, he found his way to the sheep industry.

His 34 years of industry leadership started with the American Sheep Producers Council – a forerunner to ASI – when he accepted a contract consulting position with ASPC on July 1, 1984. A year later, he joined the staff on a full-time basis. ASPC eventually merged with the National Wool Growers Association and Rodgers has worked in Denver, Washington, D.C., and from his home in West Virginia representing ASPC, NWGA and eventually ASI.

He’s dealt with everything from animal health to sheep research to lamb marketing to lamb insurance and price reporting.

“The amazing thing about Paul is that he has been a key player in most of the important issues ASI and the sheep industry have faced – such as lessening the threat of scrapie to the industry. He played a pivotal role with Peter (Orwick) in the action which not only placed tariffs on lamb coming into the United States for a number of years, but provided lamb payments to sheep producers during bleak times. These were game changers and Paul was always a key strategist,” said ASI Deputy Director and longtime co-worker Rita Samuelson. “Paul,  has done it all in the past 34 years. And he does it in such a friendly, easy-going manner that people can really relate to and enjoy. He’s just been a real blessing to the industry.”

Rodgers has also overseen seven of the eight editions of the Sheep Production Handbook, working with those in academia, as well as experienced producers, to put together the comprehensive resource on sheep.

“Working with Paul has truly been an honor and a privilege,” said Cindy Wolf, DVM, who contributed to the Sheep Production Handbook and has worked closely with Rodgers and ASI on animal health issues through the years. “Due to his guidance, I have benefited by learning valuable people skills, approaches to critical thinking, as well as a big picture management style. His leadership, foresight and service to the American sheep industry and the association are irreplaceable.”

With Rodgers at the helm, the Sheep Production Handbook went from a binder (which allowed updates to be issued page by page) to a hardbound book that has topped out at more than 1,200 pages and a whopping 6 pounds. The most recent version comes complete with a USB flash drive that allows readers to skip the workout that comes with packing the book all across a college campus.

“I had the ‘pleasure’ of overseeing seven of those,” Rodgers said. “It was never an easy job, but it gave me the opportunity work with some great people in academia, as well as a number of wonderful producers who provided practical feedback.”

Other highlights from his time in the industry were the merger that created ASI, and the lamb trade case in 2001.

“The merger was a big deal for me, even though I didn’t have a lot to do with it. It certainly affected the way we operate as an association,” Rodgers said. “The trade case really changed everything, and it was a really interesting process to go through.”

ASI spearheaded the case that resulted in a $100 million lamb industry assistance package because of the damaging results of lamb imports on the American market.

Working in the sheep industry was always a priority for Rodgers.

“I can remember back in high school, they talked about goal setting for your career,” said Rodgers, who turns 65 this month. “My three goals were to be a county agent, be a farmer/rancher and work in the sheep industry. Darn if I didn’t get all of that done. My proudest moment was the day they hired me in 1984. At the time it was a temporary contract position, but I’d achieved my goal of working in the sheep industry. More than 30 years later, I was still here.”

While he’s rarely worked in the same office as the rest of the ASI staff, his contributions to the association have proven invaluable through the years.

“Paul is providing generous notice and transitional support for 2018 as we cover the key responsibilities he manages for the association,” said Orwick. “We would prefer to keep him as full-time team member of ASI, but appreciate the opportunity his decision affords he and his family. We congratulate Paul and thank him for the great leadership he provided to all of us.”

As a shepherd himself, leadership came naturally for Rodgers.

“As humans, we have to lead sheep, we can’t push them like a dog can,” Rodgers said. “I think that applies to people, as well. There are a lot of great people in our business who understand that. The sheep industry isn’t as big as other sectors of livestock, but I think we’ve always been good leaders in animal agriculture.

“Working with sheep is a high calling in my opinion. If you read the scriptures, a lot of the leaders in biblical times were shepherds first. I think there’s something to that, which is why I always wanted to be a part of the sheep industry.”

With the “mind of a 35-year-old in a 65-year-old body,” Rodgers’ retirement plans include everything but taking it easy. He’ll devote time he hasn’t had in recent years to his farm and plans to spend more time volunteering with his church and local ag groups such as 4-H.

“We’re expanding our sheep numbers and we’ve got some cattle, but it all needs more time than I’ve been able to devote to it in the last few years,” Rodgers said. “I tell people every chance I get that we’re in the sheep business, but for my wife, Debbie, and I, it’s about the people as much as it is the sheep. People in this industry are the greatest group of people that I’ve ever run across.”