While many producers think about the value of a slaughter lamb in terms of the meat items produced, byproducts such as pelts and offal impact the carcass value for lamb packers. That value is often influenced by international demand and the value of the U.S. dollar, according to Erica Sanko of the California Wool Growers Association.

Sanko was one of the presenters at a gathering of ASI’s Young Entrepreneurs during the recent annual convention. From participating in a variety of tours and an evening pub crawl, to learning how to butcher a lamb, these young producers had a busy schedule in San Antonio. 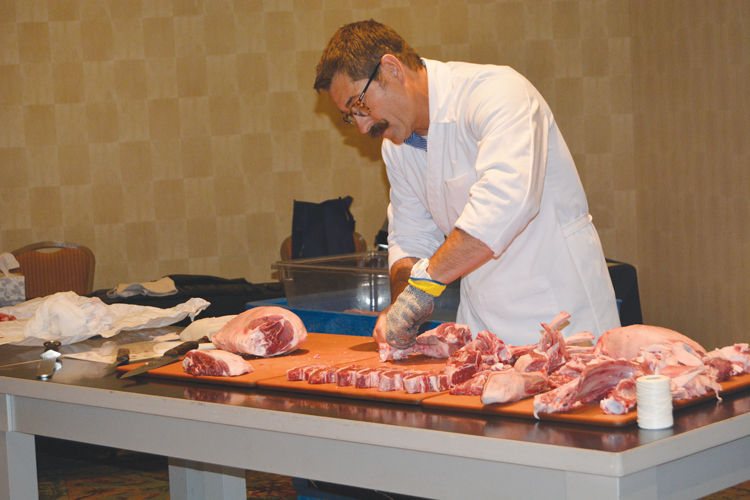 The estimated byproduct value of a carcass is about 10 percent of the slaughter lamb price, and pelt value in itself can fluctuate between $2 and $15 per head.

Sanko noted that of the 1.9 million head of federally inspected sheep slaughtered last year, Nugget International produced more than a million pelts or skins. The majority of pelts are sold as unshorn, which brings a higher premium. Pelts are used for clothing (from slippers to coats), home décor items including rugs and pillows, and as accessories such as car and aircraft seat covers and saddle skins.

The top export markets for wool-on sheep skins are to China (90 percent), Turkey and Russia, according to Sanko, while no-wool skins are primarily sent to Mexico. She also reported while there has been a recent decline in sheep skin exports, the 885,000 pelts exported in the first 11 months of 2017 were valued at $13 million.

John Hewlitt of the University of Wyoming presented an in-depth look at handling ag employees, and the young producers were able to quiz sheep industry lobbyist Jim Richards of Cornerstone Government Affairs on topics of the day.

Producers both young and not-so-young gathered around the table to watch Washington State University’s Dr. Paul Kuber give a presentation on proper cutting of a dressed lamb carcass, complete with tips on meat preparation and barbecuing.