The 2018 ASI Annual Convention – From the Hill Country to Capitol Hill – provided 500-plus members of the sheep and wool industry with the opportunity to address important issues with agency and congressional leaders Jan. 31-Feb. 3 in San Antonio.

Among them was U.S. Department of Agriculture Under Secretary of Marketing and Regulatory Programs Greg Ibach. He used his audience with the ASI Executive Committee and a room full of convention attendees to announce Janet Bucknall as the new deputy administrator for USDA’s Wildlife Services. The announcement of the deputy administrator at the ASI convention – so quickly after the retirement of Bill Clay – clearly demonstrates USDA’s recognition of the American sheep industry’s support for Wildlife Services and its livestock protection program. ASI has long played an important role in ensuring continual and adequate funding for USDA/WS through annual congressional appropriations. 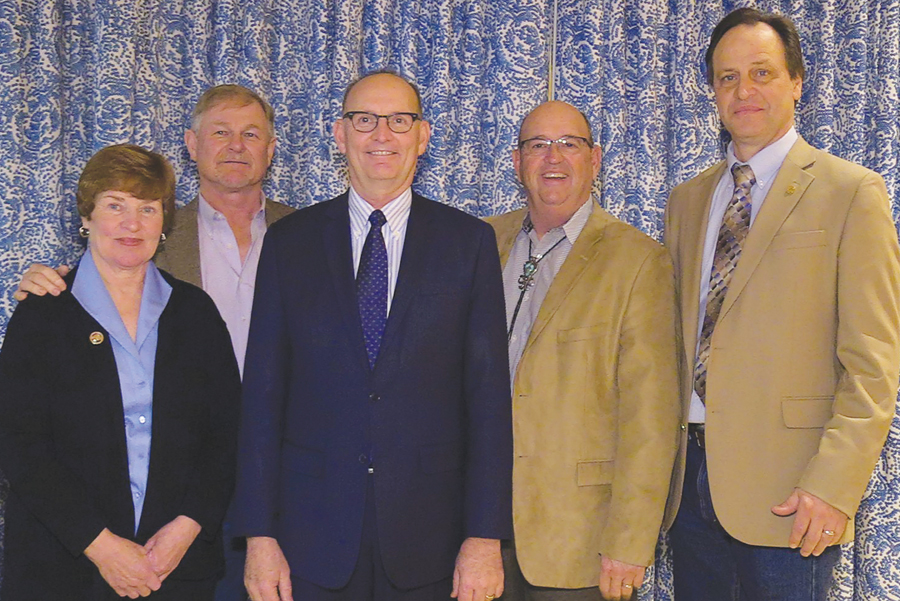 The under secretary also discussed his agency’s efforts to ensure the future use of the M-44 sodium cyanide device in approved states. The M-44 was a great example, as he pointed out, of the increased agency cooperation that the administration has asked at the secretarial and administrator levels.

Having served on the Meat and Livestock Board as a rancher in Nebraska, Ibach expressed his support for checkoff research programs and how enthused he was that the agency was able to announce the new appointments to the American Lamb Board prior to the sheep industry annual meeting.

ASI President Mike Corn thanked the under secretary for the recent decision that Mandatory Price Reporting staff would be exempt from government furloughs, ensuring the continual release of market reporting. Corn then stressed the importance to the industry of the existing scrapie eradication program and full funding of the program.

While scrapie prevalence is at an all-time low and eradication is in sight, the United States’ scrapie status continues to act as a trade barrier. ASI’s executive board asked the under secretary to prioritize the rule updating the scrapie program and propose a full budget for eradication. This priority – plus access for American lamb to Japan and Europe – needs to be well ahead of any rule on transmissible spongiform encephalopathy that would aid foreign sheep producers more than American sheep farmers and ranchers.

More welcome news for the sheep industry came from Dr. Maggie Highland’s presentation to the Resource Management Council. The USDA/Animal Research Service researcher shared tremendous news that after years of taking wildlife nasal swabs, her lab has found mycoplasma ovipneumoniae (movi) in deer and buffalo. Other species might also be carriers. The research holds the potential to significantly change the existing polices in Washington, D.C., that give wild sheep preference ahead of domestic sheep and have led to the wrongful loss of many domestic sheep allotments and producers’ livelihoods.

In other policy news, ASI issued a new directive reaffirming the association’s support for H.B. 4092 (the Ag Act) to fulfill critical labor needs within the American sheep industry. The association further directed the need to address health insurance and numerical cap concerns of the sheep industry. The board also approved a new policy encouraging Wildlife Services to look at cost-saving measures to combat reduced federal funding. Unspent funds from the agency’s budget could then be directed to support the vastly underfunded livestock protection program.

Texas Rep. Will Hurd of the 23rd Congressional District addressed the full board at the ASI Annual Convention and touched briefly on a number of topics that are important to the industry, such as protecting agriculture opportunities, the minor use drug program, international trade, scrapie and immigration reform. He stressed that input and advocacy from farmers and ranchers on these and other issues is important to protect agriculture as a whole.

Wool prices were certainly a topic worth highlighting during the week. Chris Wilcox of Poimena Analysis and the International Wool Textile Organization titled his presentation to the full board, Let the Good Times Roll? While forecasts call for a slight increase in wool production, demand for the natural fiber remains strong. Fine wool prices have continued to break record highs for an extended time, while coarse wool prices are not realizing the same strength.

The development of a new American Wool logo and accompanying social media sites in the past two years has been a point of emphasis for ASI and the American Wool Council. But the focus remains on marketing American wool, said ASI Wool Marketing Director Rita Samuelson.

“We’re targeting the levels of the wool marketing chain that make decisions to purchase American wool,” she told the board of directors. “That has been where ASI has had success in building demand for American wool. We have found that’s where we get a better return for you as a producer. These are the decision makers who purchase and choose whether to buy American wool or other country-of-origin wools.”

Lamb and wool generate most of the income for producers, but sheep skins are often overlooked as a revenue source. Convention attendees got an up close look at this side of the industry from Nugget International’s Mike Wheeler, who led half a dozen tours of his processing facility in San Antonio during the week.

Nugget’s goal is to “generate the highest pelt credit possible through a careful mix of merchandising both raw and tanned American lamb skins,” he said. While sheep skin processing has most likely peaked in China, Wheeler sees new opportunities in Southeast Asia, India and Myanmar. “We’re also investing more and more in our facilities here in San Antonio and in Greeley (Colo.).”

The convention’s industry tour included a stop at the historic Hillingdon Ranch near Comfort, Texas. Managed by the Giles family for more than 130 years, the ranch runs fine wool sheep in addition to Angora goats, Angus cattle and whitetail deer. Owner Robin Giles and his family (wife, Carol; son, Grant; and daughter-in-law, Misty) were gracious hosts during the tour.

A panel featuring Brandon Willis of Ranchers Insurance and Burdell Johnson of ASI’s Food and Fiber Risk Managers also briefed the full board on insurance options for producers. Programs such as the Whole Farm Revenue Program and Livestock Risk Protection-Lamb Insurance for Ranchers were presented.

“The sheep industry and ASI have been ahead of their time in forming their own insurance company and developing the Livestock Risk Protection-Lamb program,” Willis said.

In association business, Brad Boner of Wyoming was elected to serve as the Region 7 Director to the executive committee, replacing outgoing director Ken Wixom.