Industry Leaders Recognized for Their Contributions

Colorado producer Steve Raftopoulos was a guiding voice for the American Sheep Industry Association during some of the most difficult times in the industry following changes in agriculture policy in 1993 that phased out national price support and market promotion. For a lifetime of service, he was recognized with the McClure Silver Ram Award, which was presented on Feb. 2 at the ASI Annual Convention in San Antonio. 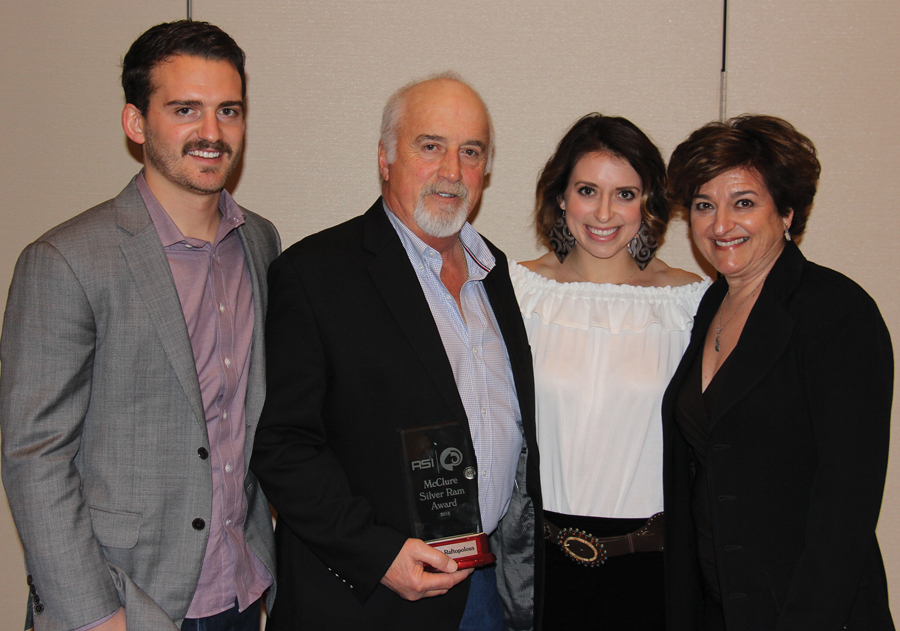 Raftopoulos served on the initial ASI Executive Board following the 1989 merger of the National Wool Growers Association and the American Sheep Producers Council and led the association through the drastic changes of the 1990’s. Many of today’s programs and policies reflect his leadership. The McClure Silver Ram Award, which is dedicated to volunteer commitment and service and is presented to a sheep producer who has made substantial contributions to the sheep industry.

“It’s a great honor to receive this award,” Raftopoulos said. “I’m blessed to have three things in this life: my family, to be a part of this industry, and to have gotten to know the people in the sheep business. The greatest part of all that I’ve done in the industry was the chance to get to know the people in this room. We’re all pieces of a great puzzle that makes the industry work.”

Formed in 2001, Mountain States Rosen is a relative newcomer in an industry steeped with hundreds of years of history in North America. But the impact made by the 17-year-old organization is so profound that the company was a clear choice for the very first ASI Industry Innovation Award.

For Mountain States Rosen, the award recognized the company’s venture from lamb cooperative to the only national producer-owned and –operated, vertically integrated lamb company in the United States. Leading the way in the lamb industry wasn’t exactly what the founders had in mind less than two decades ago.

“We planned something a lot smaller than this,” admitted Frank Moore of Mountain States, who took time to recognize all of the group’s affiliated producers on hand for the luncheon. “It’s been an awesome, awesome trip.” 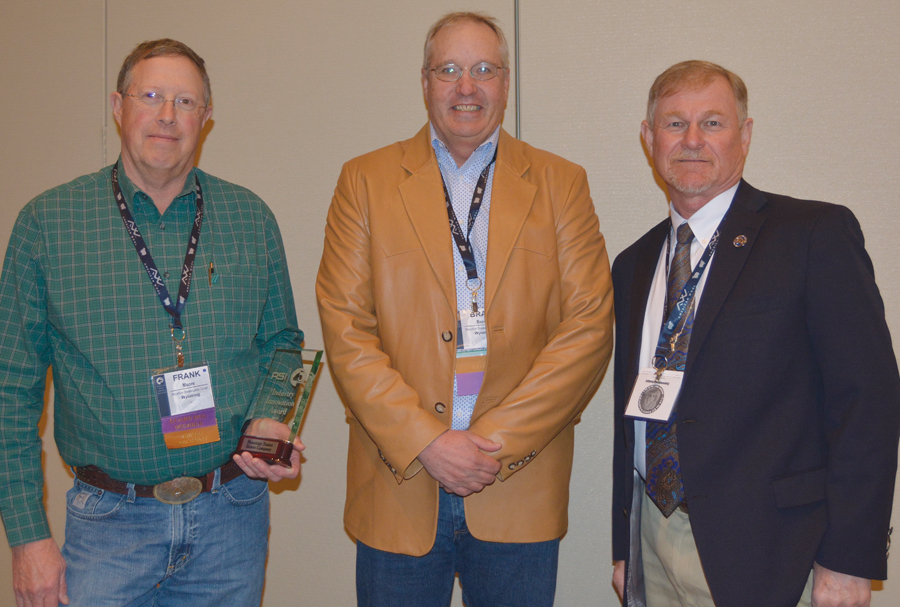 The company took major steps forward with the purchase of a stake in B. Rosen and Sons in 2003. Eventually, Mountain States purchased the New York-based lamb production, distribution and sales company outright. Less than two years ago, Mountain States marked another major investment when it purchased the JBS lamb processing plant in Greeley, Colo.

There’s no way the 124 producers who banded together to start the lamb cooperative could have imagined how the company would grow in the years to come. But there’s no doubting the success Mountain States has achieved, or the fact that the company is a worthy recipient of the very first ASI Industry Innovation Award.

The Distinguished Producer Award was launched in 2014 to celebrate the 150th anniversary of the national organization – the oldest livestock organization in the United States. 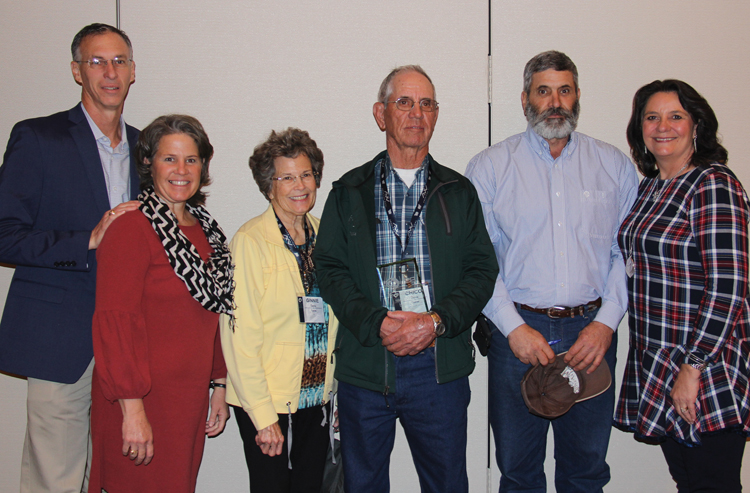 Meeting in San Antonio, it was only fitting that Chico Denis was recognized as the Distinguished Producer. He owns and operates the largest sheep and goat feedlot in Texas on land that has been in his family for several generations. He is a past president of the Texas Sheep and Goat Raiser’s Association and also served on the American Lamb Board. A man of few words, Denis recognized his family and thanked them for helping to carry on the tradition of raising sheep in the Lone Star State.

Sheep genetics, the American dairy sheep industry, numerous agriculture science students and countless sheep producers owe a debt of gratitude to Dr. David Thomas, who recently retired from the University of Wisconsin-Madison after more than 39 years of active involvement in sheep research, teaching and extension. For this reason, he was selected as the Camptender Award winner for 2018.

The award recognizes industry contributions from a professional in a position or field related to sheep production. Nominees are expected to show a strong commitment and a significant contribution to the sheep industry, and Dr. Thomas has done just that. 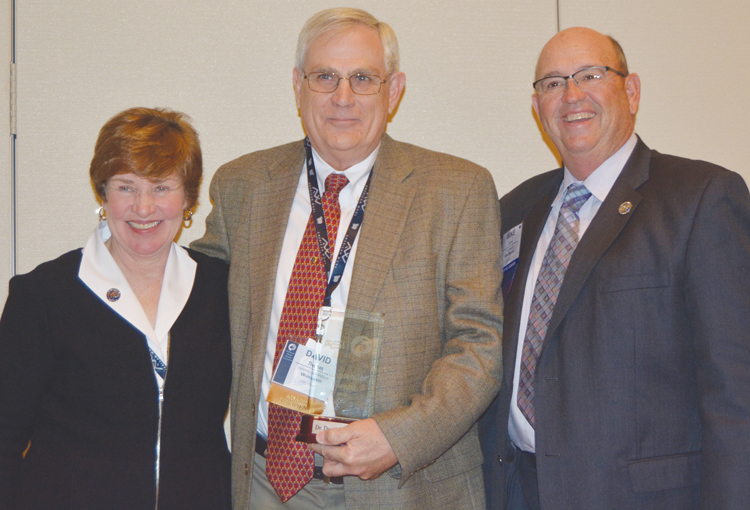 With prior teaching stops at Oregon State University and the University of Illinois, he had an influence on animal agriculture students from all across the country, noting in his acceptance speech that industry contributions by his many graduate students ranks as his most prized career accomplishment.

“I can’t imagine having done anything else with my life,” he said. “My parents bought me a bred yearling ewe in 1963, and I’ve had sheep ever since.”

Shepherd’s Voice winner Susan Littlefield is more than just a reporter for Nebraska Rural Radio Network. She’s also a sheep producer and active member of the Nebraska Sheep and Goat Producers Association. She was also on hand to file radio and television stories from the ASI Annual Convention.

“The producers make stories about the sheep industry so much fun.” she said. “I look forward to working on stories for years to come about this amazing industry that is changing the world.”

On Feb. 1, the American Wool Council and the Wool Roundtable recognized Wool Excellence Winners Mark Kent and Dr. Carl Menzies. For more on their accomplishments, see the story in the January issue of the Sheep Industry News.