In mid-December, I led a delegation of ASI leaders to the Washington, D.C., offices of the U.S. Department of Agriculture to meet with Under Secretary of Trade and Foreign Agricultural Affairs Ted McKinney to discuss international trade.

Dr. Stanley Poe of Indiana – an active leader of the sheep business in that state and nationally with ASI – put the meeting together with the new under secretary. McKinney served as Stan’s congressman before being named to his current USDA post. 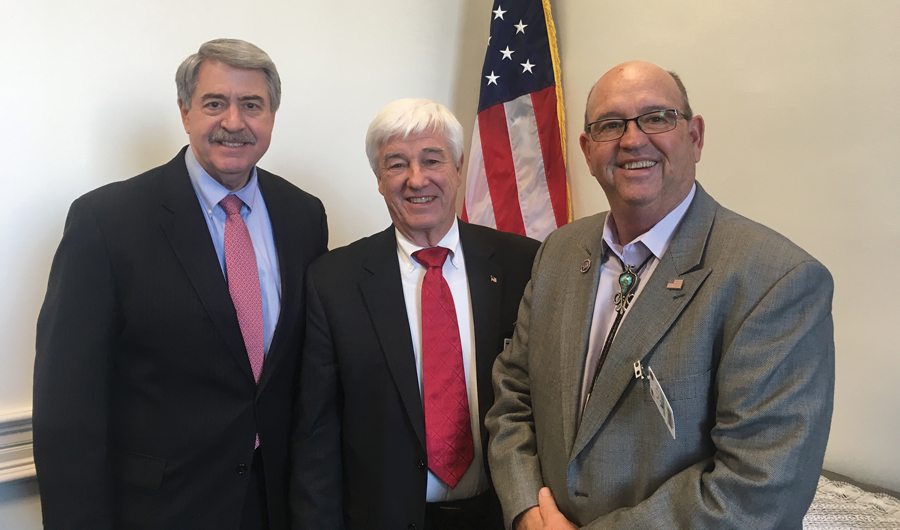 The key point of the meeting was lamb imports. ASI leaders presented the trade picture for lamb – referencing the unregulated flow of cheap frozen lamb to the United States – and the priorities that we are requesting USDA to implement. From access to Japan, Europe and China for American lamb to full use and funding of scrapie eradication and the U.S. Sheep Experiment Station for research, we discussed it all with the under secretary.

First and foremost, however, we asked the department to look at fair trade in lamb. There has been a surge in cheap frozen lamb product moving into the United States market in recent years. ASI asked USDA to prioritize projects that assist the American sheep industry versus the subsidized sheep farmers in the United Kingdom.

For example, USDA can get the M-44 coyote control tool back in full use, fund and support the U.S. Sheep Experiment Station and open up lamb markets such as Japan and Europe prior to reinstating lamb trade from England and Ireland. USDA has several programs and issues that it can resolve for our industry and we don’t have to wait for congressional action to get the ball rolling.

We are pleased to have the political appointed officials at USDA in several of the key posts to work on our requests. The appointment process took way too long in my opinion. We waited out most of 2017 to have new officials in place. The ASI staff can tell you that I have been impatient to get officials to meet with this year. A key part of what the association does is provide education on sheep production and how USDA programs fit (or sometimes don’t fit) our industry. As an advocate for sheep producers, it is our duty to be aggressive and get meetings put together with agriculture leaders who often aren’t familiar themselves with sheep production or wool and lamb marketing.

It was very helpful that ASI is well known at USDA, particularly with the Foreign Agricultural Service. We are a formal cooperator with FAS on wool export promotion and do approximately $750,000 in business with the agency every year. We are certainly appreciative of the assistance we receive and staff we get to work with at FAS to support exports. This year we exceeded 50 percent of the entire American wool clip.

A key statement we shared with the under secretary is that the United States is one of the most open markets in the world for lamb meat, yet key export markets such as Japan, China and Europe remain closed to American lamb. This creates an imbalance in trade experienced by American sheep producers. Markets such as the European Union and United Kingdom maintain significant barriers to lamb imports from the United States and Australia.

We requested that prior to implementing any rule regarding TSE and trade in the United States of animal and animal products, the USDA Scrapie Eradication Program must be updated and adequately funded. We hope the meeting will generate positive results for the American sheep industry.

ASI leaders also met with Wildlife Services officials Bill Clay and Martin Mendoza regarding predator management for sheep producers. The M-44 was the dominant discussion item as the department is conducting the necessary meetings to get this important tool back in full use to save sheep. Wildlife Services will be attending the Annual Convention and hopes to report progress.