Branding our Product for the Market

As sheep producers, we have a commitment to provide the safest, highest quality American Lamb to consumers domestically and globally.

With a stagnant lamb per capita consumption hovering at 0.9 lbs./person/year and decreased U.S. lamb production numbers, it is Australia and New Zealand that have increased American consumer market share. If our goal is to provide a premium, consistent product every time, identifying outliers to consumer satisfaction is imperative. Retail and foodservice entities were asked, “What is Lamb?” in the 2015 National Lamb Quality Audit. The most prominent answer was Young Sheep (32 percent), followed by Red Meat Alternative (25 percent); Delicious and Flavorful Attributes (20 percent); Delicacy, High End Meat (9 percent); and Healthy Protein (7 percent).

So if lamb is defined as young sheep, is that what we are providing our consumer? What has changed, if anything? Should all meat derived from sheep be labeled as lamb? As an industry, we need to find a shared vision that positively impacts our on-farm production with the primary focus of increasing consumption of American lamb.

The clarity of the definition of lamb and industry perceptions have resulted in an interesting twist to the story in 2017. As the North Dakota and Minnesota Extension Sheep Specialist, I was contacted in May 2017 by a small processing plant in east central Minnesota regarding labeling of lamb and mutton. A long-time sheep producer had identified an opportunity to process older ewes and merchandise lamb snack sticks at local farmers’ markets. However, the United States Department of Agriculture, Food Safety Inspection Service personnel at the small meat processing plant determined that due to animal age the aforementioned product could only be labeled as sheep meat or mutton, not lamb. As expected, when the Minnesota sheep producer labeled the specialty products as sheep meat or mutton, they were not as well received by the same consumers even though the product had not changed.

This led to future inquisition with small, medium and large processing facilities on current interpretation of the definition of lamb as predicated on differentiation in the market and labeling for consumers. Leadership personnel within the USDA-FSIS Office of Field Operations and Labeling and Program Delivery divisions were consulted on the correct protocol and compliance for the U.S. sheep/lamb industry. Importantly, there is a distinction in responsibilities of FSIS (inspection and labeling) and USDA Agricultural Marketing Service that delivers marketing claims and USDA grading classification. In order to merchandise lamb within state borders, a processor must be at minimum state-inspected, and federal inspection (is required for interstate commerce. However, USDA grading is optional, paid by the processor, and only accomplished in the largest processing facilities. Today’s estimation is that more than 50 percent of American lambs harvested for slaughter are not offered for USDA grading.

Meat from an ovine carcass is labeled either as lamb, sheep or mutton. It is my sincere attempt to explain the regulatory and current industry application of essentially branding our product in the marketplace. Live animal descriptors of age class based on the 1992 USDA-AMS United States Standards for Grades include:

1. Lamb – an immature ovine (usually less than 14 months of age) that has not cut its first pair of permanent incisor teeth.

2. Yearling – an ovine (usually between 1 and 2 years of age) that has cut its first pair of permanent incisors but not the second pair.

3. Sheep – an ovine (usually greater than 24 months of age) that has cut its second pair of permanent incisor teeth.

After harvest and chilling, ovine carcasses chosen for USDA grading designation may be classified via Quality Grade into three age categories: 1. Lamb; 2. Yearling Mutton; or 3. Mutton. Carcass physiological indicators inclusive of ossification of the epiphyseal cartilage located on the metacarpal (front cannon) bones; width, shape, and color of rib bones; and color and texture of lean determine appropriate product class. The closure of the epiphyseal (growth) plate on the front leg changes from a “break” joint of a lamb to a “spool” joint of a mutton carcass. 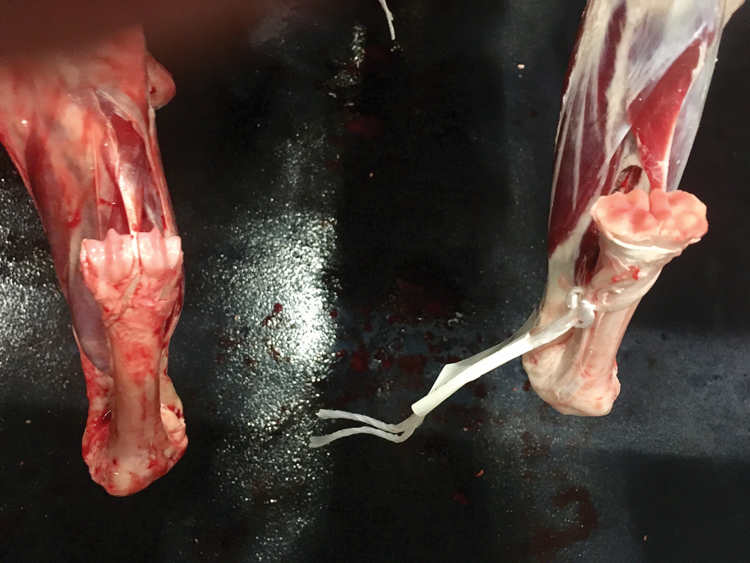 The official use of the age and maturity designation apply specifically to USDA graded lambs. For practical purposes, identification of one break joint (and additional young evidences of maturity) will allow carcasses to be graded as lamb. A carcass with two spool joints will commonly not be presented for grading, and characterized as “ungraded” lamb. While a variety of reasons exist in the ungraded category such as inadequate fat covering, inferior muscling, bucky appearance and advanced age, the majority are because of the presence of spool joints. According to the USDA Labeling Policy Book, the term “yearling” may be used to describe an animal of either sex that is too old to be classified as a lamb but less than 2 years of age. Acceptable terms for meat derived from sheep between 1 and 2 years of age include yearling ovine, yearling mutton, and yearling sheep meat. Processors are required to segregate carcasses and provide product identification to insure that no commingling occurs between qualifying and non-qualifying products.

The greatest lack of clarity within the U.S. production system is not segregation of young lamb from mutton, but the intermediary classification of “old-crop lambs” that may be 12 to 16 months of age. Anecdotal evidence from Lamb 300 sessions across the United States have identified loin chop palatability the same, or even better, for this age group. We also know that seasonality and year-long supply of fresh American lamb might be the greatest challenge for uniformity and consistency of merchandised product.

On Oc. 24, 2016, USDA published FSIS Directive 6100.2 that provided direction to field staff regarding post-mortem livestock inspection. The directive’s purpose was to instruct the inspectors on the differing food safety inspection procedures that should occur between lambs and older sheep.

Since there is not a documented clarification for lamb under the Standard of Identity, but instead one sentence in an FSIS directive, there might be discrepancy of deemed compliance across the industry. Enforcement and interpretation of FSIS Directive 6100.2 defined that “A young sheep or lamb (ovine) carcass meets the following criteria: written documentation that the ovine is less than 14 months of age or the presence of a break joint (epiphysis) of the distal metacarpal bone of either foreleg.” Additionally, according to USDA personnel, the non-eruption of the first pair of permanent incisors is also considered adequate support for labeling sheep as lamb.

There might be a disparity between the label designation of lamb and mutton, and with industry and government application, at the very least, there is a lack of uniformity in labeling and marketing. With respect to the Code of Federal Regulations published Standard of Identity, USDA-FSIS does not have a specific definition for lamb, nor explicitly identify boundaries for age of animal in product labeling originating from ovine species. The only age-specific labeling claim includes the term “spring lamb” or “genuine spring lamb,” applicable only to carcasses of new-crop lambs slaughtered during the period of March and the first week of October.

The USDA-FSIS has combined the 6100.2 Directive regarding lamb labeling with the Code of Federal Regulations (9 CFR 317.8) pertaining to false or misleading labeling or practices. USDA-FSIS personnel indicated that to label product as lamb that does not meet the FSIS policy on lamb labeling is false or misleading. All lamb is inspected for wholesomeness. However, since grading is not mandatory, the overall quality of ungraded lamb is unknown – it might be higher or lower than USDA-graded lamb found at retail.

The Lamb Industry Roadmap identified product characteristics as a major goal and indicated a necessary prioritization to make American lamb a premier product every time. Uniform application of a narrowed and more specified definition of lamb by FSIS Directive 6100.2 might affect lamb value and the market. And while it can be stated that the aforementioned directive did not change the labeling and marketing landscape, inconsistencies in enforcement has presented an additional challenge as we work to provide a consistent and profitable lamb product.

A common interpretation would be that meat from young and old swine is termed pork, meat from young and old cattle is termed beef (excluding veal), why must there be lamb, yearling mutton, and mutton labels from meat originated from sheep? The 2015 National Lamb Quality Audit identified eating satisfaction, more specifically flavor, as the key quality attribute. Interestingly, sheep producers may provide both sides of personal experiences of either consuming an old ram/ewe harvested at home or the local butcher with either resounding positive experiences or negative repercussions. It would be unjustified to presume that a shift in application of labeling lamb would not come without hesitation, and inevitably, changes in market structure.

Overall lamb flavor intensity is a derivative of amount and composition of branched-chain fatty acids, primarily in adipose tissue. Research suggests with increased animal age, meat flavor of ovine-species specific flavor increases. In fact, in my experience, I have had mutton embraced only by trendy food-forward butchers in Austin, Texas, and meat enthusiasts that embrace nose-to-tail fabrication. Advanced age of animals leads to a darker color due to increased myoglobin, increased collagen content and decreased tenderness (primarily of shoulder/leg). Flavor intensity has been presumed to increase with age, but quantity of subcutaneous and intermuscular fat and diet prior to slaughter can shift flavor profiles potentially greater than age alone. Research most recently completed at Colorado State University did not identify an increase in flavor intensity with age among treatment. More importantly, off-flavor prevalence was not different for lamb and yearling, but increased for mutton. Current research funded by the American Lamb Board is evaluating production speed identification of lamb flavor based on volatiles and fatty acid composition.

As an industry, I look forward to future dialogue on developing a shared vision toward a quality product through labeling and marketing of American lamb that creates increased consumer demand and profitability.