“The difference between an average animal and a really good animal is huge,” says Zach Meinders. “You have to have a handle on the numbers. That and genetic progress go hand and hand.” 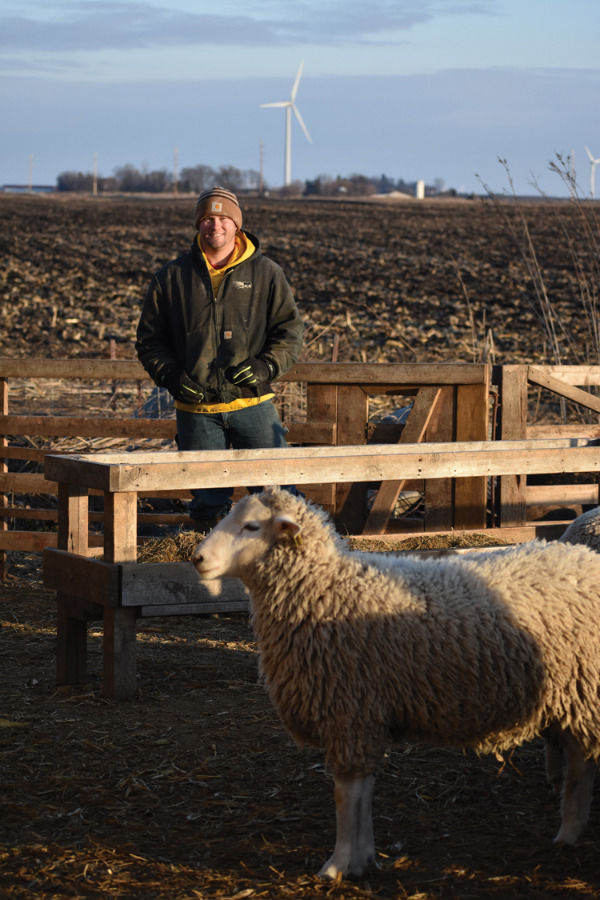 Meinders and his brother, Jake, started raising livestock after graduating from South Dakota State University. At age 27, he is focused on the future and raising the best stock he can.

Meinders Stock Farm raises corn, soybeans, cattle, sheep and hogs. They purchased their first purebred cows and ewes in 2010, and have grown the herd and flock to around 100 of each. The sheep flock is primarily Polypay, with lesser numbers of Katahdin and Romanov. This is Meinders’ third year in the National Sheep Improvement Program.

“We knew when we started our beef seedstock operation we had to focus on Expected Progeny Differences to move the genetics as rapidly as we could,” says Meinders. “When we purchased our first ewes from the University of Wisconsin and attended the Center of the Nation Sale in Spencer (Iowa), we knew we had to look into using Estimated Breeding Values on our sheep. It was obvious that’s the way the sheep industry is going.

“Producers who are breeding based only on weaning weights or phenotype are missing out,” continues Meinders. “That hardly tells any of the story. Either one can be influenced by the environment or feeding practices. We won’t buy a ram without EBVs. It’s just too risky.”

While genetic progress in their sheep flock happens at a much slower rate than their beef seedstock herd – due to the beef industry’s decades of EPD emphasis and strides in developing genomic testing – Meinders says it is easy to see improvement, especially in lambing rates and growth.

Progress is also slowed by concentrating on maternal breeds and maternal traits compared to beef’s emphasis on carcass traits. “When you’re talking about milk or lambing numbers, you don’t really learn about a ram until his daughters are 2 to 3 years old, where we’re breeding yearling and 2-year-old bulls based on genomic numbers. The dairy industry turns around even faster.”

The size of the national beef herd also affects the rate of genetic progress. A larger database makes for better accuracies, and makes it easier to identify outliers that might show up infrequently in a small herd or flock.

“That is certainly a hurdle we’ve had to overcome in the sheep genetic analysis; having a robust dataset for higher accuracy,” says NSIP Program Director Rusty Burgett. “We’ve made huge strides in the past few years getting more animals in the system. We now have more than 300,000 animals in the NSIP databases with records. That means higher accuracies and ultimately a powerful tool that can help sheep producers across the United States.”

For those intimidated by calculating the numbers, the system of indexes helps immensely, especially when the focus is on multiple traits.

“An index like the U.S. Maternal Index was fine-tuned to select ewes that will maximize productivity and ultimately profitability,” explains Burgett. “It balances reproductive performance with growth and maternal ability to favor ewes that will have multiple lambs that will grow and raise them all. Other indexes will select animals for both lamb and fiber production like the U.S. Range Index, or to maximize lamb growth and carcass cutability like the Carcass Plus Index. Each one selects animals for a specific purpose, but all have the end goal of increasing returns to the producer.”

Improvement is what it’s all about for Meinders.

“We still look at the individual numbers to see how a potential ram will fit in our flock,” says Meinders. “Every piece of performance data in multiple areas needs to be in line for us to make significant improvement. And, of course, they have to also be structurally sound. But the indexes simplify the process.”

That’s especially true in an operation that focuses on the benefits of crossbreeding. Their Stabilizer cattle are a four-breed composite, much like their Polypay sheep.
“We are strong believers in hybrid vigor and heterosis,” Meinders says. “You can retain 75 percent of heterosis without a complicated breeding system. But you can’t do it without looking at EPDs or EBVs.”

Meinders says he expects soon both sheep seedstock and commercial producers will only buy animals with EBVs.

“The NSIP sales are getting stronger and more new members are coming on board. It’s easy to see it’s the fastest way to make progress. Again, there is a huge difference between the really good animals and the average ones. Both purebred and commercial producers won’t be willing to take the risk of not buying the best they can.”