Idaho Sheep Dairyman Recognized for Mentoring the Next Generation

Bee Tolman, president of the Dairy Sheep Association of North America, admitted to me during the group’s annual symposium that she “couldn’t sell a potato to a starving man.”

Kendall Russell – who was honored with the 2018 DSANA Mentorship Award – is the exact opposite. The Idaho dairyman and cheesemaker thrives on interacting with his customers. Nearly a decade ago, that comfort he felt in relating to people across the table at farmers markets in Idaho and Wyoming was a crucial component of his success. Today, he’s just as likely to be cooped up in his office working his magic on the phone. Either way, I get the feeling he could – as the old saying goes – sell ice to an Eskimo. 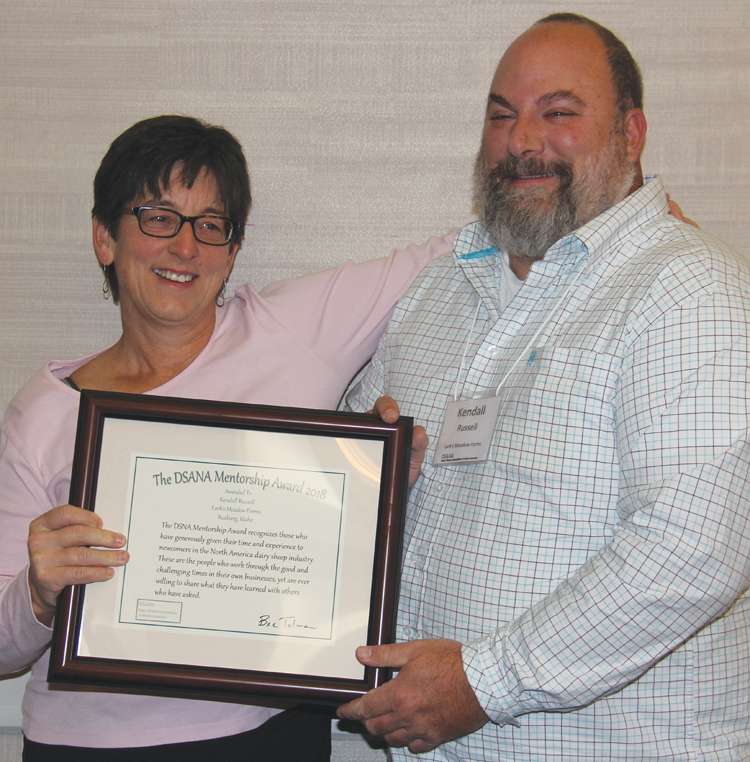 “I really enjoy that connection I get from watching someone try my cheese for the first time,” he said. “It’s like going to the dentist. You can say you’re not in any pain, but he knows. I can tell the minute someone tries my cheese if they like it or not. Most of the time, they do. That’s a really rewarding experience. But one of the painful realities of the future is that in another year or two, I’ll be too busy making the cheese and running the business to do that on a regular basis. I use to be able to wear all of the hats, but now I’m having to learn to turn some of those things over to other people.”

Kendall shared the story of the rise and fall of his family’s operation during a school of hard knocks style panel discussion on the first day of the two-day symposium in Kansas City, Mo., in November. It was obvious that he’s a people person, one who is comfortable sharing his own story with a sole customer or a room full of dairy producers.

I get the feeling Kendall is like my son, who can walk into any room full of strangers and have a new best friend in five minutes. Kendall earned the DSANA Mentorship Award based on the bond he’s developed with his interns through the years. He was nominated specifically by current intern Hannah Walker, who came from Pennsylvania to work at Lark’s Meadow Farms in Rexburg, Idaho.

“Sometimes you don’t know if you’re really having an influence on them,” Kendall said of his interns. “I invest a lot in the people who come to work on our farm, so it means a lot to me that I received a glowing recommendation from Hannah.”

The farm started with a five-gallon pot and is now making arrangements to accommodate a 300-gallon cheese vat in the converted pole barn that is home to office space, the milking parlor and the cheesemaking operation.

“We’re right at the 10-year mark now, so I think we’re almost good at it. The cheese is my passion, but it’s also been a good money maker. As a farmer, it’s nice to have a product that sells well,” said Kendall, who hopes to build an operation he can leave to his six children, who range in age from 24 to 2. “They all pitch in, even the youngest one.”