Lamb wasn’t on the menu at the Dairy Sheep Association of North America’s 24th annual Symposium on Nov. 8-11 in Kansas City, Mo. But there was plenty of cheese, which is a testament to the group’s shifting priorities.

There was a time when the majority of DSANA’s membership – associate members of ASI – focused on simply milking sheep. The raw milk was then sent on to processors – in fresh or frozen form – outside of the livestock industry who turned it into end-use products such as cheese and yogurt. Today, however, sheep dairies are just as likely to keep the milk to meet their own production goals. 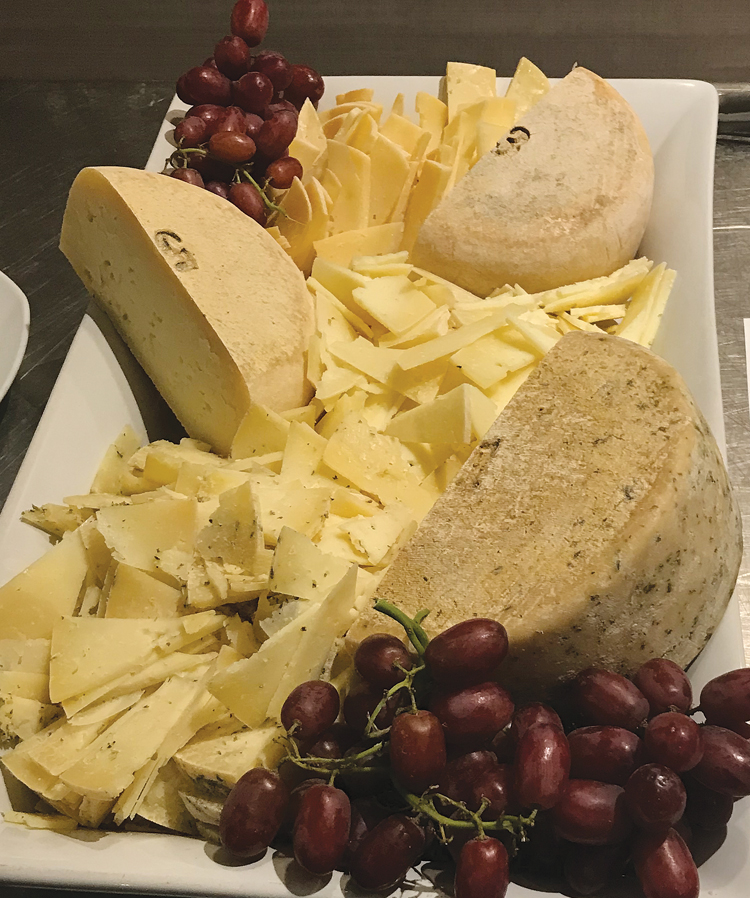 “We probably should be called a dairy and cheesemaking symposium,” said producer Bill Halligan, and old-school sheep man who spent years raising meat sheep, as well as buying and selling sheep in the Rocky Mountain region before creating his own dairy in 2005. “The only reason we don’t focus more on cheesemaking is because there are plenty of places out there where people can learn that. A lot of our members are making their own cheese or yogurt, but our focus has been teaching them to market and diversify their operations.”

As a dairy owner who doesn’t process his own milk, Halligan finds himself in the minority at the DSANA Symposium these days. But with 600 ewes back home in Nebraska, he said there’s still plenty to learn from the meeting.

“We’ve always been about doing the dairy side as well as we could,” said the former DSANA president. “Looking back, sometimes I wish we’d gotten into processing. It would probably be cheaper to do that than it is to double the size of your dairy. Processing just opens up the door for so many more customers. I’ve never had any problem selling my milk, but there are only so many people looking to buy frozen sheep’s milk these days.”

Halligan’s customers include those old-school processors who simply want to buy milk, as well as other sheep dairies who need extra milk to support year-round production of cheese and yogurt.

“Hard cheeses are aged, so they can build inventory for the offseason,” Halligan explained. “But the yogurt and soft cheeses don’t have as long a shelf life, so they need a steady stream of milk to keep making those products year-round. Because of the shorter shelf life, it’s harder for the European cheesemakers to flood the market with those soft cheeses.”

DSANA President Bee Tolman of New York said in the early years the symposium always included at least one session related to freezing milk to sell to processors. Those sessions are no longer needed, and have been replaced by education geared more toward the next generation of dairy sheep owners, who are more intent on selling a consumer product.

California’s Lesa Gibbs plans to get a look at both sides of the industry in the coming years. A nurse by day, she and her husband (retired military) are all set to start milking a flock of more than 300 in January. Initially, they have a contract with a creamery to buy all of their milk.

“But I want to be a cheesemaker,” Lesa admitted. “Eventually, we want to be making our own cheese on site. We’ve set up our breeding groups so that we can be milking year-round and have been breeding and buying stock for the last couple of years. We put a lot of time and research into this project and we want it to be profitable. One suggestion I got from several people was to know where my milk was going before I started milking.”

Seems like reasonable advice, and yet there are those who have delved into the industry without taking that extra step. And, as Halligan said, there are only so many people looking to buy large quantities of sheep’s milk these days.

“It’s not enough to just milk sheep,” Gibbs said. “We have to know where that milk is going to go and how it’s going to give us a return on our money.”

Day one of the symposium focused on helping those who are new to the industry do just that. Yves Berger of the University of Wisconsin-Madison opened the meeting with a session on Creating an Economically Viable Sheep Dairy in 2018. Oregon State University’s Catherine Durham followed with The Economics of Farmstead Artisan Sheep’s Milk Cheese Production. Both sessions were heavy on spreadsheets and economic formulas.

“I was excited to see that, because I’m a spreadsheet queen,” Gibbs said. “I’m kind of a spreadsheet nerd, but I’m always analyzing my spreadsheets to see where we’re at, and we haven’t officially even started yet. Going through sessions like that will make you take a really hard look at your business, especially if it’s the way you plan to make a living.

“But the panel discussions were probably the part of the conference that I got the most out of,” Gibbs said. “I was able to get the benefit of other people’s real world experiences from those sessions, which can be more valuable sometimes than just looking at the numbers on a spreadsheet.”

A producer panel featuring Montana’s Jim Ashmore, Idaho’s Kendall Russell and New Jersey’s Bill Simmerman provided those on hand with a look at “what went wrong, what went right,” in starting their various operations.

“That whole first day of the conference was a real eye-opener for me, and I felt like I’d done an awful lot of research as we’ve worked to get this business started. I just found the DSANA group online a few months ago, but I knew as soon as I saw it that I had to come to the symposium.”

Tolman said the symposium is so important because there are a definite lack of resources on sheep dairying, even in the information age.

“There’s no mass of resources for sheep dairying like there is for farming or running a cow dairy. The only place you can really find a collection of information on our industry in North America is through this symposium, which is now in its 24th year. To last in this industry, you’ve got to be smarter than the average bear, and you’ve got to be very entrepreneurial.”

One way in which the industry has shown its entrepreneurial side is by taking part in the agri-tourism movement that seems to be sweeping the United States. A hundred years ago, everyone either lived on a farm/ranch or had family who did. But now that much of the population is completely removed from agriculture, the agri-tourism trend is hot.

The symposium offered a second panel discussion with three producers who have added agri-tourism to their operations. For some, it’s about education. For others, it’s about making a profit. But the two aren’t mutually exclusive.

“It’s one way in which I market and advertise my product,” said South Carolina’s Debbie Webster, who was joined on the panel by Jessica Gigot of Washington state, and Ana and Greg Kelly of Alabama. “If all I cared about was making money, I’d probably be doing something other than running a sheep dairy.”

Webster said those who book farm visits are looking for three things: education, entertainment and engagement. Farm owners who aren’t willing to provide all three need to make that clear before anyone arrives on the property. Can farm tour participants touch your animals? Will they even see the animals? Can they feed them or help with other tasks around the property?

The Kelly’s are just getting started with their agri-tourism adventure as they host school children and other groups, but say it’s added $7,000 a year to bottom line with minimal effort.

“But we’re limited by time and labor right now,” Ana Kelly said. “To take it to the next level, we would need to make more of an investment in it.”
Gigot has taken a slightly different approach, listing an old cottage on her farm as a nightly rental, as well as hosting workshops that center around the farm’s animals and resources.

“It is important for a farm to discern what they want to get out of any agri-tourism endeavor,” Gigot said. “As a teacher at heart, I am excited about welcoming people and using the farm as a teaching tool. However, hosting can be a lot of work.”

Dairy sheep, in general, are a lot of work, Tolman said.

“This is an avenue of sheep farming that people look at it and think, ‘I can do this.’ That’s how I got started. I grew up on a cow dairy. I couldn’t afford that, but I could afford a sheep dairy, so that’s what I did. But, it’s really tough. You don’t come into this to be the next Bill Gates.

“That’s why our focus is to provide those who are fairly new to the industry with the information they need to sustain themselves in this business.”