With funding from the American Lamb Board and the goal of increasing awareness about American lamb, the Wyoming Wool Growers Association, Mountain States Lamb Cooperative, University of Wyoming and UW Extension partnered to bring chefs and food service distributors to Laramie for a two-day intensive workshop in late October.

“We wanted to determine what barriers there are to putting American lamb on menus and break those barriers down,” said Whit Stewart, UW Extension sheep specialist. “I think we accomplished both of those goals.”

With lamb consumption on the rise, Stewart said millenials appreciate the strong flavor profile of lamb, and data suggests lamb is a product that is increasingly popular on restaurant menus, so there are opportunities to engage chefs.

High-end culinary professionals, including hotel and restaurant chefs, catering companies and food service distributors from Wyoming and the Front Range of Colorado were invited to Laramie for the event, which included classroom demonstrations, hands-on workshops and an in-the-field look at lamb production. 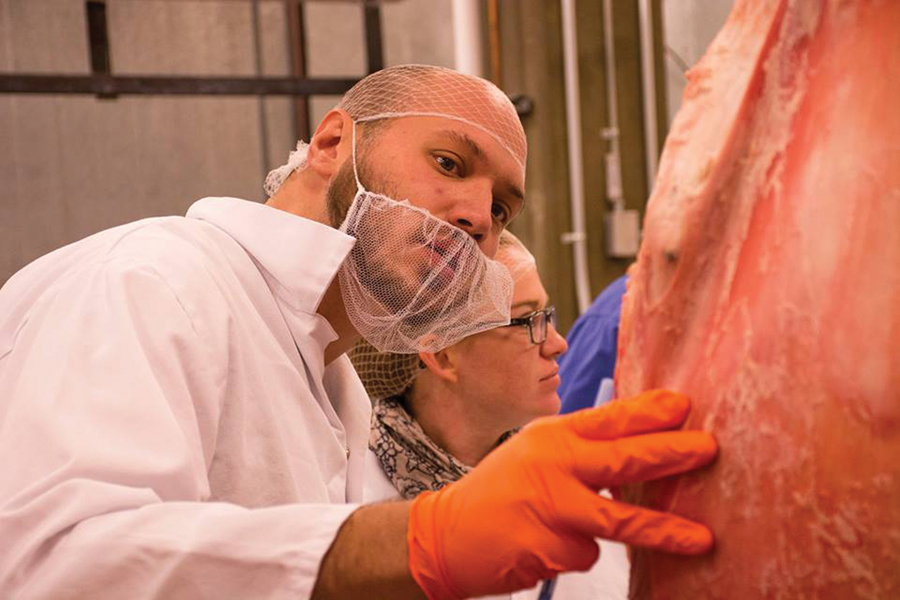 “On the first day, after we talked about our goals and the unique partnership between UW, MSLC and WWGA, we jumped right into lamb carcasses and grading,” Stewart said. “We looked at 10 carcasses and talked about how we currently grade lamb, for both quality and yield.”

In the classroom, chefs had the opportunity to trace loin eye, measure back fat and more, followed by in-depth discussions about institutional meat purchase specifications.

“Warrie Means is an excellent teacher and really walked through how lamb carcasses are graded now compared to how they used to be fabricated,” Stewart described. “He also looked at emerging trends.”

Mckensie Harris, a new instructor at UW, was also instrumental in providing information.

During the second day of the event, participants went to UW’s meat lab again and looked at modern lamb carcass fabrication.

“All the chefs wanted to get their knives and join in the fabrication. There was a lot of good conversation that occurred, talking about using different muscle cuts,” Stewart continued. “These chefs are confident and masters of their trade, but they would give hints as to new things they were walking away with.”

One particularly notable aspect of the event was a pasture-to-plate tour of UW’s facilities, where chefs were given the opportunity to look at the entirety of the sheep production system.

“On the first afternoon, we walked everyone through sheep production,” Stewart said. “We started on pasture where we have ewes with rams. We talked about breeds and how unique sheep are. This was a good learning exercise because we were standing on a rank grass pasture talking about how sheep use the low-quality ingredient to create a high-quality protein.”

Specifically, Stewart added one of his main goals was to showcase commercial sheep production, noting, although producers work in economies of scale, it does not mean they are not sustainable.

“It was an ‘ah-ha’ moment for some chefs, who realized that we use by-products and low-quality feed resources to produce a high-quality meat,” he added. “We also walked through the lamb feedlot and talked about how we tailor rations to string out the supply of lamb.”

During production conversations, Stewart was able to dispel myths about commercial lamb production, including misconceptions about the use of high-energy feed grains.

“For example, one attendee didn’t realize that we couldn’t have grass-fed product year-round,” Stewart said. “We walked through the production system to see that the lamb industry is truly sustainable, but there are a lot of challenges. Understanding the challenges ranchers face seemed to inspire chefs to get more lamb on their menus.”

Bridging the gap between the sheep industry and the restaurant industry was a main goal of the event, and Stewart said that the challenges that were perceived by lamb industry representatives were not necessarily the challenges faced by chefs.

“These chefs work with major food distribution channels, but finding American lamb is hard,” he commented. “Food distributors don’t feature it in their order catalogs.”

“It was interesting that the barrier isn’t necessarily on the price point, where we thought it is. Really, the barrier is in accessibility,” Stewart continued.
Establishing relationships with partners such as Mountain States Lamb Cooperative proved to be essential during the event.

“The resounding themes after we finished also included the versatility of using leg steaks, shoulders as a pulled lamb and different cuts for appetizers,” Stewart said. “I think everyone thought about using less traditional cuts to make more money and add lamb to their menu, outside of just a rack of lamb or lamb chops.”

Among the many positive aspects of the event, Stewart said many attendees were struck by the cooperation between the public institution and industry stakeholders.

Additionally, Stewart explained that, in culinary school, many chefs expressed they learned about cuts, but they learned less about the process of aging and the other meat science topics.

“They were really passionate in talking about meat science,” he continued.

When asked why chefs do what they do, Stewart explained that many of them commented they cook to eliminate barriers and differences in people.

“When people share a meal, they are more unified,” Stewart said. “When we looked at the production cycle and talked about the challenges that ranchers face, a light bulb came on for these chefs. They expressed how we need to tell our story better.”

The idea that lamb from Wyoming, Colorado or Montana supports local economies also helped influence chefs to commit to sourcing only America lamb.

“I think these conversations are going to last more with the chefs than anything else,” Stewart emphasized. “Most of all, through this workshop, we created allies for the lamb industry.”