A light breeze blew in off the bay on a cool San Francisco summer day as the aroma of lamb swirled in the air. The best place to take it all in was a small hill just outside the back door of the Golden Gate Club, located on the Presidio campus that overlooks the iconic Golden Gate Bridge.

The view, the breeze, the lamb, it was all there just out that back door. At first, it was mostly restaurant staff and Lamb Jam volunteers who took a few steps out back just to cool off and enjoy the view. Two hours into San Francisco’s annual Lamb Jam, people were lounging all across the hillside. Some needed a good place to give in to a meat and wine-induced coma, while others just wanted to soak in the overwhelming atmosphere. 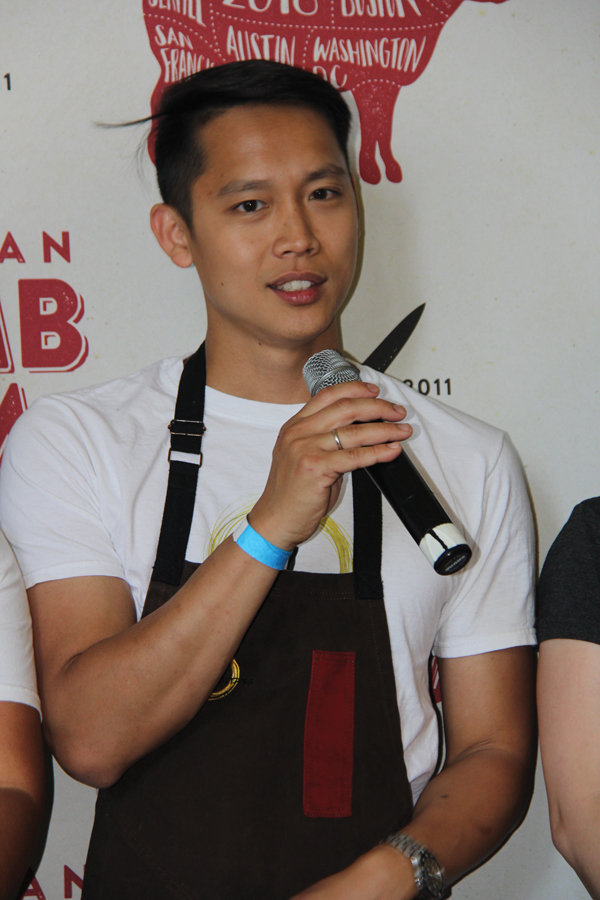 A small parking lot just to the side of that hill became the temporary home of a couple of fryers that produced the most amazing Lamb Adobo Empanadas. The crowd headed for the back lawn the same way your friends congregate around the kitchen in your home, and the alluring smell of the empanadas played a role.

Here’s a key to picking the winner at Lamb Jam events sponsored by the American Lamb Board: look for the booth that is constantly needing to restock its dish. Pinoy Heritage’s empanadas proved so popular that the pop-up restaurant’s staff was constantly shuttling fresh food up that hill. Inspired by Francis Ang’s Filipino roots, the empanadas were the result of months of travel through the country by Francis and his wife, Dian.

“We’d been traveling all the regions of the Philippines, and in Vigan in the northern part of the country, they are famous for their empanadas. We met with the old ladies coming out of their kitchens and learned from them, and this was a result of that,” said Ang after Pinoy Heritage won three awards at the 2018 San Francisco Lamb Jam: best in show, people’s choice and best Asian.

Giant banners at the Golden Gate Club offered the Lamb Jam slogan: Local lamb, global flavors. Pinoy Heritage’s dish certainly combined those two attributes as well as any of the 12 dishes in the running for best of show.

“It’s freaking awesome,” said Ang. “We are here just to hang out and have a good time. Obviously, we were hoping to win. We loved the dish from the beginning. We’re super stoked about qualifying for the finals. My wife is pregnant and she’s due in October (when the finals are scheduled), but we’re going to figure it out.”

Learn more about the pop-up restaurant at PinoyHeritage.com.