A starter flock recipient early in life, Katie Forrest got away from the sheep industry as she headed to college and eventually settled into her role as wife and mother. Nearly two years ago, she returned to her roots when the family purchased a home and land in Shedd, Ore., and got back into the business of raising sheep. She attended the National Lamb Feeders Association Leadership School earlier this year and left with plenty of ideas for her own operation. 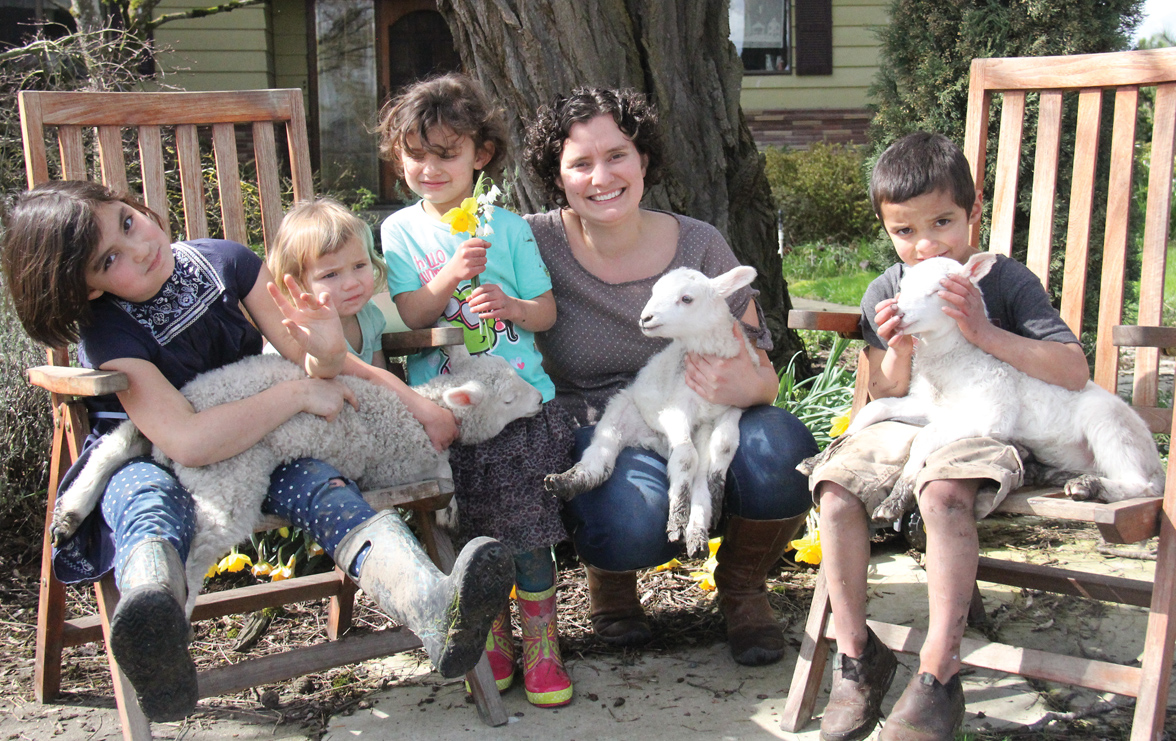 I grew up in 4-H with sheep. I started with Romneys and grew that flock until I went to college. I sold them off and went to school and got married and moved to the city. We finally got the opportunity to move back out to the country and sheep were at the top of our list when we got here. I grew up in southern Oregon and went to college in Corvallis (Ore.). About a year and a half ago we moved to Shedd. We were thinking of going into hair sheep, so we bought a flock of Katahdins. But I grew up with Romneys and I said to my husband (Rich), these just aren’t sheep to me. I’m also a hand weaver, so it just seemed silly to me to have hair sheep. He said, “As long as you shear them, choose whatever you like.” So, we chose Border Leicesters and we’re going to take our flock that way.

I hadn’t worked with this breed before. When we decided hair sheep weren’t our first choice, we did a lot of research. We thought that Border Leicesters would be a good fit for us. They are very attractive sheep, very perky, very good mothers, easy to shear. They don’t have a lot of facial or leg wool. We enjoy the more heritage breeds of animals. I think it’s important, especially when you’re raising them on a small scale, to have an affection for the animals you’re raising. Part of that for us is the breed and the history of the breed. It’s true that you have to raise the sheep you like. They’re the ones you’re going to be excited to deal with when you have to get up in the middle of the night to check on them. Even after raising them for a while now, I still love them.

We’re trying to get a flock where we just like all of the sheep in the flock and they do well on our property and with our management style. I’d like to grow to between 30 to 50 ewes; I’m not looking for a huge operation. We’re planning on direct marketing the meat. My husband (a structural engineer) works in an office in town and there’s a huge demand in this area for local products from family farms. I don’t think we’ll ever be big enough to have to go to all of the farmer’s markets. I’d like to just develop a client list from friends and family and word of mouth that can handle the fairly small amount of meat we produce with the flock.

We have four kids that I homeschool. Georgette is 8, Richie is 7, Audrey is 5, Beatrice is 3. They are each taking their own interest in the sheep. Georgette is going to retain one of the ewe lambs and start her own flock. Richie picked a ram lamb that he’s going to sell for meat. So they kind of have different goals. They are developing their own interests. Georgette is really into doing everything with the sheep. She wants to be there to help dock the tails, give shots and be very hands on. Richie is more into the chickens. Audrey just likes the baby animals. Rich grew up with a herd of goats, so it didn’t take much to convince him to have sheep.

This year, I just jumped in and sheared the sheep after watching a few YouTube videos. It didn’t go quite like the videos, but all of the wool came off and all of the sheep were happy. I’m hoping to get to a shearing school in the next year or two. It’s so hard to find a shearer for small flocks. It’s a huge problem in this area. That’s another reason that I’d like to learn is so that I can shear my own sheep, but also some of the other small flocks in the area. Shearing went as planned because all of the wool came off, but it didn’t look like the most graceful thing. It didn’t look anything like the videos. That was my only training. By the last one, I was a lot better and a lot faster. It came off and we had beautiful wool.

Coleen (Smith) has been an excellent mentor for us. She’s kind and generous with her time and experience. We chose Border Leicesters, so we were searching for people who raise them in Oregon. She invited me to come up and see what she was doing.

What really surprised me about getting back into sheep is the parasites. I don’t know if it was because I was just too young to deal with it or because of where I lived as a kid, but I don’t remember it being such an issue the first time I had sheep. That was a surprise and a learning curve. We’re not going to worm everyone, just the 20 percent that looks like they need it. We’re doing fecal tests to follow up and find out if this wormer was effective. We have a group of sheep and we can spot the ones that didn’t do well, but the wool hides a lot sometimes. Our first goal has been to deal with the parasites.

The leadership school was such a great opportunity to see what others in the industry are doing. The school inspired us and helped us hone in on our niche. Most importantly, I had the chance to meet some great people in the industry.