The Sheep Industry Comes Together in Utah

Standing in a cold, snowy barnyard measuring and discussing sheep scrotum was almost enough to make me rethink my career choices when I traveled to Utah in mid October. It was truly a case of getting more than I bargained for. 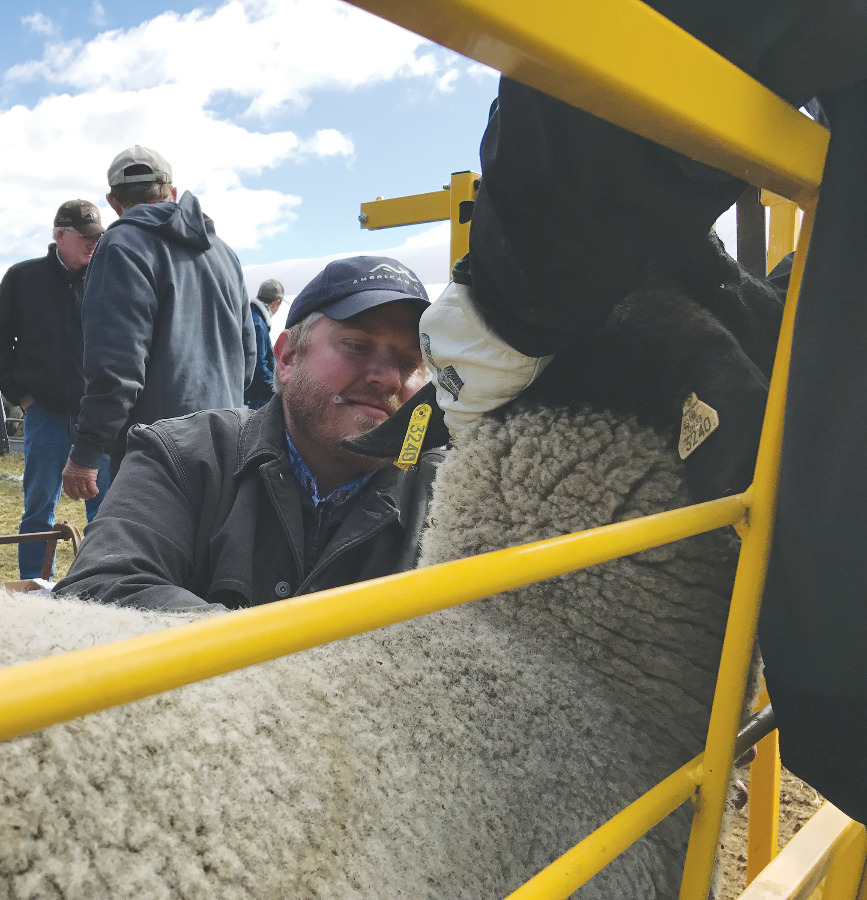 I was there to take part in the meeting between breed associations and the National Sheep Improvement Program, but it was sort of a combination trip for several industry folks as Utah’s Leading Edge group took time to examine the Suffolk rams that will kick off the second year of a breeding project funded by ASI’s Let’s Grow Committee.

Everyone on hand – from breed association reps to sheep producers – took part in an educational challenge that required them to pick out the best rams based on visual appearance as well as NSIP provided data. Who was right? Who was wrong? Well, we won’t know those answers for a year or more, but there was no end to the discussion that ensued. Then, it was time to collect even more data as each ram was weighed, photographed and had blood drawn.

“This is great,” said ASI Secretary/Treasurer Susan Shultz of the collection of sheep industry folks who pitched in to complete the record collecting process in short order. “We’ve got nearly every facet of the industry represented here today, and we’re all working together to get the job done.”

It couldn’t have been a more perfect metaphor for the weekend, which devoted two days to looking at ways to improve every sector of the sheep industry. There’s little doubt it’s going to take everyone pulling together to keep our industry headed in the right direction.

I should mention that even though there’s a Let’s Grow grant involved, nearly everyone involved in the process – from seedstock breeders to sheep producers to the packing house – is getting the short end of the stick on their normal fees to make the project work. It’s not about making a few people rich, it’s about developing a system that will best serve the entire industry.

Much like the cattle world, we’re looking for ways to produce more and more with less and less. That means more lamb and more wool with less sheep. We know it can be done. We’ve seen it done in other livestock industries, and now it’s our turn. ASI, Let’s Grow, NSIP, the National Sheep Industry Improvement Center and the American Lamb Board are among the groups leading the charge. Thankfully, we’ve been working together in this process in recent years.

“The support from Let’s Grow has been integral to the success of NSIP,” says NSIP Executive Director Rusty Burgett, pictured at right as he draws blood from rams in the Leading Edge program. “With that support, we’ve been able to triple the number of flocks we’ve registered in the last three years. It’s been a night and day difference from when we started before Let’s Grow. We’ve been fortunate to receive several grants and been involved in countless others. We’re really optimistic that so many groups are looking to improve the adoption of quantitative genetic selection. The round one grant was a major educational effort, a big push to spread NSIP education throughout the United States. It helped me to reach 30 different audiences and really put NSIP on the map of the American sheep industry.”