Long before the sheep head south on Buck Highway through the center of Bayfield, Colo., festivities for the 2017 Bayfield Heritage Days have been canceled due to rain and lightning. Regardless, the sheep are on the move. It’s day three of trailing from their summer home on U.S. Forest Service allotments in the mountains to the ranch headquarters in Ignacio, Colo., and everyone from the animals to the herders to sheep producer J. Paul Brown are ready to be home. 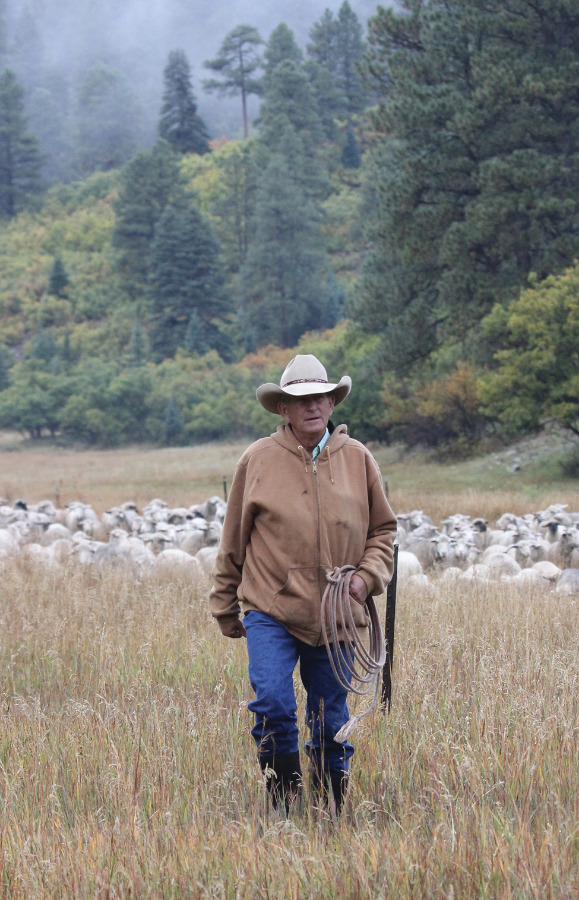 “They can cancel everything else, but there’s no stopping the sheep,” says J. Paul, dressed in rain gear from head to toe and still likely soaked to the bone. “We’ve got to get them home, so that’s what we’re doing.”

What started as a decent crowd of damp onlookers has diverged to no more than a handful of hardy souls as the rain grows steadily heavier on a crisp, late September morning in southwest Colorado. They watch for a few minutes as the sheep navigate their way past Mill Street – the one-time center of town that was supposed to host a human parade following the wild and wooly procession.

“I sure wish we’d had better weather for them,” J. Paul says. Not that it matters much for him what the weather brings. “People just love to watch the sheep go through town.”

Approximately 2,000 sheep trailed into a valley just off County Road 240 some 12 miles from Bayfield on the Thursday before the annual Heritage Days festival was set to begin. They spent the night there with a herder and two trusty guard dogs. On Friday, they made a 12-mile push into Bayfield’s north side. Many of the sheep know the way as well as any human might. Once they get back on 240, it’s only three-quarters of a mile to a right-hand turn onto County Road 501 that takes them straight into town.

Houston and Geri Lasater began the tradition some 15 years ago after hearing about a similar festival – presumably Idaho’s Trailing of the Sheep. Having purchased sheep and grazing allotments from the Brown family, J. Paul was high on the list of area producers they called upon to help with the endeavor.

“I could just see the trouble of going through town with all of the people and the sheep all over the place,” J. Paul says. “But they asked for help, so we helped. From there, we got behind the idea 100 percent. We did it for a lot of years using their sheep before they decided not to do it anymore. That’s when Luke (one of four sons of J. Paul and Debbie) and I decided to take it on. We just get so much good publicity out of it that we couldn’t let it die. We end up coming out of the mountains with this band about a week earlier than we used to, but we feel like it’s worth it.”

When the Lasater’s opted out of the sheep business, J. Paul bought back the flock and permits his father had sold to them years before, so its only natural that the two families helped establish the town’s sheep tradition.

“It was time for us to expand a little because we have two boys – Luke and Levi – who want to be in the sheep business,” J. Paul said. “The kids are making a lot of the decisions now. Levi’s band is pretty much his own, while Luke and Stacy and Debbie and I are partners on the rest. But Luke’s the one making a lot of the decisions. He’s a doctor of physical therapy, so he’s done that and made some money. He just really likes ranching and likes the sheep.”

While ranchers are notorious for getting an early start, J. Paul’s crew waits until about 8:30 a.m. to start pushing the flock toward the main road. This is by design, allowing morning traffic and school buses to clear the area before the road becomes nothing more than a woolly mass. It will take two to three hours to make the first third of the day’s journey to an open field surrounding the fire station. After lunch (for both the sheep and the crew), it’s eight more miles to the high school, where the flock spends the night in preparation for its run through town on Saturday morning.

“Most people just love seeing the sheep,” says J. Paul, admitting that the lambs he ships out are the only members of the flock who will ever see a truck. “I brag that our operation is about as green as you can get. We trail to winter range in New Mexico, we trail to the mountains in the summer and back down to the ranch in the fall. There might come a time when we can’t take the traffic anymore, or when the traffic can’t take us. But so far we’ve been able to make it work.”

Summer brings a bevy of tourists to the area, and most love nothing more than getting stuck in a traffic jam of sheepy proportions. They’ll break out cameras and cell phones and snap pictures for an hour, rarely worried about whether they move so much as an inch in that time. Fall, however, means most of the morning traffic are cars headed for work in Durango. “We try to help the cars through and not hold up anyone too long, but it does slow down the daily commute,” J. Paul says.

Along with Luke and a crew of Navajo sheepherders, the group walks the center of the road, pushing sheep to the sides to as cars inch their way through the middle. It’s a tedious job that requires a lot of back and forth as traffic piles up on either side of the flock.

“I tell people this is how I keep my girlish figure,” J. Paul says with a laugh.

Kids reach out open windows in an effort to touch the sheep as they go by. Some drivers lay on the horn thinking it’ll help clear the path in front of them. Crew members work in front and behind the wooly mass to slow oncoming traffic.

“We have a lamb run over every once in a while, but most people are careful on their way through the flock. Nobody wants to hit a lamb,” J. Paul says.
What started as a rainy morning turns to just overcast skies around mid-morning – perfect weather for moving sheep. The only fly in the ointment comes during lunch as Geri Lasater interrupts to point out a lone ewe lamb she’s seen a few miles back. Apparently, she was separated from the flock during Thursday’s journey and never even made it to where the rest of the flock spent the night. Half the crew loads up and heads out to round up the stray.

Leaving the flock to collect the lost one is a principal as old as sheepherding itself. Soon, the wayward lamb is returned to the group and everyone is ready to cover the final miles into town. More heavy rain ensues, but the sheep and the crew have no choice to keep moving.