Keith and Kathy Stumbo provide a cautionary tale about the addictive power of the sheep industry. Their story began with nine sheep in 1980. Three years later their acreage in Honeoye, N.Y., was home to a flock of 150.

What began as a small Dorset flock to provide their daughters, Beth and Deanna, with the opportunity to show sheep turned into a flock that included five different breeds: Columbias, Dorsets, Oxfords, Shropshires and Southdowns. The family quickly outgrew the one existing barn on the land they purchased in 1973. Two additional barns have since been added to the property. 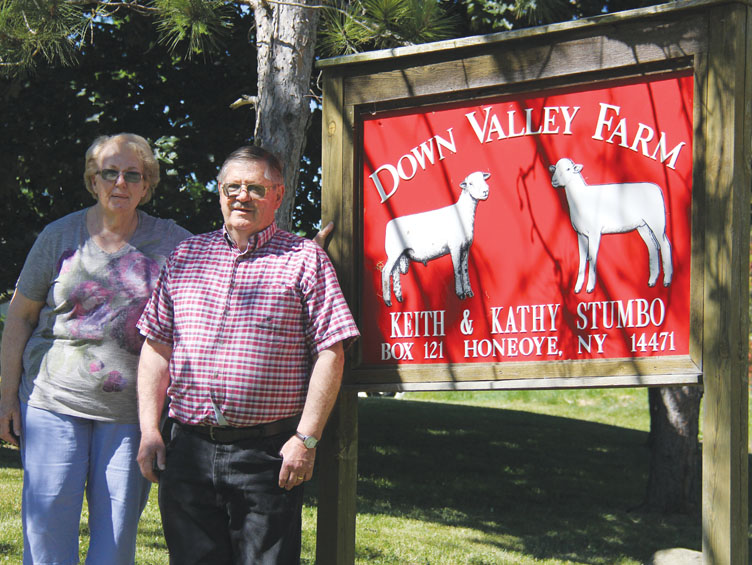 “We found that two girls showing against each other with the same breed wasn’t a very good idea,” Keith admits. “The first year they fought over the cute, little lamb. Then they found out that the big, ugly one is the one that usually wins, and they fought over that one. We decided it wasn’t going to work, so we got into a second (and third, fourth and fifth) breed.”

The kids are grown and out on their own now, but most of Keith and Kathy’s seven grandchildren have found their way into showing sheep at some point. Beth’s family lives just a mile away, and shows up on a daily basis to help with chores.

“He’s 75 now and I’m 70, so it’s getting hard for two old people like us to do it all,” says Kathy, who dealt with the children and the sheep for a lot of years as Keith worked off the farm as an international sales manager. He traveled to as many as 60 countries in one year, but usually made it home to help with the family’s weekend show schedule. Having shown sheep as a kid himself, Keith was the only experienced shepherd in the family when the sheep first found their way to Down Valley Farm.

“I had sheep until about the first year Kathy and I were married, and then we got rid of them and moved to the lake,” he recalls. “When the kids got to be 8 or 9, we took them to the county fair and showed them around the sheep barn. Immediately, they wanted to get into sheep.”

A regular on area boards of directors (school board, livestock boards, etc.), Keith did the only thing he knew how to do when the family got back into raising sheep: he got involved. It wasn’t long before he found himself being named as president for the Empire Sheep Producers Association – ASI’s affiliate in New York state. He’s attended a dozen ASI Annual Conventions since that time, and served on both the Wool Council and the Lamb Council. He also just finished a stint on the ASI Executive Board, but term limits prohibited him from running once again to represent Region 1.

“You really need a couple of years of going to the convention just to figure out what the heck is going on,” he said. “I’ve really enjoyed my time with ASI. Working on the Wool Council was a lot of fun, but I’ve enjoyed every thing I’ve done with ASI and the sheep industry.”

The New Yorkers figure on retiring completely from the sheep industry in the next five to 10 years. Before then, however, they’d like to see a renewed interest in raising sheep in their part of the country.

“There are lots of farms in southern New York that have just gone to the weeds,” Keith says. “People couldn’t afford to pay the taxes and farm on them, so they were bought up by people from the city for weekend getaways and deer hunting. The state would like to get a lot of that land back into production, and the answer is sheep. With sheep, you can have 50 head and they pay for themselves.”

Thanks to Keith and Kathy for their years of service to the industry.