Clint Hahn made the most out of his trip to Rapid City, S.D., winning the professional shearing division at the National Sheep Shearing and Wool Handling Contest, and picking up a win in the all-new sheep teepeeing contest that was held as part of All-American Sheep Day at the 2017 Black Hills Stock Show and Rodeo on Feb. 2 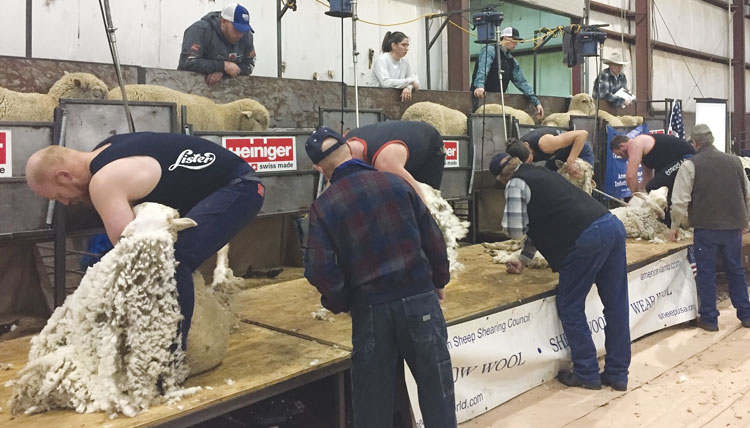 “I’ve been slowly working my way up for a lot of years,” said Hahn, who finished third a year ago and in the top 10 in 2015. He’s also won the competition’s beginner and intermediate classes in the past.

A graduate of the North Dakota Sheep Shearing School in Hettinger, Hahn has been shearing sheep for less than a decade. He worked full time in the industry for seven or eight years before heading back to the ranch his dad works on in Hammond, Mont.

“My dad’s worked there for 30 years, and they’ve been great about letting me go off and shear and compete in competitions,” he said. “I do enjoy the competitions. I like putting on a show for the people. In some ways, it’s easier than a regular day of shearing, but the mental stress of it all is almost more work. It’s the only place I go all year where I have to pay someone to let me shear sheep.”

Shearers at the competition are judged on time, as well as the quality of their shearing job. The professional division began with 12 contestants, was cut to eight for the semifinals and cut again to four in the finals. Finalists had to shear seven sheep in the championship round. Hahn took first and was followed by: Mike Hagens, Peter DeMooy, Shaun Fajnor, Pauline Bolay, Kevin Hickman, Emily Chamelin and Weston Hyllstead.

Fajnor was first in blade shearing and Terrance Pelle grabbed top honors in the wool handling portion of the competition.

A week later, the World Shearing and Wool Handling Championships wrapped up in Southland, New Zealand. In machine shearing, Alex Moser placed 24th and Loren Opstedahl was 37th for the United States. Brimmer finished 16th and Maggie Passino was 26th in wool handling, while Kevin Ford took 13th in blade shearing and Opstedahl was three spots behind him in the category.