The 2017 ASI Annual Convention wrapped up on Saturday, Jan. 28, with the election of New Mexico sheep producer Mike Corn as the organization’s new president. Benny Cox (Texas) was voted to serve as vice president and Susan Shultz (Ohio) will serve as secretary/treasurer.

Corn’s son, Bronson, nominated his father for the top position by saying, “My dad has worked his entire life for the betterment of this industry and I know that he will do a great job as your president.” 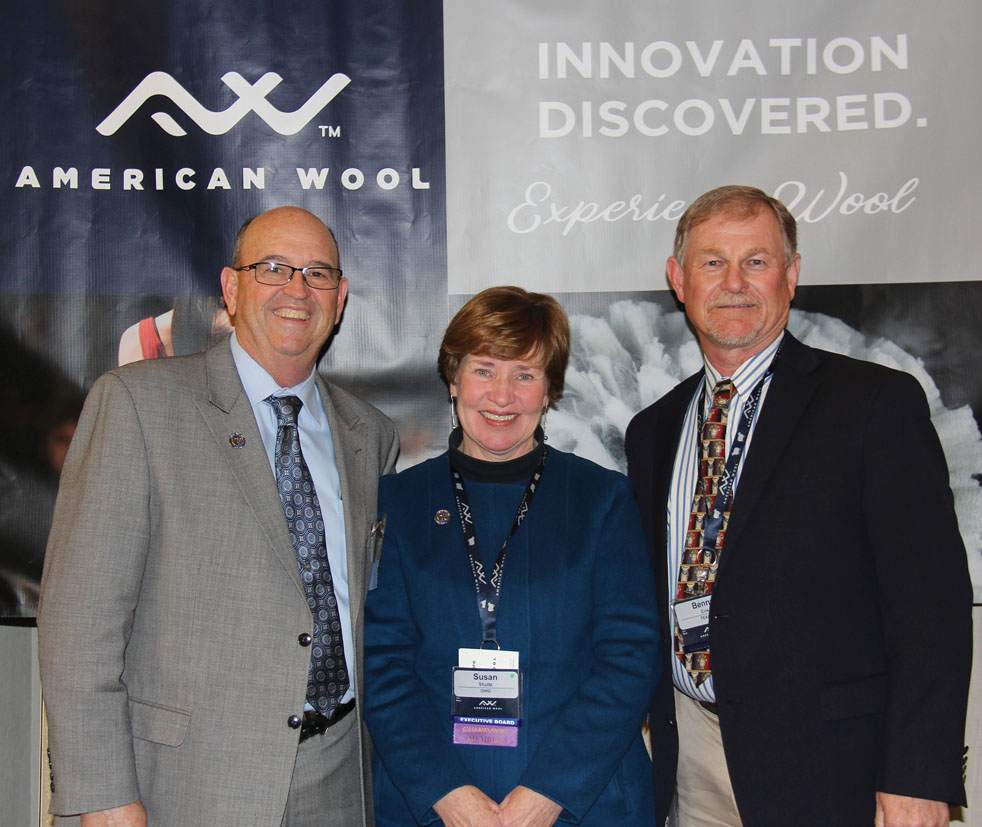 Corn said he is humbled to lead the organization and that “It is an honor to be selected to lead the industry that my family has worked in for four generations. We have a great opportunity in the coming year to make some changes for this industry. I feel that there are positive things ahead for us and we have a great executive team in place that is up to the challenge.”

The Corn family has been raising sheep in the Roswell area since the 1880s. He owns and operates his own ranch and raises white-faced, fine-wool sheep, mainly a merino cross. Corn is also the majority owner of the Roswell Wool Warehouse.

In addition to his own flock of hair sheep, Cox has worked at Producers Livestock Company, the largest sheep auction in the nation, for more than 35 years. Today, he continues his role as the sheep and goat sales manager.

With her husband, Bill, and son, Joe, Shultz operates Bunker Hill Farm, a fourth-generation diversified family farm. They breed black-faced (Suffolk) terminal sires primarily for the western range commercial industry and are committed to genetic improvement through the use of objective measurements and the National Sheep Improvement Program.

“I have a deep appreciation for the wide diversity in our American sheep industry,” said Shultz to the ASI board of directors. “From north to south and east to west we have variety in the size and scope of our operations, our production systems and even our marketing goals. I will do my best to represent this diversity by listening to your needs and acting to address those concerns.”

Region I: It’s not the first time Kniffen has answered the call to represent producers in the Northeast. He has represented the Garden State at the ASI Annual Convention since 1992.

Region II: “Being elected to this board is an honor and I very much appreciate the confidence the members of this region have placed in me,” said Parker. “I look forward to learning more about the industry as a whole so that I can more effectively assist in its growth.”

Parker grew up on the Appalachian foothill farm where he and his family now run their small flock of wool ewes. The lambs he finishes are sold through local farmer’s markets and to the ethnic trade. He also sells a few purebred rams to area producers to help increase weight gains in their hair-sheep operations.

Region III: Dvorak has been involved with sheep throughout much of his lifetime, raising mainly Dorsets and Hampshires. Besides sheep, he grows 100 acres of commercial alfalfa and runs a custom bailing operation established on the farm he grew up on.

“I am very humbled by the support I received from the states within this region and will do my best to represent them,” said Dvorak. “It is my desire to work to maintain the positive direction of the sheep industry. It is up to us to keep this momentum moving forward.”

Region IV: Ebert has been raising sheep throughout his life and bred his first champion lamb in 1962. His ewe flock is mostly registered sheep of four different breeds. His family sells commercial rams and club lambs and has sold sheep into more than 30 states and three foreign countries.

Region V: Third-generation rancher Buchholz runs livestock on ranches in several central and southwestern counties in Texas. Raising and selling livestock protection dogs is also a part of his operation.

Region VI: “I’m just an old sheepherder who appreciates the opportunity to serve the industry,” said Osguthorpe. “The people in agriculture, especially in the sheep business, are the salt of the earth and they are the people that I want to be associated with. The bottom line for me is that I want to do everything I can to support the industry. I want to pass a legacy along to my family, to the sheep industry and to agriculture in general.”

As a second-generation sheep rancher, Osguthorpe has always had sheep. His bands of sheep graze in the Park City area in the summer and winter in the west desert of Utah. Being a range operation, all of the lambing is done on the range. He owns a feedlot and farm land in the Delta region and utilizes H-2A workers to graze his flock on private land, as well as on year-round BLM and Forest Service allotments. He also grows alfalfa, oats, corn, corn silage and barley.

Region VII: Wixom got his start in the sheep business just as he was graduating with a degree in animal science from Brigham Young University. He used what money he had to buy 60 old ewes at $20 apiece. Today he runs multiple bands of ewes. He also grows alfalfa and other crops.

Region VIII: Anderson’s mantra for his operation and for the sheep industry in general is sustainability. He is a fourth-generation sheep man who, with his family, raises ewes and feeder lambs, operates a processing facility and grows grass seed along with other crops in the Willamette Valley.

“I am excited about the prospects for this industry and get up every day wondering which opportunity is going to become available to us on this day,” said Anderson. “I see American lamb as a growing market and a sustainable income for sheep families today and into the future. I feel that anyone who wants to be in the sheep business today has great opportunity. We are a really great part of agriculture today.”

Lamb Feeders: Schreier has raised feeder lambs for 31 years, beginning with 500 head and feeding as many as 5,000 in a year. As with any feeder animal, weight gain is the goal. The 100-day timeframe from arrival to finished weight of 145 pounds fits with Schreier’s farm operation. As the spring and fall field work becomes busier, the lambs are placed on self-feeders.