Award recipients at the 2017 American Sheep Industry Association’s Annual Convention have provided timely leadership, valuable expertise, key research and precious ink in support of the sheep industry through the years.

Always a highlight at the convention, the Awards Luncheon provided attendees with the chance to honor several men who put their own special skill sets to use in an effort to move the industry forward. Among them was: McClure Silver Ram Award winner Bob Benson of Indiana; Distinguished Producer honoree Lee Jarvis of Utah; Camptender Award recipient David Notter, Ph.D., of Virginia; and Shepherd’s Voice Award winner Robert S. “Bobby” Frank of Texas.

The McClure Silver Ram Award is dedicated to volunteer commitment and service, and is presented to a sheep producer who has made substantial contributions to the industry. Benson has served on the association’s executive board, as well as the legislative council, predator management committee, bylaws committee and nominating committee. He is a regular participant on ASI’s Spring Legislative Trip to Washington, D.C.

“I accept the McClure Silver Ram Award knowing that I’m here because of all of you,” Benson said. “I’m honored and humbled to be a recipient of this award. I’m truly blessed to be associated with so many dedicated, hard-working people.

A previous recipient of the 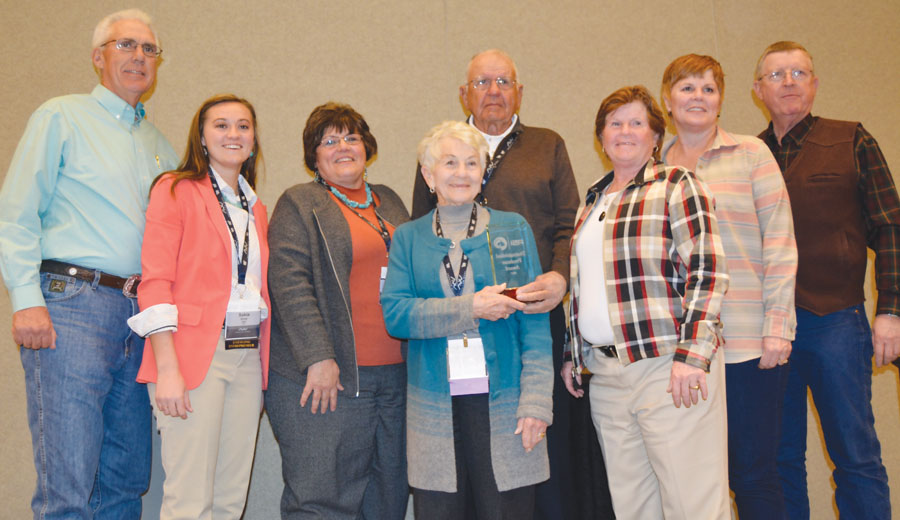 McClure Silver Ram Award, Jarvis knows a thing or two about serving the industry. With more than 60 years in the sheep business, he was a logical recipient of the Distinguished Producer Award. He started with no land and no sheep, but built the business while working a full-time night job at a local pipe plant. Along the way, he continued to purchase land and sheep.

“I’m a first-generation sheep man, but it’s been my life,” he said. “I’d like to thank my family and my customers.”
Jarvis left luncheon attendees with some useful advice.

“When Matt decided to stay on (at the family ranch), I told him two things I didn’t ever want him to do: don’t ever lie to a customer and don’t ever lie to your banker. Whatever you’re going to do, do it. I think that’s good advice for all of us.”

The Camptender Award recognizes industry contributions from a professional in a position or field related to sheep production. It’s difficult to imagine the advances made in the field of sheep genetics without the contributions of Notter of Virginia Tech University. From his involvement with both the National Sheep Improvement Program to his research through the U.S. Sheep Experiment Station, Notter has contributed to the science of sheep more than anyone in recent memory.

“I want to thank you all,” he said. “To someone in the academic environment, nothing is more meaningful than recognition from the livestock industry. You are the people who do the work and make the impact. Recognition like this makes you think maybe you’ve done something right over the years.”

As publisher of Livestock Weekly in San Angelo, Texas, Frank supports the livestock industry with each weekly issue of the newspaper his father first started in 1949. Also a sheep producer, Frank understands the concerns of ranchers across the West and has been an adamant supporter of the sheep and wool industry. The Shepherd’s Voice Award for media recognizes his contributions (as well as those of the newspaper’s staff) to the industry.

In addition to the awards, the ASI Executive Board presented the association’s executive director, Peter Orwick, with a Tribute to the American Sheepman engraved rifle in honor of his 25 years of service to ASI. He started with the association in 1992 and was elevated to his current role in 1997.

Apart from the ASI awards, the National Sheep Improvement Center honored Joan Snyder for her work on the center’s board, and the National Lamb Feeders Association posthumously honored Milt Ward for his service.