Convention: American Wool…Branded for the Future

American Wool…Branded for the Future

Temple Grandin, Ph.D., Colorado State University, kicked off the festivities at of one of the largest ASI Annual Conventions in the last decade in her trademark way…by mesmerizing the audience with her concrete thinking. 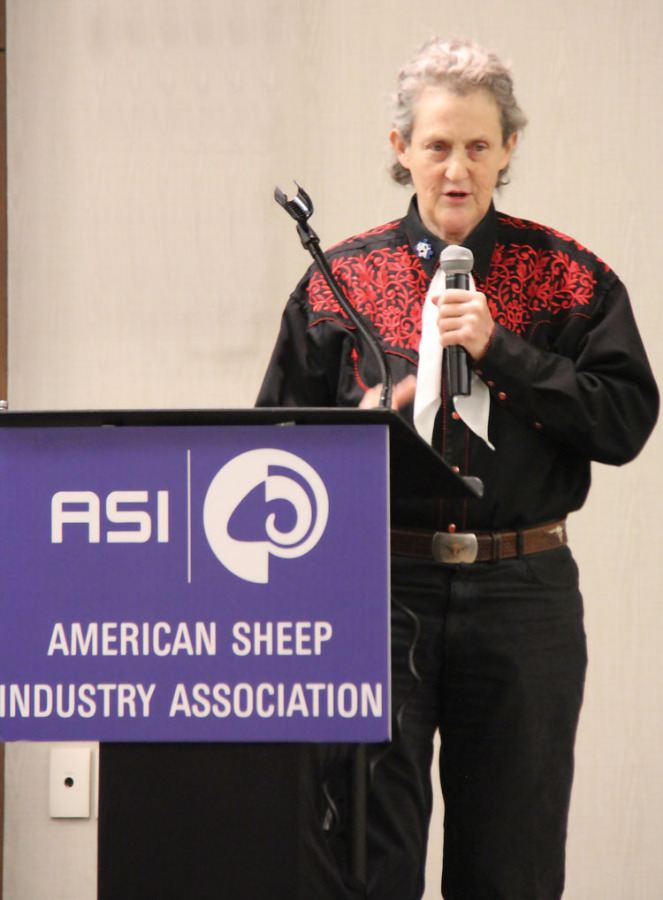 It is impossible for anyone – students, educators, industry leaders or politicians – to understand agriculture and the way it operates without spending time in the field. Nebulous policies and vague guidelines won’t work when you’re standing in the pasture trying to understand the needs of your flock. And they certainly won’t help sell your product to a suspicious consumer, Grandin shared.

“I found that with some things like sustainability, it’s easier to define what it’s not,” Grandin said. “Would you take your sheep out and just strip a pasture? We wouldn’t do that now, but I’ve seen it done. That’s obviously not sustainable.”

Throughout her presentation, Grandin stressed the need to deal in tangible terms and concepts. Just as she continually urged students to get out into the fields they choose to study, she stressed the importance of producers dealing with complicated topics in real-world scenarios.

“We have to remember that every phone is a TV station,” continued Grandin. “Social media magnifies the voices of the far right and far left. The only way to counter such extremes is for those in the middle to make their voices heard. Social media can provide new avenues for building credibility with consumers.”

The last time ASI held its annual meeting in Denver was in 2000.

“If the turnout was any indication, membership was ready to return to the Rocky Mountains. Registration numbers once again topped those of all gatherings but one since the last Denver event,” stated ASI Executive Director Peter Orwick.

As the industry celebrated the release of the newly created American Wool logo recognizing the versatility of American wool, textile-industry representatives also took center-stage to share their stories about programs supporting homegrown wool, innovative products and sustainability. The messages reinforced the concept that American wool is being used for the most comfortable socks imaginable, outdoor apparel capable of standing up to the toughest conditions and is an all-natural product that can be worn next to the skin.

Another textile representative, John Fernsell, Twizel Goods, stated, “Our mission is nothing short of changing the way clothes are made, from the fiber to your front door. Every Twizel item must forge a path to a better tomorrow, starting with sustainable materials and the best intentions.”

Meg Oeller, DVM, Ph.D., Office of Minor Use and Minor Species Animal Drug Development, FDA Center for Veterinary Medicine, discussed two efforts in this area in her presentation to the Board of Directors. “These endeavors involve increasing veterinary oversight of antibiotics that are considered ‘medically important’ in human medicine and removing approved label claims for use of these drugs for low-dose long-term production uses, such as to increase weight gain or feed efficiency.”

To this end, at FDA’s request, the drug sponsors voluntarily changed the marketing status of these particular antibiotics from over-the-counter to prescription or veterinary feed directive status. These label changes now require veterinary oversight in the therapeutic use of these products.”

“This process is clear for drugs approved for use in sheep,” said Oeller. “Extra-label use (using the drug in sheep when it is approved for other mammalian species) is legal for water medications, following a veterinarian’s order. Extra-label use is not legal for medicated feeds. However, FDA “will not recommend or initiate enforcement action” for medicated feed use in minor species (including sheep) provided certain considerations are met. This discretion will now include VFD feeds. The producer, the veterinarian and the feed mill should consult the Compliance Policy Guide and should abide by its considerations to use these feeds.”

Oeller also provided a short update on the work of the Minor Use Animal Drug Program – a USDA program known as NRSP-7 in partnership with FDA and university researchers. This program conducts research to support new animal drug approvals of needed drugs for use in minor species of agricultural importance. This program has been responsible for approvals for sheep in the past and has projects in progress.

It was considered another productive year for the Young Entrepreneurs program with a record number of active participants. From a hands-on wool classing session and competition to presentations on crossbreeding, social networking, generational family transition and much more, the group stayed engaged throughout.

“The sheep industry has shown a united front with the gathering of all of the national organizations under one umbrella in Denver,” said newly elected ASI President Mike Corn. “This meeting set the direction of the industry for the next year and I look forward to working with each of the volunteer leaders to accomplish these goals.”