From the backside of her handpiece, Emily Chamelin Hickman enjoys an up-close view of the industry on a daily basis. She’s partial to her home state of Maryland, but has traveled all across the United States while shearing sheep. She’s represented her country in international shearing competitions in Ireland and New Zealand, and married a fellow shearer (Kevin Hickman). Through it all, she’s developed her own theories on ways to improve the industry. 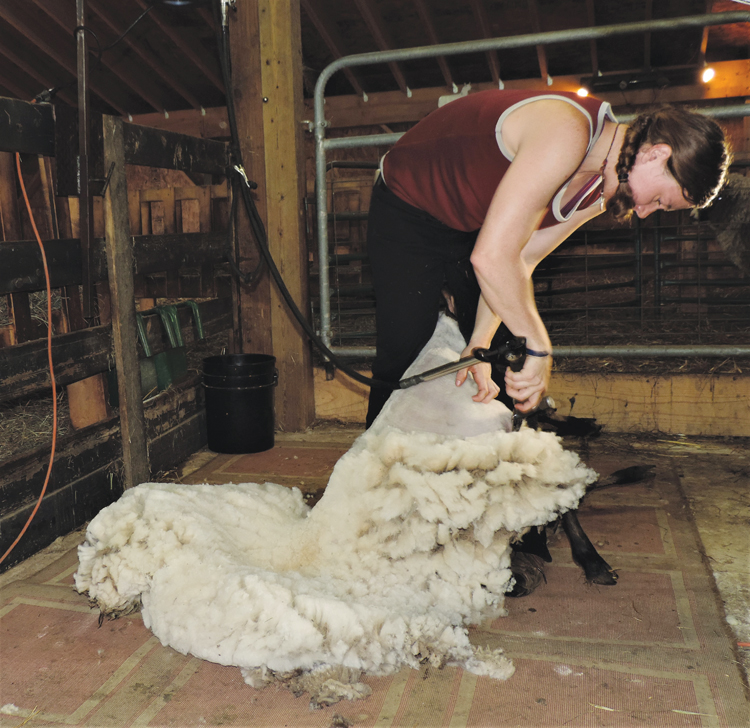 Sheep were my teenage rebellion. I’d grown up on a dairy farm and my mom had goats. But I wanted sheep. It was a classic Maryland setup with my three or four pet sheep for several years. I was 14 the first time I tried to shear my own sheep. It didn’t work very well. I was told I wasn’t old enough to take a class until I was 16. After that, people started asking if I could shear their sheep and I said sure.

It was a perfect way for me to get started, just shearing small flocks from people around the state. I sheared all through high school, did one semester of college and then headed to Alaska for a while. I ended up coming home to shear my regulars. For a while, I worked with the U.S. Department of Agriculture. By the time I was 23 or 24, I sat down and ran the numbers and figured out that I could make as much shearing as I could with my other job. I just needed to get my name out there a little more and I could make a living with shearing.

My parents sold the farm when I was a senior in high school and moved to a smaller property, but my mom is one of those people who just has to have animals around. So, I buy sheep and she takes care of them when I’m off shearing. We have 15 sheep and 10 goats. Right now, I’m home about half the year and gone about half the year, so it’s great that she’s there to take care of things.

I met Kevin at a shearing contest. He was in charge of the trailer. I got to know a bunch of those guys through the contests and started hanging out with them. Kevin and I have been together for five years, and we’ve been married two-and-a-half years. We don’t see each other hardly at all in the spring. Even if we were together then, we’re both super busy that time of year. We’d barely see each other anyway.

The long-term goal is to shift back toward Maryland. We need a clientele that can support us both. There’s a lot of sheep in Maryland, they are just more spread out and come in smaller batches than what we get used to out west. In some ways, that’s easier on the body because you get some breaks when you aren’t just shearing 200 sheep in one spot in a day. That’s a big selling point for us right now because we aren’t getting any younger. We’ve reached an age now where we have to be smart about taking care of our bodies.
I bought 30 acres in Maryland in 2016, so more sheep is always in the back of my mind. I’d love to expand the flock to 50 or 60, but we have to do it in a way that makes sense. When you have smaller numbers like we do in the east, every sheep counts. Sheep are such a passion of mine. That’s one reason I love shearing so much. I get to go to all these great farms and ranches and see how people are raising their sheep.

On-farm consulting and education is something I’d love to do more of with producers. It’s such a great feeling when I can help people with a problem they might have. Kevin says I talk too much, but I’ve been to so many sheep farms and been able to see the way they do things in different parts of the country. Sometimes I can offer advice because of that. Education is such an important part of this industry, especially when we’re dealing with people who have come into sheep with limited agricultural backgrounds. Trying to organize people in the industry is a long-term goal of mine.

I see all sides of the industry while shearing. I hear people talking and sharing their opinions. While shearing, all I have is time to think about what they are saying. I can’t help it. I’ve worked a lot with the Maryland Sheep Breeders Association, and I think they do a great job helping the small producers with their needs. That’s mostly what we have in Maryland, is small producers and small flocks. But I’d like to see us develop to a point where we can help larger producers be successful in the state, as well.

Lydia, my daughter, is 10 years old and she travels with us and is homeschooled. It’s great because she has friends all around the country. At this point, she knows how we do things, so it’s funny to watch her directing people as we get set up. It’s also a challenge because she’s more of an artist, and Kevin and I are both A-type personalities. But we’ve made it work for our family.

Things keep shifting for us. We never know exactly where we’re going to be in a week or a month sometimes. Right now, I love it, but I can see it reaching a point where it gets old. Until then, we get to meet great people and see a lot of the country. I just love going to places with good sheep.