Army researchers who are developing a wool-based fabric blend are aiming to improve combat uniforms while boosting U.S. manufacturing jobs.

The Army has developed a fabric composed of 50 percent wool, 42 percent Nomex, 5 percent Kevlar and 3 percent P140 antistatic fiber. One goal of textile R&D underway is to create a flame-resistant combat uniform made wholly from domestic materials, said Carole Winterhalter, a textile technologist with the Army Natick Soldier Research, Development and Engineering Center. 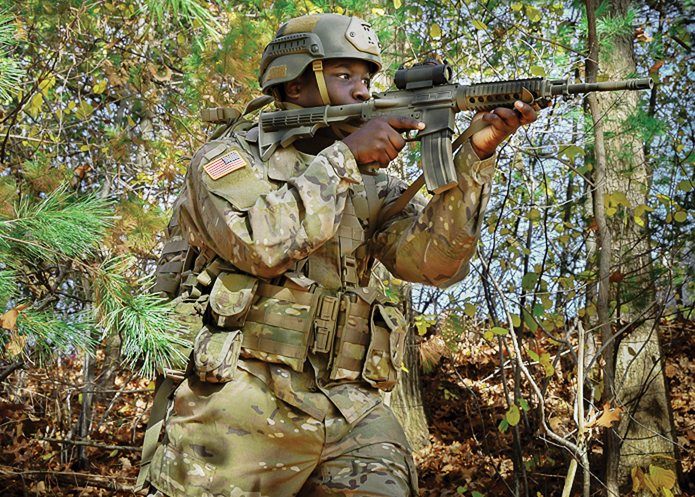 This research may provide an opportunity to meet this objective.

“We have a lightweight fabric that is inherently flame resistant. No topical treatments are added to provide FR,” Winterhalter said. “We are introducing a very environmentally friendly and sustainable fiber to the combat uniform system.

“We don’t have other wool-based fabrics in the system right now. This is a brand new material.”

Three Army researchers traveled to Germany from Aug. 26 to Sept. 15 for Exercise Combined Resolve VII to work with about 100 soldiers in testing and evaluating prototype uniforms composed of this fabric. The scientists joined John Riedener, the Field Assistance in Science and Technology Advisor assigned to 7th Army Training Command. The exercise brings about 3,500 participants from NATO allies to the region.

“We were in the heat of summer here, and it was very warm during the exercise. The uniforms were lighter weight and breathed better. Soldiers were very happy with the material,” Riedener said.

FAST advisors are a component of the U.S. Army Research, Development and Engineering Command.

Soldiers wore each of the three uniforms for about seven days in a field environment for a total of 21 days. The testing and survey instructions asked soldiers not to compare the prototypes with existing uniforms or camouflage patterns. Participating soldiers came from multiple military occupational specialties.

Initial results suggest the majority of the soldiers liked the fabric because it was lightweight and breathable; however, analysis of the survey data is not complete, said Shalli Sherman, NSRDEC program manager for the Office of Synchronization and Integration.

Winterhalter is optimistic about the prospect of a wool blend being incorporated into combat uniforms because of its environmental, manufacturing and economic benefits. She said the United States has about 80,000 wool growers, and the Army would like to include this material in the clothing system.

“Wool is 100 percent biodegradable. It’s easy to dye and absorbs moisture,” said Winterhalter, who is also the federal government’s chief technology officer for the Advanced Functional Fabrics of America Manufacturing Innovation Institute. “The Army has spent quite a bit of time and money to reintroduce a manufacturing process in this country called Super Wash that allows us to shrink-resist treat the wool. It’s been very successful.

“When blended with other fibers, the fabric does not shrink excessively when washed. The Super Wash line at Chargeurs in Jamestown, S.C., has exceeded its business estimates. It has revitalized wool manufacturing in this country. Something we initiated for the Army has resulted in economic benefits and new jobs for U.S. citizens.”