Wool in the Military

From the Revolutionary War to present day, wool has been an important part of U.S. military uniforms.

These days, we find that every soldier, sailor, airmen, marine and coast guardsman leaves basic military training with a full complement of wool and wool-based uniform items.
Indeed, the U.S. military continues to consume upwards of 20 percent of the American wool clip for uniforms each year – making it the single largest consumer of American wool. The Berry Amendment requires that all U.S. military uniforms be made from 100 percent domestic products, protecting our wool from offshore competition. 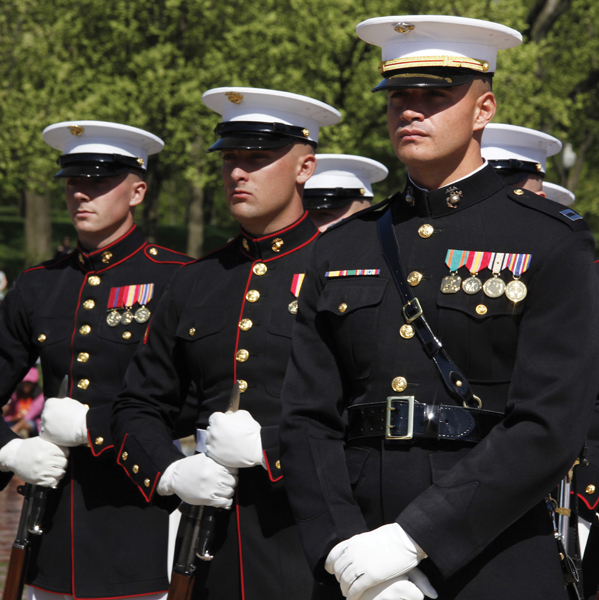 While wool was one of just a few choices for such uniforms as the country fought for its independence, it has proven itself a worthwhile fabric for more than 200 years in the U.S. military.

Revolutionary War uniform styles and colors varied widely depending on a soldier’s location with wool being the preferred performance fiber for the fabric. At the beginning of the war, most soldiers ‘came as they were,’ wearing work clothing, also made of wool. When uniforms became common, brown was the color of choice since it was the easiest color to dye.

As the war progressed, brown was replaced by the classic red and blue combination. Regardless of style or color, wool fiber was predominant in the uniform fabrics of choice throughout the country.

In 2017, the Department of Defense forecasts that it will contract for 60 different items containing wool to satisfy its needs for military dress uniforms, including:

• Pea coats. DOD forecasts that it will buy 50,000 U.S. Navy pea coats in 2017. Each coat requires more than three pounds of clean grade 64 or finer wool to manufacture. This classic style dates back to the 1800s, when it was invented by the Dutch. The British adopted the design and made the coat popular in their navy by the mid-19th century. The U.S. Navy, in turn, selected the pea coat for its sailors. Early pea coats were constructed of heavy weight melton wool woven tightly, resulting in a fabric that is very warm, as well as water and wind-resistant and perfect for life at sea.
The functionality of the peacoat in today’s U.S. Navy remains relatively unchanged, continuing to use heavy weight melton fabric made from wool. It is still the outerwear choice for at-sea wear. In addition, the pea coat has transitioned to civilian life, finding its way into both men’s and women’s winter wardrobes.

• Wool Berets. The black wool military style beret is the current head gear for all Army soldiers when in dress uniform. While the black beret is bought in by far the largest quantity, it is not the only color used by the U.S. military. The Army also uses maroon, tan and green berets to identify airborne soldiers, rangers and special forces.

• U.S. Navy jumper and broadfall trousers. Nicknamed cracker jacks after the popular popcorn snack, this uniform combination is issued to all U.S. Navy recruits. It is the dress uniform for junior enlisted personnel. The trousers are unique in that they are designed with a ‘broadfall’ front instead of a conventional zipper fly. The broadfall is closed by 13 buttons, seven across the top with three on either side. An old sailor tale says the 13 buttons are to commemorate the original states of the union. The reality is that the 13 button arrangement is a result of the symmetry of the three buttons on either side.

These uniforms, like the pea coat, are no lightweights. Both garments use 16-ounce wool fabrics. Each uniform set weighs an average of five pounds. In 2017, the Navy plans to buy more than 115,000 jumpers and 50,000 pairs of the broadfall trousers. The cracker jacks use wool that is no coarser than grade 62.

• USMC Dress Blues. The U.S. Marine Corps standup collar dress blues are regarded by many to be the best looking uniform worn by the U.S. military. Like it’s Navy counterparts, it has a long history and preference for wool. The dress blues have been the standard dress uniform of the USMC since the 1800s, with no major changes, making it the longest serving uniform combination in the U.S. military. This combination is also the only uniform worn by U.S. military personnel that incorporates red, white and blue into its design.
In the coming year, the Marines will buy more than 63,000 sets of these classic uniforms. The fabric used in these dress blues is 55 percent polyester and 45 percent grade 64 wool.

• U.S. Army dress uniform items. Due to its size, the U.S. Army uses more dress uniforms than any other service. The blue uniform actually dates back to the earliest days of the Army. However, by the Spanish-American War, it had been replaced by combinations of olive green or khaki/tan which lasted through World War II. The end of that war saw millions of soldiers returning to civilian life, with their wartime uniforms. Many continued to wear those uniforms and in some cases in less than flattering circumstance to the U.S. Army. As a result, the Army redesigned the dress uniform in 1954 and adopted Army Green as its color.

Between 1954 and 2015 – when the green uniform was retired – the Army reintroduced the blues, as well as a white uniform for ceremonial purposes. This gave the U.S. Army three dress uniforms. In an effort to simplify the Army dress uniform line up, Army Chief of Staff Peter Shoomaker announced in 2006 that the dress blues would return as the primary Army dress uniform and Army Green would be retired. The phase out of Army Green was completed in 2015.

The dress blues use two complementing blue shades of fabric for the coat and trousers made from a blend of 55 percent polyester and 45 percent grade 64 wool. The coat fabric is slightly heavier than that of the trousers for comfort. In 2017, the Army will buy approximately 300,000 pairs of trousers and 150,000 of the coats.

• The U.S. Navy and Marine Corps are the largest per capita users of wool in the U.S. military. In addition to the uniforms already mentioned, there are many other items containing wool used by both services. For example, the Navy and Marines will buy more than a half million linear yards of khaki polyester/wool fabric for manufacturing its khaki combinations, as well as another half million yards of USMC green for those uniforms.

• The U.S. Air Force will buy more than 700,000 yards of fabric this year, some of which will be used to manufacture 600,000 individual garments that make up the USAF dress blue uniform.

• In 2017, there are substantial wool and wool blend purchases that will be used by the military and security forces of Afghanistan. More than 350,000 sets of uniforms will be purchased by the government of Afghanistan, all of which use 64 grade wool in the fabric blends.

In total, the Department of Defense has forecast that it will contract for 60 different items containing (or made entirely of) wool in 2017. For the first time in several years, DOD is forecasting that it will buy more than 190,000 wool blankets for U.S. military use and another 57,000 for use by Afghanistan.

The Army blanket (some are actually Navy blankets) uses between 54 and 60 grade wool and averages four pounds in weight.

The United State has three major service academies at West Point (N.Y.), Annapolis (Md.) and Colorado Springs (Colo.). Each of these academies prefer wool fabrics for their cadet and midshipmen uniforms as it is the most durable and climate friendly for their locations. The total number of students at the service academies is approximately 12,000. While the overall population is small in comparison to the rest of the military, it is important to consider that the plebes, midshipman and cadets wear wool practically every day of their academy experience and will take their experiences with them as they assume leadership roles in the U.S. military.