Like a stubborn stain, the idea that wool is an allergen just won’t go away. 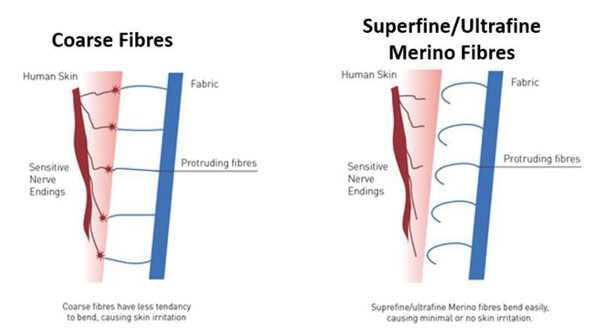 It is a common misconception that wool can cause an allergic reaction. Studies show that all fibers, not only wool, can provoke a prickle sensation on the skin if the fiber end is coarse enough. This prickle can be itchy and cause irritation, but it is not an allergy.

While fine fibers bend and brush against the skin, coarse fibers tend to be more rigid and can trigger nerve endings in the skin’s surface.

The wool fiber exists in many levels of fineness, which is measured in microns. Most of the wool in clothing has an average diameter between 11.5 and 24 microns. Wool 24 microns and courser is generally used in interior textiles or outer-layer clothing that is not in contact with the skin.

Far from being an allergen, recent research conducted by The Woolmark Company has demonstrated that wearing superfine wool garments against the skin is therapeutic in the treatment of eczema (atopic dermatitis).

Dr. Lynda Spelman of Queensland Institute of Dermatology says that participants in a study she conducted showed substantially reduced eczema symptoms when they wore superfine wool undergarments. None of the participants displayed an allergic or irritant reaction.

“We have seen substantial reductions in skin dryness, redness and itchiness and in the measured area of inflammation – and for a number of the patients, this is the first time a real solution to their condition has been presented,” Dr. Spelman said.

She says the results appear to relate partly to the unique moisture management properties of wool.

“Wool is a hygroscopic fiber, which has the ability to absorb up to 36 percent of its weight in water and create a thermal buffer between the skin and the external environment. The wool appears to be keeping the moisture content of the wearer’s delicate skin at the levels it should be, preventing it from becoming too dry and therefore reducing the risks of bacterial infection and the desire to scratch the itch.”

These findings are being documented and are due to be published in high-rating dermatological journals following peer review. Once published, The Woolmark Company and the International Wool Textile Organization – which ASI is a member of – will take this message to the wool supply chain and consumer markets around the world.

At a recent IWTO meeting in Biella, Italy, Woolmark Company Fiber Advocacy and Eco Credential Program Manager Angus Ireland described the progress being made in understanding wool’s effects on health and well being.

“The traditional advice to eczema sufferers to indiscriminately avoid wool against the skin, based on early commentaries that failed to distinguish between wool fiber types, can now be modified to include superfine Merino as a recommended next-to-skin clothing choice,” Ireland said. “It’s interesting to note that in the studies conducted, many patients believed they were allergic to wool. However, we didn’t have a single patient withdraw from the study due to any types of intolerance of these superfine wools.”

Notably, so-called allergic reactions to wool garments have decreased within the last 50 years, coinciding with reduced use of many products previously used in the finishing stage of textile production.

Recent headlines about the uniforms of American Airlines flight attendants scapegoated the wool in the fabric even though the manufacturer’s standard uniform comprises more polyester than wool, and testing by the flight attendants union found detectable levels of chemicals commonly found in pesticides, fungicides and fertilizers. It is rare for such chemicals to be used in modern-day wool clothing.

The union reported concerns that the foreign manufacturing of the foreign-produced fabric – not its fiber content – was the source of the problem. Even so, the focus came down to the old standby “wool allergy.”