You Never Know What Might Happen at a Sheep Meeting

My wife and I were married in a newspaper office – an office where she had worked for all of a week. The only people there were her coworkers that we barely knew. It makes for a great dinner party story. Mark and Mickey Sue Dennis have a similar story. 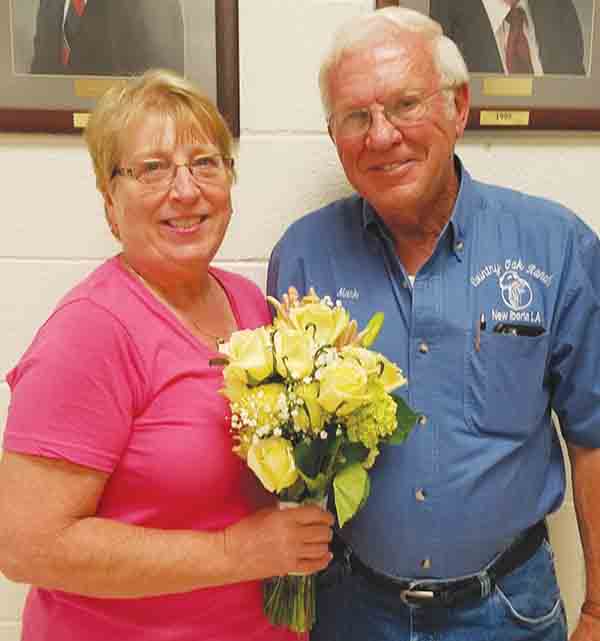 The couple married on Aug. 5 during the Katahdin Hair Sheep International annual meeting in Cookeville, Tenn. A 30-year member of the breed association, Mark couldn’t think of a better place to tie the knot.

“I have a lot of friends there, and what’s a better place to get married than with all your friends?” asked the 81-year-old Louisiana producer. A week of sheep meetings (the first stop was the South Central Katahdin meeting, then the annual KHSI Expo) served as a honeymoon of sorts for the couple. “When you’re an old guy like me and opportunities like this come along, you have to move fast.”

Before we give Mark too much credit, it should be noted that he didn’t move that fast. Mark and Mickey Sue lost their previous significant others within weeks of each other in January 2015. The two began to share the second pew in church. A few months down the road, he invited her to breakfast at the Waffle House.

“I was looking for a hot chick in her 70s who didn’t smoke, drink too much or need to take any pills,” Mark said as he took the floor at the end of the board meeting. He’d proposed privately last December, but made it official in front of the couple’s children and grandchildren on May 22.

“He even got down on one knee,” Mickey Sue recalls. “He surprised even me when he did that.”

To his credit, Mark didn’t even need help getting up after his traditional proposal. Mickey Sue said yes and the couple started considering dates. Something just seemed right about the KHSI Expo and meeting.

“That’s what he loves, so why not do it there,” said Mickey Sue, 61, who had never worked with livestock before meeting Mark. “There are just so many nice people in the association, and they made me feel so welcome.”

Once the board got wind of Mark’s plan, they even scrounged up a bouquet for Mickey Sue. Jody Winstead, a minister and one of Mark’s longtime customers, drove two hours out of his way to perform the ceremony. A traditional banquet following the meeting served as the couple’s wedding reception.

Congratulations to the happy couple, and may you have many wonderful years together back in New Iberia, La.