Genetic performance data translates into profits for producers, a fact that was evident at the annual Center of the Nation Sale in Spencer, Iowa, on July 22-23. Buyers and consignors from 17 states produced gross sales of $100,500. 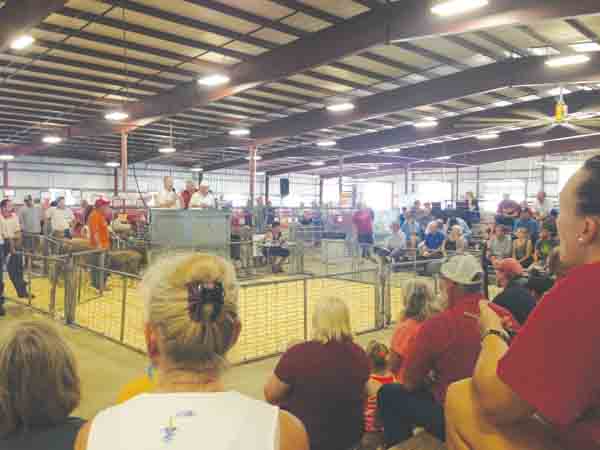 “It was a great sale,” said National Sheep Improvement Program Director Rusty Burgett. “We had the most consignors we’ve ever had. The demand for sheep with breeding values is certainly apparent.”

So apparent, NSIP is adding a second sale next year in Wooster, Ohio. “It will highlight different sheep from a different part of the country,” said Burgett, “and provide an additional chance for producers to buy quality sheep backed by sound data.”
In its 11th year, the sale appears to be a success.

“The best endorsement is the number of people in the bleachers every year,” said Dan Morrical, Iowa State University Extension Sheep Specialist. Despite a heat index of more than 105 degrees, there were still nearly 200 people in the bleachers along with another 175 watching the sale on DVAuction.com. “Both commercial and seedstock – they’re all happy with the sheep they’re buying. That means NSIP has done what it’s supposed to do.”

What it is supposed to do is increase performance. Selecting breeding stock using NSIP Estimated Breeding Values is catching on because producers see results.
Center of the Nation is only one of the country’s noted sales to highlight animals with EBVs. Others are quickly coming on board.

Data is no stranger to the Montana Ram Sale in Miles City, where genetic performance data is not required but is the norm.

“We were one of the first sales to publish breeding values into a catalogue,” said Whit Stewart, Ph.D., Montana Sheep Extension Specialist, “and it was well received. It still is. We get a lot of out-of-state and repeat buyers.”

Stewart said there is a genuine appreciation for the data, and it’s based on results. “Rams and ewes are doing what their EBVs say they can do. That’s the proof people need for selection.”

Lisa Surber, Ph.D., the Targhee representative on the NSIP board, has long been associated with the Miles City sale, and said nearly 90 percent of Rambouillet, Columbia and Targhee (the white-faced breeders) use the NSIP EBV data provided. The Suffolk and Hampshire buyers looking for black-face terminal sires focus on weight per day of age and rib eye information, mostly from on-farm performance test data. In one form or another, they rely on a quantitative expectation of performance to compete in a data-driven market.

“Rams that don’t have it don’t sell as well,” said Surber. “Even those who don’t use the numbers appreciate seedstock producers who do. They come to the sale expecting the best of the best, because they know the breeders are paying attention to the genetics.”

The Newell (S.D.) Ram Sale has been selling livestock for 71 years, originating as a cooperative effort between the Newell Community Club and a sheep experiment station.

“It has no policy on NSIP EBV data,” said Dave Ollila, Sheep Field Specialist for South Dakota, “but producers have adopted its use over the past four or five years. They want more data when they buy because they want to see a better return.”

The sale aims to bring in high quality genetics to serve the area’s commercial producers, and estimates put 15 percent more animals with numbers this year as compared to a year ago.

Ollila sees more interest in a data-based approach, with use of the Range Index and EBVs for economically important traits. “The data makes a good selection tool and a good marketing tool.”

Still, it seems progress is slow, especially compared to other forms of livestock. “The seedstock producers are making the commitment,” says Ollila. “Now we have to get the commercial producer to reward them for their efforts.”

Bill Shultz, of Bunker Hill Farm in DeGraff, Ohio, has been selling Suffolks with EBVs at the Utah Ram Sale for 12 years, where he’s been in a league of his own.

“Last year I was the only NSIP breeder there, but that’s going to change,” says Shultz. He senses a new perspective, and is finding more repeat customers who like the numbers. “They’re seeing success because of the EBV selections. They’re performing as expected. And slowly, the producers are becoming believers.”

For an experienced sheep breeder such as Shultz, a regular at Center of the Nation, working a sale like Utah requires patiently answering an onslaught of questions.

“People want to believe the numbers, but they’re asking, ‘Does that really mean what it says it means?’” he said. “They’re listening. And checking it out. Because NSIP has done a great job of raising awareness.”

“The (sheep industry) Roadmap says production efficiency has to be a priority for the sheep industry. That means we have to breed better, and we have to manage better,” said Morrical. “That justifies an educational component.”

The Center of the Nation Sale is known for its educational sessions, and others are following suit.

“Montana is a case study in how effective an extension program can be,” said Stewart. “They’ve worked very effectively for years to get the word out.”

This year’s sale builds on that effort, with sessions on quantitative genetics, the NSIP ram buyer’s guide, cross-breeding and hands-on workshops that teach producers what the data means and how to use it – even the right way to read the sale catalogue.

“There’s been a switch in selection method,” said Morrical. “Buyers used to look at phenotype, then see if the numbers backed up what they were seeing. Now it’s the other way around. They select for numbers, then see if they look right.”

That seems especially true for younger buyers who want proven genetics that will generate a profit. And they’re willing to pay. At Center of the Nation, the under 30 crowd were some of the sale’s more lucrative customers.

Surber also sees the youth influence at Miles City. “They’re into using all their tools, especially the information at their fingertips.”

And they’re looking ahead, buying ewes with strong maternal numbers and terminal rams with not only good growth, but muscle depth – in anticipation of a grid-based market.

“We’ve hit a point where we expect our sheep to do more,” said Morrical.

“This isn’t just about chasing numbers,” added Stewart. “Targeted selection based on genetic improvement is the future of this industry. Buying breeding stock with EBVs means producers can focus on the top needs in their flock, increasing productivity and profitability throughout the industry.”