Burton Pfliger, ASI President
In my recent conversations with ASI Executive Director Peter Orwick, as well as others within the sheep industry, the following topic was an integral part of the conversation.

Feeder lamb prices and sales were trending a bit lower in late September and early October, which I thought odd given a bounty of less expensive livestock feed is expected this fall. All we hear from grain country is record production from wheat to row crops, which should provide finishers of lambs an opportunity to recoup losses on many of the 2015 lamb crop.

I found several factors in research and conversations that might explain some of the weakness that I thought would be interesting to share. Analysts claim grocery store prices have now declined for nine months, making it the longest consistent downward trend since 1962. Meat, I understand, is a part of the equation for price decline, noting beef in particular. The actual commodity is a small share of the consumer price of many foods, so packaging and fuel expenses must also be cheaper for companies.

Another factor, USDA reports show a major increase in meat production citing U.S beef and pork at six to seven-year record-high production with an increase noted in poultry, as well. So, overall meat production in the United States is currently providing plenty of competition to sell against in the marketplace. 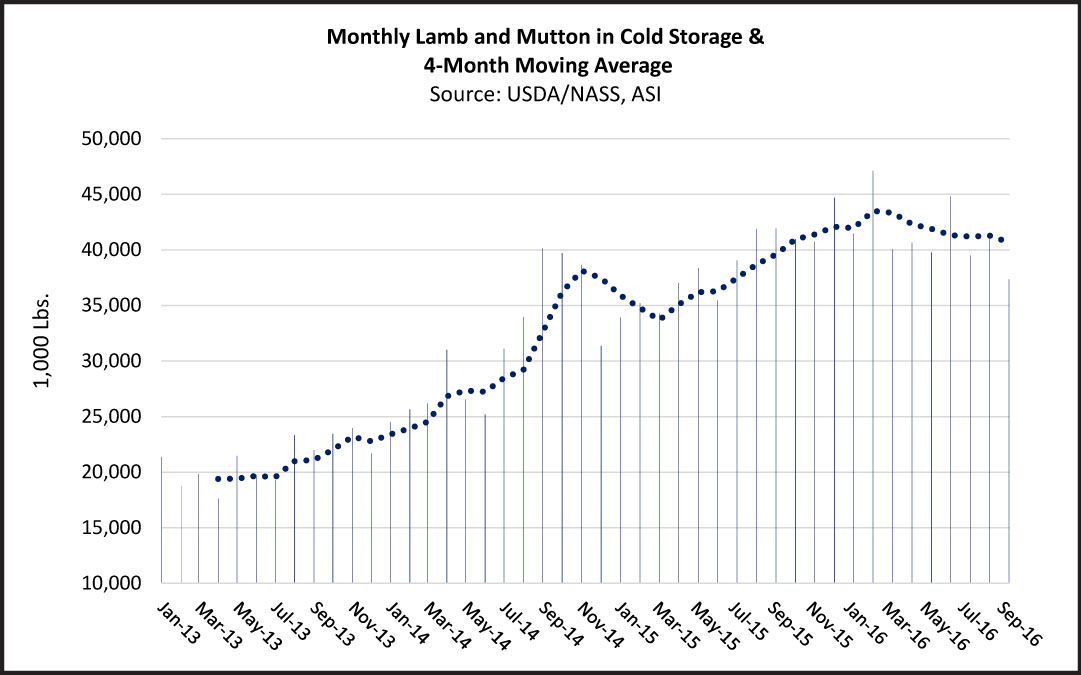 I share a chart from Dr. Julie Shiflett with Juniper Economic Consulting on cooler inventory that shows volume of lamb in 2016 often hitting monthly highs even against the record levels we witnessed in 2015. This increased stored product is likely a great share of imported product with the U.S. exchange rate still very favorable to Australia and New Zealand. Additionally, we have one less major buyer in the feeder-lamb market with the absence of JBS. Other feeders and buyers are taking those lambs, but perhaps having to leverage more capital to cover those purchases.

Two articles of October are worth mentioning on lamb imports to the United States. One university refers to the expected decrease of 3 percent of lamb production in New Zealand due to drought, and another suggests long term that England’s exit from the European Union could divert New Zealand lamb from their No. 1 market to the less prominent United States. Both sources are correct to look at the impact of less sheep production and changes in trade between England, Europe and the down under producers. However, I found a third article that suggests Australia will aggressively pursue increases in its quota of lamb to England and Europe, so that would likely decrease its product shipped to the United States.

Global issues increasingly continue to impact U.S. farmers and ranchers. Sheep producers have witnessed this in the wool market for 30 years, at least. Within the last 15 years, a larger more evident global influence has dramatically shifted prices up and down in the lamb meat business. Keep in mind that most U.S. lamb companies sell both domestic and imported lamb.

According to Meating Place, global food prices are at an 18-month high citing price increases for pork and sheep meat, as well as poultry with Asian demand a key driver. This is another reason American lamb access to Japan would be helpful, and a reason ASI leadership has been pressuring USDA to reopen closed markets with Japan since 2003.

All that said, ASI continues to work with USDA officials to publish the full range of price reports avaliable for lamb. It’s very disappointing that the sheep industry does not have available full reports in 2016, even with a willing Mountain States Rosen offering to make information available. One can’t deny all the additional information would contribute positively to an open and transparent market for producers, feeders and packers alike. ASI appreciates the company’s willingness to provide the data, and will keep the effort front and center with USDA to return to full reports sooner rather than later.

The big missing piece shut out by the lack of mandatory price reporting is the absence of LRP-Lamb insurance. It would be positive for every producer, feeder or processor to have the option of lamb-price insurance this fall to help provide the only risk management tool available for lamb prices against the challenging backdrop of the factors we are discussing today.

I strongly encourage readers to attend the national convention in January in Denver. Players in the lamb and wool business will be attending and no doubt this discussion will be thoroughly reviewed that week.