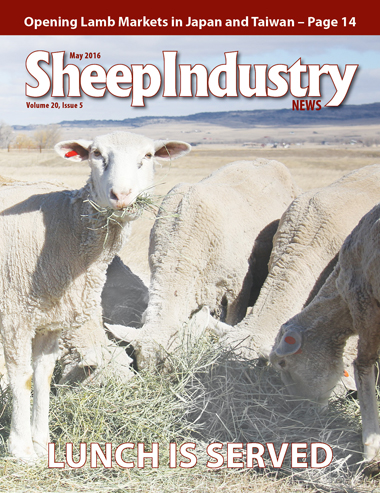 Demand was solid and wool in the pipeline from grower to consumer was dwindling. In early April, “buyers for China were dominant, with very good demand, buyers for Europe and India were also strong,” (WTiN Wool Market Report, 4/11/16).

AWEX explained that in early April, buyers displayed a strong preference for the 19-micron and broader range, especially the limited quantity around 22 and 23 microns (4/7/16). This bodes well for U.S. wool sales – in spite of the strong U.S. dollar. About one-third of the U.S. wool clip falls into this range.

ASI offers an app of Australian wool prices in which wool growers can use weekly imported prices to help value their wool. The app helps a grower more accurately estimate market price relative to preparation and quality of the wool. Knowing growers’ micron, yield, length and degree of wool preparation can help a grower assess his or her wool’s value – whether it falls closer to 100 percent of Australian wool price or 65 percent.

It is anticipated that 2016 will see lower international wool production, and thus tighter supplies, which can provide price support. However, longer-term, it is demand, not supply that we want to see drive prices higher. The “expectation is that prices for wool will remain high, but for the wrong reasons,” (WoolNews.net, 4/2016). We would like to see strong demand pull prices higher because only then do we see expanded – not declining – wool production.

Wool demand is largely a function of income. Higher income countries buy wool. China’s domestic wool consumption has grown in recent years, but has seen a slowdown as economic growth slows. However, Chinese wool exports continue to grow – a function of higher incomes internationally. It is this income growth globally that can support long-term wool prices.

Poimena Analysis reported the marketing focus should be on meeting consumer demand. Demand for business-wear for men will continue to be a mainstay for wool (Poimena Analysis, 1/2016). Furthermore, knitwear is a growth area, particularly with increased demand for active leisure wear and casual garments. Coats are the best performers in women’s wear for wool, while trade in other women’s wool clothing continues to fall. Women’s coats was the only sector of woolen apparel in U.S. imports that grew in 2015 (Poimena Analysis, 1/2016).