Use NSIP Data To Improve Lambing Rates in Your Flock

Heading into spring, there’s no doubt lambing is on the mind of every sheep producer.

“If you keep better records, you will produce a better product,” says Dale Thorne, of Thorne Farms near Hanover, Mich. 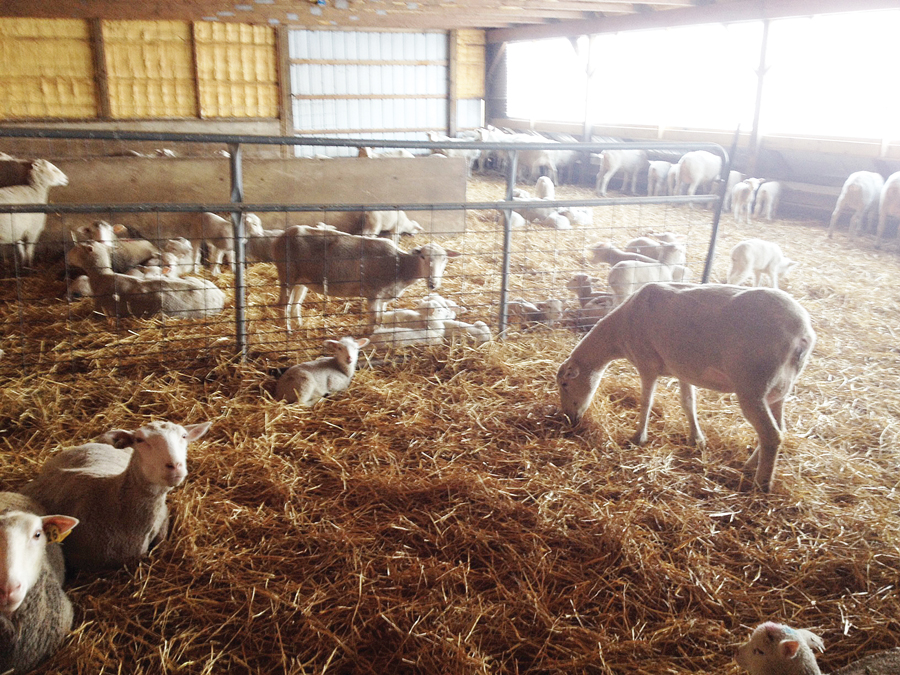 A member of the American Lamb Board, which developed the Industry Roadmap advocating use of the National Sheep Improvement Program for breeding selection, Thorne has seen first-hand the benefits of data-based decisions.

A move as simple as buying rams based on EBVs from NSIP flocks has dramatically increased his lambing rate, and provided the framework for breeding for targeted traits.
A self-titled “refugee from the hog business,” Thorne grew up in the heart of Iowa and worked his way through Iowa State University shearing sheep. He set out on a career in feed sales, but soon decided production agriculture was the way to go. When the pork industry bottomed out in the late 1990s, he saw his profits disappear. New to farming and heavily in debt, he knew he had to make a change.

Thorne turned back to his roots.

He bought 600 short-mouthed Rambouillet ewes from Wyoming. “And I woke up in a hurry,” says Thorne. The sheep were off the western range, a very different environment from southern Michigan. “They didn’t know what a barn was. They spooked if you made eye contact with them.”

But they were solid breeding ewes, and they gave Thorne his start. By 2001, Thorne had added Polypay rams to his flock, and in 2005, he discovered NSIP.
“I kept hearing about the program and the use of data for breeding selection,” explains Thorne. He understood the concept from the beef and swine end of livestock production, and was intrigued. Convinced it was the way to go, he bought twelve NSIP Polypay rams from a well-known breeder in Nebraska.

“They were the sorriest looking lot of rams I’d ever seen,” Thorne says now with a chuckle. But they had impressive numbers.

Thorne had purchased the rams with a focus on the Maternal Index – a weighted composite number that factors in growth and fertility characteristics. Like many commercial sheep producers, he wanted to increase his lambing rate.

“It costs the same to house and support a ewe no matter how many lambs she drops,” says Thorne. “So it makes sense to get the most out of her.” Along with breeding for lambing rate, Thorne takes advantage of the Polypay flexibility to produce lambs off-season (to capitalize on market premiums) and on an accelerated schedule.

He knew there was validity in selecting for the lambing EBVs, but was still shocked by the results.

“By the time the first progeny were mature 3-year-old ewes, my lambing rate had increased from an average of 1.8 lambs per ewe to 2.1. That’s a .3 lamb increase – in one generation.”

His weaning rate increased by the same amount, and both numbers have held steady for his 1,000 ewe flock.

With a healthy lambing rate firmly entrenched in his operation, Thorne is now turning to NSIP EBVs to tweak production.

“We want a better weaning rate,” he explains. Forty to forty-five percent of his ewes are dropping triplets, but only 25 percent are weaning triplets. Too often the third lamb relies on human assistance in Thorne’s newly built nursery. “There’s not much profit in orphan lambs.”

Milk replacer, medicine, heated facilities, not to mention labor, take a deep cut. To increase the weaning rate, Thorne is using milk production and weaning weight EBVs in his breeding program. He buys his rams sight unseen from John Anderson of Lambshire Polypays of Wayne County, Ohio, and has asked for animals from the “second tier” of lambing numbers.

The scenario highlights the true benefit of NSIP EBVs – the ability to target production goals for each individualized operation.

“You set your own target,” says Thorne. “It’s not the same as the next guy. I can pick what I need for my situation.”

Along with lambs for meat, including feeding 90-pound lambs to a hungry Mid-Eastern ethnic market in nearby Detroit, Thorne produces around 250 replacement ewe lambs a year, and raises 1,000 acres in corn and hay. Nearly 18,000 bales of hay feed a suburban hobby horse market. His son, Luke, has been part of the operation for around six years, and son, Cody, has just joined, bringing with him 200 of his own ewes.

“They’re even more into the data,” says Thorne, remarking the boys grew up in a computerized culture. “They’re used to immediate answers. If a question comes up in conversation, they Google it to get the answer.”

And so will their banker.

“Margins are tighter than ever and they’re not just interested in your check-book balance,” Thorne says. “They want to see production data. It used to be if you farmed, you worked hard and you would succeed, but now you have to work at the numbers as much as the physical labor.”

For Thorne it’s a matter of learning to trust the data – sometimes “untraining” the experienced eye – like his experience with his first load of rams.

“If I had depended on sight, I probably wouldn’t have bought those rams,” he says. “I would have picked something big and well-muscled. But they were exactly what I needed and proved to be successful beyond my expectations. It can be hard to put data against experience and change doing what you’ve always done. But that’s what needs to happen. That’s how you make progress.”

For information on using EBVs in your flock, visit NSIP.org and get your copy of the NSIP Ram Buying Guide.