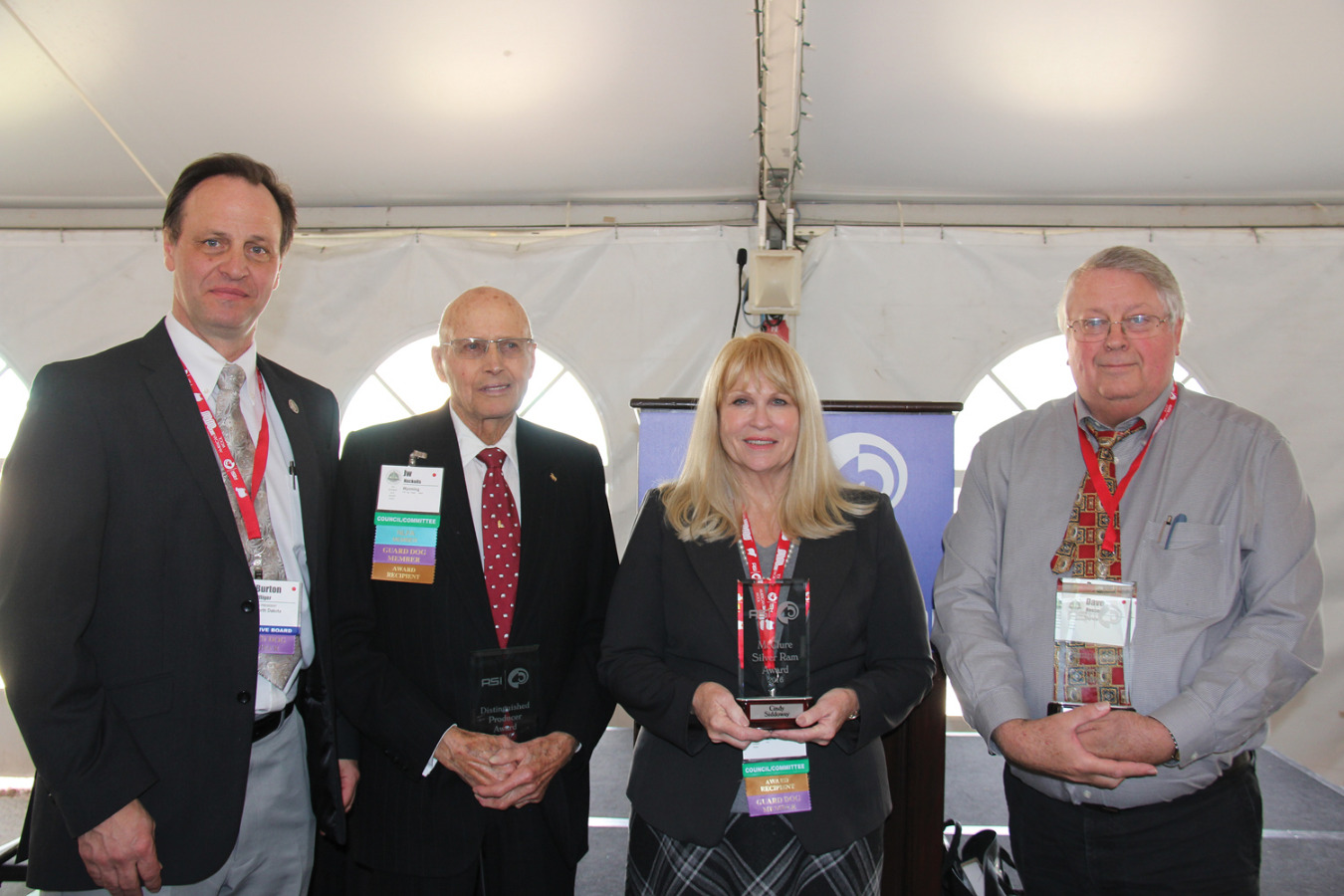 ASI recognized the efforts of three individuals during the association’s annual convention the last week of January in sunny Scottsdale, Ariz. Two longtime sheep producers and a relative newcomer to the industry walked away with the hardware at the industry awards luncheon on Jan. 29.

“All three of these individuals have contributed to the success of the American sheep industry in some form,” said ASI President Burton Pfliger of North Dakota. Pfliger presented engraved plaques to each recipient after providing a brief rundown of the ways they’d worked within the industry. “I think it’s worth noting that we have three individuals who have contributed in many different ways to the industry, but each is certainly worthy of the awards they received.”

Like Pfliger, Cindy Siddoway knows what it takes to lead as ASI President during challenging times. She was honored with the McClure Silver Ram Award, which recognizes a producer who has made substantial contributions to the sheep industry and its organizations.

Siddoway was elected president in July 1999 as ASI was still dealing with the cancellation of the Wool Act and working to determine its role in the future of the sheep industry. Having already served as ASI’s vice president and secretary/treasurer, as well as chair of the association’s legislative council, Siddoway was well suited to lead as ASI’s first female president.

Married to fourth-generation sheep rancher Jeff, Siddoway was just as comfortable in the pasture as she was the board room. She received the award 32 years after her father-in-law, Bill Siddoway, was honored with the same recognition. Bill Siddoway also served as president of the National Wool Growers Association, the precursor organization to ASI.

In her acceptance speech, Siddoway shared some advice that played a role in her years of involvement with ASI.

“If you want to go fast, go alone, but if you want to go far, go with someone,” she said. Thanks to producers such as Siddoway, ASI has indeed gone far. “It’s been the love of my life to work with the sheep industry and I hope to do it for many more years.”

Third-generation rancher Jw Nuckolls of Wyoming was recognized with the Distinguished Producer Award. Like Siddoway, Nuckolls found time away from the ranch to help push the sheep industry in the right direction. He played a significant role in the creation of both Center of the Nation Wool and the Mountain States Lamb Cooperative – two entities that have assisted thousands of sheep producers in marketing their wool and lamb.

Nuckolls still serves on the board at Center of the Nation Wool, based in Belle Fourche, S.D. Along the way, he married Thea in 1959 and the couple have five children who were all in attendance for the award ceremony.

“There’s just something addictive about you people,” Jw told the hundreds of sheep industry leaders in attendance for the ceremony. “It’s been such a pleasure to work in this industry all these years. When I got out of college, I didn’t think we were very effective in marketing our product. So I started working on some things that I thought would help us control our own destiny a little bit. Then I met all these great people in the sheep business and it really became addictive.”

The 2016 Camptender Award went to Florida’s David Bossman, who was nominated by former ASI President Burdell Johnson. While his involvement with the sheep industry is relatively short compared to fourth-generation ranchers, Bossman has worked tirelessly on several insurance programs, which are of vital importance to sheep producers since 2003.

Bossman implemented the existing Livestock Risk Protection-Lamb insurance, had a hand in establishing Casualty Underwriters Insurance Company and played a role in establishing the Sheep Venture Company as well as Food and Fiber Risk Managers Agency. He’s also worked diligently on the new working dog liability insurance that was rolled out during the 2016 Annual Convention and is now available to all ASI members.

“I’m not a big surprise guy, but that was a good one,” said Bossman, who wasn’t told of his selection before the award ceremony. “As they started listing off the accomplishments for this particular award winner, I was trying to think of who it could be. Then I finally realized it was me.”

Also during the awards ceremony, the American Lamb Board and the National Lamb Feeders Association took time to honor several of their members. ALB honored four retiring board members, including Reed Anderson of Oregon, Dan Lippert of Minnesota, Betty Sampsel of Montana and Angelo “Butch” Theos of Colorado.
NLFA’s Cane of Appreciation went to Minnesota producers Dan and Mike Lippert.