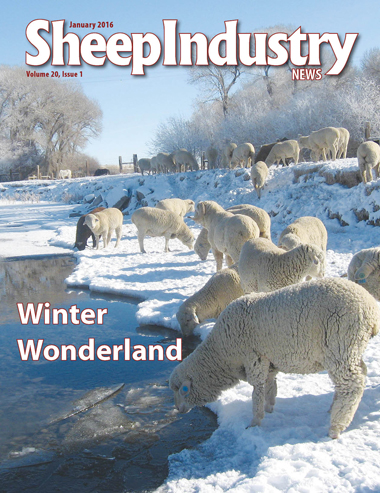 It is hard to believe a full year has lapsed since we last collectively gathered in Reno, Nev., for the150th anniversary of the American Sheep Industry Association. This past year was historic in nature and time, but meaningful and impactful on the future of the industry going forward.

We witnessed the reinstatement of mandatory price reporting, the rewriting and revision of the H-2A immigration program by the Department of Labor, the retention of country of origin labeling on lamb, another large Section 32 commodity lamb purchase and the acquisition of the JBS lamb plant by Mountain States Lamb Cooperative. If the previous listed accomplishments were not enough, we are waiting at the time of this writing for the final language of the Omnibus bill directing the Forest Service to provide like allotments to producers displaced by risk based bighorn sheep exposure.

All in all, mostly positive for the sheep industry. Each individual event would have been enough of a highlight for an entire year, let alone all packed into one calendar year.
This year’s convention promises to bring to the forefront the issues most meaningful to sheep producers from around the country. The FDA Veterinary Feed Directive has spurred much passion on both sides of the issue. The new rules governing delivery of medicines in feed or water – and the relationship with your veterinarian requiring prescriptions – is timely and very important for all sheep industry sectors. The Animal Health Committee has been tasked with working through the details and providing convention attendees with options for debate and policy development.

Another topic expected to generate a lot of interest and questions will be the H-2A session. DOL has agreed to attend and answer questions regarding oversight of the new rule. Wildlife Services and predator control will be discussed on Thursday afternoon by the Resource Council, along with public lands and the controversy surrounding the bighorn and domestic sheep interface.

Legislative policies will be thoroughly vetted and debated along with animal health topics. We hope to find hundreds of producers attending and developing policies affecting farm and ranch life. All meetings are open and comments/questions from the audience are welcomed and encouraged.

You can be an active participant in policies to guide the association and programs for the coming year. The wool and lamb industries show up in force with hours of review of market conditions and current issues relevant to producers. I anticipate much discussion about ownership changes in the lamb companies that are to take place this winter and how those actions will impact competition, pricing and mandatory price reporting.

The announcement that Mountain States intends to assume ownership and operation of the JBS plant in Greeley, Colo., has dominated the current discussion among sheep producers and industry watchers. One concern with the sale is how it will affect price reporting from the plant. JBS has been a participant in lamb price reporting for years, however, the cooperative price reports have not been accepted by USDA Market News. Many producers have concerns about whether price reports will be available after the transaction. ASI included language in the congressional reauthorization of mandatory price reporting for lamb this past September, which we believe will cover the situation following this acquisition and allow the cooperative reports to be included. We have reminded USDA of the congressional language and look forward to USDA officials speaking to this point during our convention.

As you can see, there are many reasons for those in the industry to join us in Scottsdale, Ariz., Jan. 27-30.

Aside from the important issues to be discussed, there is policy to be developed and decisions to be made affecting each of us. This convention gathering also allows us to reconnect with the people we know as friends and colleagues.

This past year, I have had the privilege to travel among many of ASI’s state memberships. In December, I was fortunate to travel to the state of Ohio. Thank you to Roger High for the invitation to address the association there. While in Ohio, I visited the Bunker Hill Farm owned by Bill and Susan Shultz. Susan also sits on ASI’s executive board. The Shultz’s were very gracious hosts and shared their home and impressive NSIP Suffolk sheep flock.

Those on hand for the Ohio gathering reminded me that the best part about all we do is the interaction and the friendship we develop and maintain with agriculture based people from coast to coast. Thank you for your friendship and membership in the American Sheep Industry Association.

I hope your Christmas holiday season allowed each of you to focus on what is good in the world and what each of us is most thankful for. A verse of a song recently caught my attention that drove home the importance of Christmas to me. It stated, “Empires and countries have risen and fallen but the babe in the manger still lives.”