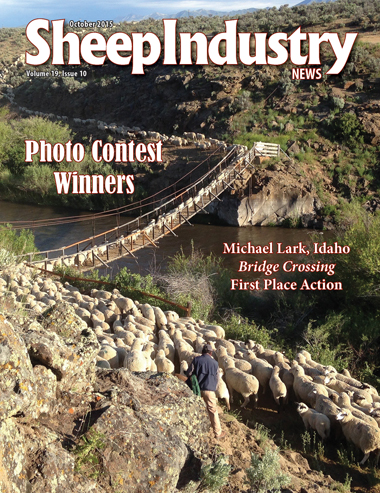 It is that time of year, feeders are in the spotlight – competing for supplies to fill lots and lock in orders. For the remainder of the marketing year, net feedlot supplies are drawn down as feeders continually update their calculated margins to measure profitability.

Every lamb might not make money, it is the average which defines the bottom line. It was estimated that direct-trade and 90-110 lb. auction feeders purchased this August will require a slaughter lamb price of about $150 per cwt. to break even. For lighter-weight, 60 to 90-lb. lambs purchased at auction, the break-even price drops to about $146 per cwt. Early estimates of slaughter lamb prices by the Livestock Marketing Information Center on Sept. 9 put fourth-quarter averages at about $159 per cwt.

LMIC forecasted that national, direct slaughter lamb prices on a carcass basis could range from $312 to $324 per cwt. in the fourth quarter, higher than the third quarter and 0.6 percent lower year-on-year.

As the industry enters the fourth quarter, holiday demand will slowly ramp up and harvest lamb prices will likely gain. However, there might be a lull in the slaughter lamb market in October and November as packers get a better feel for the supply effect of USDA lamb purchases and imports. Given relatively low feed costs, feeders are in a good position to sit tight until December.

In early September, LMIC forecasted that imports could increase marginally into the fourth quarter, but settle at 20 percent lower than a year ago, also bringing total supplies up quarterly, but down 20 percent. Last December, imports flooded the market and likely contributed to the current build-up in freezer inventories.

Feeder Market Weakened in August
A weaker August feeder lamb market is no need for alarm. Historically, August and September are turning-point months, a lull, a stabilization in the market before it finds its footing and gears up for stronger prices through the year’s end.

A late August sale by the Northern Video Auction in Montana cleared about 10,000 head with another sale scheduled of about 6,500 head in late September. The September sale had good clearance, with no “No Sale” refusals by producers. Lambs weighing from 80 to 90 lbs. brought $182 to $197 per cwt. Lambs were sent to Texas, Michigan and the Midwest, and a few to Colorado.

“Lack of demand and imports along with currency continue to be a struggle point and packers continue to keep slaughter numbers lower than normal for this time of year,” (USDA/AMS, 9/4/15). Feed cost is not necessarily a factor because costs are lower, not higher.

In early September, the USDA crop report took the corn market by surprise, lowering prices and forecasted prices. Actual field estimates revealed record yields in the northern and western Corn Belt. No. 2 yellow corn averaged about $3.67 per bu. in August, down 10 percent monthly and 3 percent lower year-on-year. At $3.65 per bu., farm prices are expected to be the lowest since the 2009-10 marketing year when corn averaged $3.55 per bu. (USDA/ERS, 8/2015). Jim Hilker at Michigan State University forecasted that there’s a 50 percent chance December corn will range between $3.30 and $3.89 per bu.

Second Round of Lamb Purchases Announced

The strong U.S. dollar relative to the Australian dollar has prompted increased 2015 lamb imports this year. The U.S. Department of Agriculture’s $10 million commitment to purchase domestic lamb – fresh or frozen – has the potential to support lamb prices across the industry in this period of high imports.

Meat & Livestock Australia initially forecasted that 2015 would see a “significant drop in production” and a subsequent “contrast in exports.” However, by July, M&LA saw slaughter steady with a year ago and heavier carcasses yielding increased production year-on-year. Increased lamb production and drier-than-normal rainfall prompted increased marketings.

In July, the M&LA commented, “Despite high volumes of sheep meat in U.S. cold stores, the volume shipped to that market during the January to June period is up 9 percent year-on-year, with the average export unit price up 13 percent year-on-year, at $10.62/kg (about U.S. $3.41 per lb.). The weaker A$ has been of significant assistance.

“Interestingly, lamb shoulders shipped to the U.S. (a market where there are high volumes reported in cold stores) have increased 45 percent year-on-year,” (7/2015).

Some Australian commentators reported that the current market dynamics are not sustainable (Sheep Central, 9/8/15). In fact, Australian slaughter rates began to drop off faster than expected in September. Subdued demand put downward pressure on producer prices. In July, M&LA forecasted lower lamb exports in 2016 and 2017 before rebounding sharply in 2018.

The 1999 Livestock Mandatory Reporting Act which oversees Mandatory Price Reporting was up for renewal last month. MPR requires many sheep industry participants to report details of trades, a service that was once voluntary. The bill passed the House this summer and was forwarded to the Senate.

ASI issued recommendations earlier this year for improved lamb reporting. On the table for Senate review is improved reporting of imports to enable better comparison with domestic product. Hopefully we have a new and improved MPR at the time of this printing. If reauthorization is delayed, industry will likely be asked to report trades on a voluntary basis.

At the beginning of September, 39.1 million lbs. of lamb and mutton were in cold storage, 10 percent higher monthly and 26 percent higher year-on-year. This year was the highest August volume on record. If freezer inventories were all domestic product, it is equivalent to more than three months production. The build-up suggests that packers and importers do not want to drop prices sufficiently low to move product.

By early September, the industry had cleaned up most of its extra-heavy slaughter lambs, raising average prices of commercial harvest lambs in carcass-based formula sales. On average, formula lambs averaged $298.73 per cwt. ($150.85 per cwt. live-equivalent), up 3 percent monthly and up 0.4 percent year-on-year. Live weights of carcass sales came down 10 percent to 159.36 lbs., and 11 percent heavier than a year ago.

Prices of live, negotiated slaughter lambs averaged $156 per cwt., up 8 percent monthly and up 2 percent year-on-year.

Slaughter lamb prices at auction averaged $151.99 per cwt., down 0.23 percent monthly and 2 percent lower year-on-year. Prices ranged from $148 per cwt. at San Angelo to around $153 per cwt. at Fort Collins, Kalona (Iowa) and South Dakota.

Pelt prices remained dismally low. The stagnant market was 43 percent lower in August compared to early 2015 and 36 percent lower year-on-year. Many pelts were not worth anything, while at the high end, pelts were only worth $3 to $5 per piece – a far cry from $16 per pelt enjoyed in 2011.

The USDA Agricultural Marketing Service reported that Muharramm buyers do discriminate and look for 50 to 110 lbs. lambs. In July, 100-lb. Choice and Prime lambs brought $191 per cwt., and $176 per cwt. in August.

New Holland is primarily driven by Islamic buyers and yet, it does see some kosher orders. In late August, the auction saw a demand spike for heavier lambs – particularly the heavier ‘feedlot’ fair lambs – for the Jewish New Year, Rosh Hashanah.

The devaluation most immediately makes Chinese exports more competitive on world markets, giving wool consumers in the U.S., Japan and Europe a boost. However, and perhaps more importantly, the devaluation is a signal of the slow-down in Chinese growth. Demand for finished wool products by Chinese consumers helps support international raw wool prices.

In August, the Australian dollar fell to 73 cents per USD, down 5 percent from July, and a 22 percent drop from 93 cents last summer. In general, wool exporters gain when the Australian dollar depreciates. However, this time around, the yuan depreciation trumped other influences, introducing uncertainty into markets and lowering U.S. dollar-denominated commodity prices.

The Australian wool market in August was heavily burdened by the mixed reaction to the Chinese devaluation and lower Australian dollar. Ultimately, wool markets settled at price levels lower than pre-recces levels in June. Many buyers sat out of auctions, while others were encouraged by the further drop in the U.S. to Australian currency and bought wool at lower levels. Overall, lower growth in China might depress prices further before the rest of the world is strong enough to support the market.

The strong U.S. dollar hurt raw wool prices this spring, but further wool processing can counter-act that effect, supporting domestic jobs and local economies. More than half of U.S. raw wool produced is exported, but a sizable share stays state-side, for added-value processing, textiles and use by the U.S. military.

In the first nine months of the wool marketing year (October to June), total U.S. wool exports fell 21 percent to 1.9 million kgs year-on-year while its total value was off 40 percent to $13 million.

The stronger U.S. dollar generally constrained wool exports, but with some caveats. The lion’s share of the total contraction was a 14 percent drop in raw wool exports to 1.6 million kgs which led to a drop of 29 percent to $10.2 million. However, carded wool exports gained in volume and value with an $8 to $11 per kg gain. Carded wool tops held their export value at about $16 per kg although exports were down in volume.