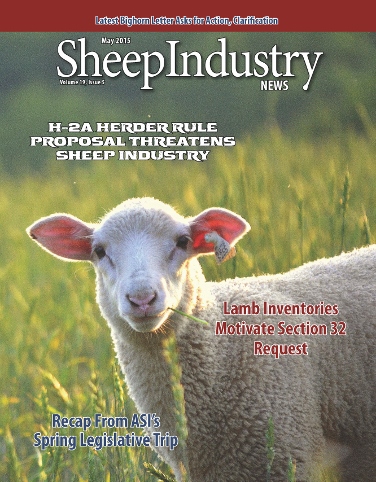 Leaders attending briefings at the U.S. Department of Agriculture (USDA) in late March successfully relayed concerns and of the sheep industry and in turn learned where pertinent departments stand on issues.

Scrapie: The proposed rule to update the scrapie eradication program, which the industry has promoted, is at the White House’s Office of Management and Budget and is expected to be published any day. This was the message delivered by Animal and Plant Health Inspection Services Chief Policy Officer and Associate Deputy Administrator of Surveillance, Preparedness and Response Services, Dr. Thomas J. Myers.

Myers also relayed that a revised regulations for the importation of sheep and goats is still in the drafting process, putting it more than a year off from being published. Once this regulation is revised, better progress can be made for the export of lamb meat, Myers continued.

Wildlife Services: Bill Clay, Deputy Administrator for Wildlife Services, complimented ASI for the outstanding job it did by getting nearly 200 signatures on the letter supporting the work of the agency. This kind of recognition provides enormous assistance to Wildlife Services when it comes to procuring funding, Clay commented.

The President’s budget recommends that Wildlife Services receive a $9.6 million reduction in funding for the next fiscal year with the proposed reductions targeted to hit in the areas of rabies control and natural resources.

“We need to provide more outreach workshops to educate the public on wildlife damage management as well as showcase the research that is being done to advance the non-lethal work of the agency” said Clay.

Meanwhile, the European guardian dog program being assessed in Montana and Idaho now includes 41 dogs in the trial study. It is anticipated that 20 more dogs will be add in 2015. Clay eluded to the fact that maybe down the road, Wildlife Services could be a source for producers to acquire these dogs for livestock protection.

Clay disclosed that Wildlife Services has terminated its study to develop a theobromine and caffeine mixture to managing coyote depredations on livestock. No more dollars will be spent on developing this program.

“Theobromine will kill a coyote,” said Clay, “but getting them to pick it up in a lethal dose is the problem.” An efficacy rate of 90 percent is needed to move the program out into the field and we were only able to achieve a rate in the low 70s, Clay added.

Trade: Paul Spencer, director of the animal division with the Foreign Agriculture Service, said the agency realizes that the sheep industry has not gotten the attention it needs to resolve lamb exports due to the bovine spongiform encephalopathy (BSE) issue from 2003.

“Barriers for lamb were unfairly imposed because of the BSE case in beef,” he said. Imminent lamb trade with Taiwan is encouraging. Formal requests to resume trade have been submitted and Taiwan’s audit re-port appears positive on the U.S. production systems.

“Barriers to American lamb imposed due to BSE in cattle have been very slow to be removed,” added Peter Orwick, ASI’s executive director. However, Orwick complimented Spencer and Trade Advisor Anne Dawson for progress, noting that formal requests to open Japan and South Korea markets to American lamb have been made.

“Price reporting goes dark if the act is not reauthorized by that date.” Lamb was most affected the last time there was a lapse in reporting since the importers, 50 percent of the lamb inventory in the United States, chose not to report when the mandatory requirement expired.