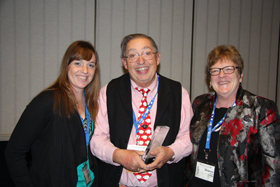 Two men with long and distinguished careers in the sheep and wool industries have been selected to receive the American Wool Council’s Wool Excellence Award.
Dr. Rodney Kott and Dr. Parvez Mehta will be honored during ASI’s Annual Convention in Reno, Nevada Jan. 28-31, 2015.
The Wool Excellence Award is given during the Wool Recognition lunch, which will be held on Thursday, Jan. 29.
The award is sponsored by the Wool Roundtable, which includes representatives from various segments of the wool trade, such as wool research, buying, production, warehousing, processing and fabric manufacturing.
Dr. Kott spent more than three decades implementing sheep and wool educational programs as the Montana State University extension sheep specialist and was instrumental in the development and continuing evolution of the National Sheep Improvement Program Raised on a sheep and cattle farm near Fredericksburg, TX., Dr. Kott received his B.S. and M.S. from Texas A&M University. He earned his Ph.D. from New Mexico State University in 1980.
After graduation, he joined Montana State University (MSU) as an Assistant Professor of Animal Science and Extension Sheep Specialist. He was promoted to Associate Professor in 1986, became a full professor in 1994 and served in that position until his retirement in 2013.
During his 33 years at MSU, Dr. Kott made significant contributions to teaching, extension, research and service to MSU and the State of Montana as well as the national sheep industry. At MSU, Dr. Kott developed programs for providing educational support to county agents and producers in areas of sheep management, nutrition, breeding, reproduction and wool production. With his participation in the Sheep and Skeen Institutes, Dr. Kott reinvigorated the wool pools in Eastern Montana enabling them to participate in a global market.
“Dr. Kott has been the standard bearer in establishing extension programs that are timely, relevant and of high value to individual sheep producers and the agriculture community,” said Rita Kourlis Samuelson, ASI’s wool marketing director. “He reinvigorated the Montana wool pools so that they may participate in a global market.”
Dr. Mehta has been the Wool Development Consultant for ASI since 1995.
During his two decades with the organization, he has worked with the U.S. wool textile industry and military in developing wool products. He was instrumental in fire retardant wool products and Superwash, plasma, enzyme treatments to wool.
Dr. Mehta also served as the go-to person relative to wool science and new product developments.
“It is indeed an honor to be nominated for this years’ Industry Excellence award,” said Dr. Mehta. “Even more gratifying to be acknowledged and enthusiastically canvassed for this nomination by my employers, Industry and consultant colleagues. I am very lucky to be doing what I love and to work for an organization which values and offers an environment for creativity and personal development.”
Dr. Mehta left his native India in 1960 after earning degrees in Physics, Chemistry and Mathematics. He later earned his doctorate in polymer Physics from Glasgow University in the United Kingdom.
His first job was with ICI Fibers in England in the Physics Research laboratory, where he worked on developing a producer crimping process, for which he earned his first of the seven patents.
In 1967, he joined the premier wool research and development unit of the International Wool Secretariat.
Over a 16-year period at IWS, Dr. Mehta authored three books, seven patents and over 50 articles in technical journals.
“Parvez has devoted his life to wool and made infinite contributions. It has been a pleasure and privilege to work with such a knowledgeable legend in the wool industry,” said Samuelson. “Through his vast experience in wool, his physics/chemistry/mathmatics education and commitment to wool the industry has realized many benefits.”