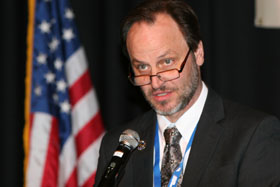 The ASI Board of Directors elected new officers Jan. 31 during the 2015 ASI Convention. Elected to the office of president is Burton Pfliger, N.D.; Mike Corn, Roswell, N.M., was elected as vice president; and, Benny Cox, San Angelo, Texas, is ASI’s new secretary/treasurer.
Pfliger is a third-generation sheep rancher who was born into the industry. Pfliger and his wife Pattie run approximately 400 ewes, which make up a purebred Hampshire flock, a purebred Suffolk flock and a flock of Rambouillet/Dorset cross commercial ewes. The Hampshire and Suffolk flocks are used to produce range and terminal sires.
Prior to being elected president, Pfliger was ASI’s vice president. His experiences include serving as the Region IV representative and as the chairman of the Production, Education and Research Council and the Wool Council, and additionally, he served on the Legislative Action Council and the Predator Management Committee. He was elected to four terms as president of the North Dakota Lamb and Wool Producers.
In addition, Pfliger served as vice chairman on the executive board of the Ag Coalition in North Dakota, and has served as the chairman of North Dakota State University’s (NDSU) Board of Ag Research, Livestock Granting Committee. Pfliger was nominated to NDSU’s Agriculturist of the Year and was presented the North Dakota Master Sheep Producer award in 2005.
Pfliger earned a Bachelor of Science Degree in Animal Science from North Dakota State University.
“The sheep industry is in a very exciting and a very challenging time, and I look forward to working with the entire industry to strengthen and build upon what we’ve accomplished in recent years,” said Pfliger, who credited outgoing president Clint Krebs with setting a standard for hard work and dedication to the industry. “I am honored to be elected by my fellow producers and look forward to working with all segments of the industry to improve and strengthen domestic sheep production.”
Corn owns and operates sheep, cattle and goats, lambing around 3,000 ewes annually. A fourth-generation rancher, he is part of a family that has been raising sheep in the Roswell area since the 1880s. Corn owns and operates his own ranch, as well as leases additional ranches, operating around 125,000 acres. His herd consists of white-faced, fine-wool sheep, mainly a merino cross.
Corn is also the majority owner of Roswell Wool Warehouse, which he and his partners purchased in 1992.
Roswell is now the largest wool warehouse by volume in the United States with an additional facility in Long Beach, Calif. Corn says he believes the warehouse continues to be successful because it is operated by “producer oriented” owners who are also part of the sheep industry.
Corn has been chairman of ASI’s Let’s Grow Committee, the Chaves County Farm Bureau, New Mexico Hereford Association and is past president of of the New Mexico Wool Growers Association and of the Chaves County Soil and Water Conservation District. He previously represented Region VI on ASI’s Executive Board and served as vice chair of ASI’s Resource Management Council.
Corn earned a Ranch Management Certificate from Texas Christian University. He and his wife, Jennifer, have three children – Jessica, Bronson, Jenny.
“I plan to serve ASI and President Pfliger to the best of my ability as vice president,” said Corn, who was ASI secretary/treasurer for the past two years. “We have gained some good momentum in the past two years and my goal is to keep that going. The Let’s Grow Committee has great promise, and there are many other efforts ongoing that give great hope for the sheep industry.”
Cox, an active sheep and cattle producer raising his own sheep as well as managing flocks of sheep for the Cargile Ranch Company, will serve a two-year term as secretary/treasurer. In his job as sheep sales manager at Producers Livestock Company, he directs auctions from within the sale ring each week. He has been with Producers for more than 45 years, having started feeding and receiving animals while in high school and continuing with the organization while obtaining his agriculture business degree from Angelo State University.
“I think that an important function of ASI, if not the most important, is our legislative drive to protect our way of life,” said Cox. “There are those who are against animal agriculture as well as those that would try to seize our lands who we must counter.”
Cox represented Region V on ASI’s Executive Board and served as co-chair of ASI’s Lamb Council. During Cox’s presidency with the Texas Sheep and Goat Raisers’ Association, his focus was to continue to be a big voice in the fight to maintain services, which included Wildlife Services, the Texas Animal Health Commission and protecting private property rights, to name a few.
“I wish to work with all producers,” said Cox. “As an officer of ASI, I feel that it is very important to be an advocate for the entire sheep industry, not just for my own business or organization.”