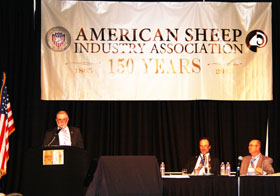 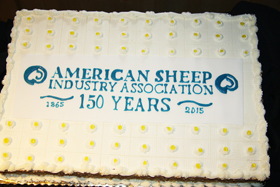 The American Sheep Industry Association celebrated its 150th anniversary during the organization’s annual convention in Reno, Nev., Jan. 28-31.
Registration numbers reached a 15-year high at more than 575 registrations, as sheep producers from across the country came together to acknowledge the accomplishments of the oldest national livestock association in the United States.
“Stronger lamb and wool markets in conjunction with the 150th festivities offered a strong foundation for record attendance at this year’s meeting,” said Peter Orwick, ASI executive director. “A record fundraising target was also achieved by our members.”
Adding to the excitement of the organization’s longevity, the Sheep and Goats report released during the meeting recounted that the sheep and lamb inventory is up 1 percent and the lamb crop is up 2 percent from the previous year. The last National Agricultural Statistics Service report to show an increase in sheep numbers occurred in 2006.
Additional evidence of the excitement in the industry was seeing more than 40 young entrepreneurs from 12 states attend the sessions. Participating in age-specific meetings as well as in the general sessions, these participants brought with them an energy level that could be felt throughout the event.
Animal welfare and animal health were in focus during committee meetings that are a big part of the convention.
“We need to connect, engage and protect,” said Kay Johnson Smith, executive director of the Animal Agriculture Alliance (AAA), to meeting attendees. “I would encourage each of you to proactively communicate with consumers by putting a face on your business and on agriculture in general.”
Johnson Smith encouraged all producers to take a critical look at their operations and policies to identify vulnerabilities.
Nevada Congressman Mark Amodei shared his no-holds-barred comments with the ASI Board of Directors, as he talked about some of the challenges that face the sheep industry in his state and around the country. From the Endangered Species Act and the bighorn sheep conflict to waters of the United States rule, Amodei expressed his dedication to supporting agriculture.
With a majority of the industries’ resources being funneled into the bighorn sheep issue, reports covering the current research, progress with the litigation and legislative action were presented to attendees.
“The buzz heard in the hallways was a result of a passion for the industry, increased attendance and the enthusiasm brought about by the growth in the industry,” said Clint Krebs, who wrapped up his term as ASI president during the convention. “Celebrating our 150th anniversary in conjunction with this convention has allowed for a blend in the meetings of new programs and recognition of our past while looking to the future.”