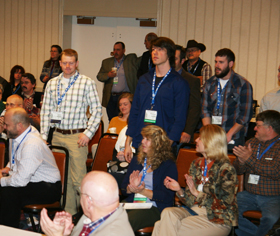 The next generation of sheep producers have began to step forward, and that is pleasing those involved in ASI’s Emerging Entrepreneurs Committee. During the ASI Convention in Reno, more than 40 young people participated in the group’s meetings and activities.
“The numbers were up, and so was the progress made by the young people, who seem to be more willing to come forward and talk about the future of the industry, “ said Burdell Johnson, chairman of the Emerging Entrepreneur Committee. “They are finding their own way and starting to go their own way. There is a lor of enthusiasm, and I noticed a lot of progress compared to last year’s convention.”
This year’s schedule was set up so the young people could go out and attend other committee and council meetings held during the convention – a way to educate themselves about the entire industry.
Johnson said the group is already working on plans for the 2016 convention, which is expected to include some educational opportunities specifically for young producers and future producers.
“The group will be looking for sponsorships to help with setting up some education sessions, and the committee will be working to select topics.” The group is also working on attracting more young producers and young people involved in agriculture by increasing its social media presence.
“What’s really encouraging is that we’re starting to see some leadership in the committee and more kids taking ahold of things and ideas,” said Johnson.