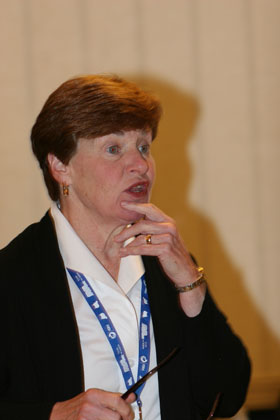 Two- and three-year-old crossbred ewes in a low-input production system can have acceptable lamb survival rates, according to early results from research at the Meat Animal Research Center in Nebraska.
During the ASI Production, Education and Research Council meeting in Reno, Kreg Leymaster, a researcher at the center, provided an update on efforts to show whether “easy-care” genetics can reduce labor and still provide enough prolificacy and maternal ability to realize acceptable lamb survival.
“Reducing labor per ewe is one of the best opportunities to increase profitability and attract new investments to the sheep industry,” said Leymaster.
The experiment uses the Romanov breed as the genetic foundation for ewes and five ram breeds to complement the Romanov germplasm – Rambouillet, Dorset, Dorper, White Dorper and Katahdin.
A high-input system is compared with one with low inputs. In the low-input system, the survival rate of lambs born to one-year-old ewes was 83 per 100 for singles and 72 for twins; ewes two years of age had survival rates of 87 for singles and 90.5 for twins; ewes three years of age had rates of 85 and 89.5, respectively.
“Relative to singles,” said Leymaster, “It is not a challenge for two- and three-year-old Romanov crossbred ewes to raise terminally sired twins.” He added that the ewes did fine with triplets: 47% of the crossbred Romanov ewes, ages two and three, raised triplets.
Leymaster also provided an update to PERC and committee chair Susan Shultz on genetic evaluation being used to assess susceptibility to ovine progressive pneumonia virus. The bottom line, he said, is that the primary cause of lifetime infection is likely from non-maternal exposure that occurs after naïve ewes join a flock of infected breeding ewes.
“The key management strategy,” he said, “is isolation of young ewes to prevent subsequent non-maternal exposure.”
The research is also searching for additional genes affecting susceptibility to OPP virus. Leymaster said the original chip had only 50,000 markers, but they are now sequencing the entire genome to give about 3 billion genotypes per sheep. Of 138 sheep, 77 have been completed at a rate of about 500 billion genotypes per week.
Bret Taylor, a research scientist with the USDA-ARS Sheep Experiment Station near Dubois, Idaho, reported that two major studies of interest to producers have been completed and the results reported.
Data for the terminal sire evaluation of Suffolk, Columbia, Texel and NARC3 have been published and are applicable for identifying sires for an operation’s particular goals.
Results from post-fire recovery models, upon which little work had previously been done, have also been published.
Taylor said that some wildlife agencies in sagebrush environments had been hesitant to let sagebrush communities burn for fear of losing habitat for sage grouse. But, he said, old growth communities of sage are not that good for sage grouse. Further, Wyoming big sage models were being used as the recovery model.
But he said Wyoming big sage takes much longer to recover, so it’s not a good predictive model.
The current study shows that 12 years after the last burn is when you double your sheep carrying capacity. Taylor said he is hopeful that land management agencies will start importing a 20-year post-fire recovery timeline into their models and grazing plans instead of the 30- to 40-year timeline that had been used.
“We’ve been doing this at Dubois for 90 years,” he said, “and we have the greatest sage grouse count in eastern Idaho.”
Other work at the sheep station has shown that a selenium supplement can work to correct selenium deficiencies. And the evaluation of needle-free vaccination, with a pulse system from Lenexa, shows that it works as well as needle vaccination. And it saves money because of the huge savings on labor.
Taylor said needle-free vaccination has been used in other industries, and that 3-inch wool presents no problem.
Julie Young, supervisory wildlife biologist for USDA/APHIS/Wildlife, updated PERC members on predator control being done at the National Wildlife Research Center, including an initiative evaluating new breeds of livestock protection dogs.
Many of the dogs currently used were brought in to deal with small predators, like coyotes. But the expansion of wolf and grizzly populations has led to an evaluation of larger European breeds to see how they perform relative to livestock survival and predator response.
Breeds being evaluated are Kangal from Turkey, a short-haired mastiff, 26-31 inches tall and 110-138 pounds; Karakachan, an ancient longer haired breed, 25-30 inches tall and 88-121 pounds; and Transmontano, a Portuguese mastiff, 30-34 inches tall and 121-143 pounds.
Young said the experiment is monitoring space use with GPS collars on predators and dogs and GPS tags on sheep. It is also evaluating livestock protection dog behavior, encounter rates, responses to predators, sheep survival across treatments and producer perceptions.
A pilot study in 2013 monitored 13 dogs across five bands of sheep in Montana and Idaho. After receiving thumbs up to move forward, the work was expanded last year to 45 dogs across 15 bands in Montana, Idaho, Oregon and Washington. This year, the researchers will add Wyoming, bringing in all states with overlap of wolves and grizzlies, working with 16 producers running 20 bands. Because data from the first year are preliminary, Young said it would be inappropriate to present them, but she said the study will continue for at least two more years.
Asked whether the study is looking at public interaction with the livestock protection dogs, Young noted that many of the producers in the study are in remote locations, so there has been limited interaction with humans.
However, she said that some of the new producers in the study will be closer to areas of hikers and bikers, so she plans to look qualitatively at those interactions this year or next.