It took three generations for Theos Swallow Fork Ranch to find its niche. Angelo Theos built his business on the foundation of his forefathers, and has taken it to new heights, supplying around 1,800 lambs a year to Whole Foods Market. 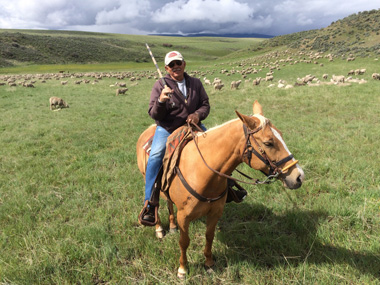 It all started when his grandfather, also Angelo Theos, traveled from Greece, through Ellis Island, in the late 1800s. He settled in Price, Utah, where he found work in the coal mines. There he partnered with three new immigrant brothers, saving what few dollars they could to buy sheep. The elder Angelo got more than sheep from the deal. He returned to Greece to marry his partners’ sister, and they settled in Utah where they raised their five sons and a daughter.

In the early 1920s, the Theos family returned to Greece, intending to retire. But retirement was not in Theos’ blood. They once again took up raising sheep, this time in Colorado, where the family remains today. He accumulated nearly 15,000 acres, including Angelo’s prolific winter pasture.

The younger Angelo took his turn with the operation after finishing college in 1970. “I wanted to get back to the ranch,” he says. “My heart was here.”

Now his son, and soon a grandson, are part of the ranch that utilizes 150,000 acres of private and public grazing lands in northwestern Colorado to support 3,000 ewes and 600 replacement ewe lambs. The ample space and pasture enable a natural-fed, hands-off approach required by Whole Foods, and allow Theos to tap a lucrative direct market.

“We really haven’t had to change much,” says Theos. “It’s pretty much just the way we do things.”

It was several years ago at a Colorado Wool Growers convention that Theos heard a couple talk about direct marketing to Whole Foods. He took a contact number, and the wheels began turning. A company representative visited the farm. “It was July, and the natural, pristine forest was beautiful, filled with fresh water and wildflowers,” tells Theos. “He was impressed.”

His wife and son filled out a 100-plus-page application verifying their “natural” production procedures, and they qualified for the program. Whole Foods took 200 lambs the first year. “They went like hotcakes,” says Theos. “They immediately wanted more.” He sold them the 50 he had available. The next year, Whole Foods wanted 800 lambs; then 1,200; the next year 2,000.

Whole Foods markets the lamb as a natural and local product. One of its criteria is less than six hours shipping to slaughter and the trip to Superior Farms Sheep & Lamb Slaughter Plant in Denver is four hours. The meat is distributed to four neighboring states – Colorado, Arizona, Utah and Kansas.

“Our sheep are always on fresh feed,” says Theos. “They’re never grain fed.” That’s a priority for Whole Foods, as well as the absence of antibiotics. If Theos’ sheep need treatment with penicillin for medical purposes, they are marked, and sold elsewhere. Theos says that accounts for 1-2 percent of lambs produced in any given year. Around 80 percent of each year’s crop heads to market.

Theos raises Merinos, for the wool and meat. “They told me in college I couldn’t have both,” he says. “But we do.” He sells the market lambs for meat and keeps ewes as replacements, breeding 60 percent to Suffolk and Suffolk-Hampshire crosses and 40 percent to Merino rams. “The lambs grow quickly and the fiber sells at a premium. With twinning ability and high weaning weights, we have the best of both worlds.”

“We couldn’t contain them up in the forest if we wanted to,” says Theos. “We bring them in to castrate, for tagging, and for shearing.” He hires Peruvian shepherds who he says are “very gentle with them.”

The plan comes with added costs. “It’s not like the old days when the buyer came to your ranch and all the lambs were loaded and shipped in two days,” says Theos.

Shipping the lambs in installments from September through mid-December requires leasing extra pasture, and hiring extra shepherds. Whole Foods does cover some of the expense. Theos also participates in marketing events like in-store lamb tastings. “I’ve seen the same employees there for eight years. That says something about a company.”

“This is not for everyone,” adds Theos. “There are hoops to jump through. But we’re in the groove now. Their requirements fit the way we raise our sheep and the premium is enough to keep going. It works for us.”