Within the constrain of strong imports, the commercial U.S. sheep and lamb industry continues to struggle to maintain its market share, but indicators of strong meat demand and strong consumer spending may help pave the way for expanded U.S. opportunities this summer. In early May, the U.S. Department of Agriculture Agricultural Marketing Service (USDA/AMS) reported that harvest numbers were low “as demand continues to be low and storage space is starting to become more of an issue. Consumer demand is still the largest struggle point at this time and packers are continuing to decrease bids,” (5/8/15).
Although pork and poultry prices are softening, beef prices remain high and this might be the single-most important factor supporting lamb demand this summer. In March, the price of All‐Fresh beef was 14 percent higher than last year in real terms. “Strong consumer demand is revealed by consumers’ continued willingness to pay very high prices for beef products,” (Daily Livestock News, 5/11/15).

A proposed Section 32 lamb buy will also hopefully help support the live market in 2015. In April, the American Sheep Industry Association (ASI) requested that the U.S. Department of Agriculture’s (USDA) Livestock, Poultry and Seed Program consider the implementation of a section 32 lamb-meat purchase. The live lamb market has been relatively depressed this year and strong imports in January and February provided little relief. 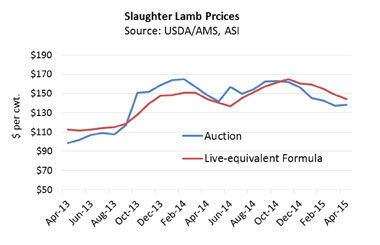 ASI explained that depressed slaughter lamb prices at auction, higher cold storage stocks and higher imports “justify this request,” (ASI Weekly, 4/2015). Slaughter lamb prices at auction were about $18 per hundredweight (cwt.) – or 11 percent — lower during the first trimester of 2015 compared to a year ago. At 36.8 million pounds, the amount of lamb and mutton in cold storage in March, 2015, was 5 percent higher from the previous month and 40 percent higher year-on-year. For perspective, that is nearly triple the level of 2008. In addition, the strength of the U.S. dollar is contributing to a higher volume of imported lamb and contributing to price pressure on the U.S. market. Lamb imports were 10-percent higher in the first quarter compared to a year ago.

In plain terms, there is too much product chasing too few consumers. Unfortunately, quality can suffer which serves to further exacerbate the situation. In January and February the percent of yield grades 4s and 5s in total harvest averaged 23 percent, compared to 19 percent a year ago. Yield grades 4s and 5s can reduce the amount of sellable product due to increased back fat. More yield grades 4s and 5s in harvest suggests market-ready lambs are gaining weight in feedlots. Lambs on formula trades at harvest averaged over 165 lbs. in April. Furthermore, the number of lambs trading on formulas weighing over 95 lbs. carcass weight (190 lbs. live) was 10 times that of a year ago.

The industry is taking advantage of alternative marketing channels to help advert the overfat problem and get old crop lambs to market. USDA/AMS reported that there has been some relief as the Mid-West is still pretty current on inventory and has been able to take a few loads of Colorado lambs into their harvest facilities (5/8/15). Additionally, AMS reported that many lambs from California are being shipped straight into Midwest feedlots.

Feeder lamb prices in direct trade averaged $142.88 per cwt. Without a March trade to compare, prices averaged 17-percent lower than $172 per cwt. in February and 18-percent lower year-on-year. Over 9,000 head traded in April after no trades were reported in March and just over 2,000 head in January and February.

Slaughter lamb prices on a carcass-based formula averaged $288.61 per cwt. in April, 3-percent lower monthly and down 1 percent from a year ago. On a live-equivalent basis the average was $144.37 per cwt.

Pelt Quality at Issue in April

Cases of seedy pelts in April likely contributed to the soft U.S. pelt market in April (derived from USDA/AMS, 4/10/15). Fall Clips averaged $5.38 per piece in April, down 7 percent monthly and down 41 percent year-on-year. No. 1 pelts were $3.50 per pelt, steady monthly and down 53 percent from a year ago. No. 2 pelt averaged 25 cents, steady with March and down 94 percent year-onyear.

A popular grilling alternative, the loin typically sees some lift heading into Memorial Day weekend. In April, the loin, trimmed 4 x 4, averaged $516.82 per cwt., down 0.3 percent for the month and 6-percent higher from a year ago. The loin was the only primal that saw higher April prices from a year ago.

U.S. sub-primal cuts were lower monthly, but still higher-priced than comparable imported cuts. The rack, roast-ready frenched averaged $1,372.06 per cwt. in April, down 8 percent monthly. The rack, roast-ready, frenched, special (cap-off) saw an average $1,819.92 per cwt., down 4 percent. The U.S. leg, trotter-off, partial boneless averaged $503.92 per cwt., up 0.4 percent monthly. Prices of comparable imported cuts such as the Australian shortloin 0x0 and the shoulder square-cut that have had periods of competitiveness with U.S. product were sharply lower in the first trimester of 2015. U.S. racks continue to hold a significant premium to Australian racks.

As part of the American Lamb Board Roadmap, the industry is encouraged to increase its use of value-based pricing to reward quality lambs. In theory, value-based pricing, or lambs sold on a formula or grid, should reward quality lambs at harvest and discount inferior lambs. Formula lambs are priced post-harvest according to a base price accompanied by premiums and discounts – often for yield grade, carcass weights and carcass yield.
In theory we expect to see use of formula trades and improved quality to go hand-inhand. However, the correlation is very unclear when it comes to U.S. experience. In the mid-2000s the portion of total federallyinspected harvest that was traded on formulas stagnated at about 40 percent, but then fell precipitously in 2010 to 20 percent by 2014. From 2005 to 2014, the percent of lambs receiving yield grades 2s and 3s (the more preferred yield grades) trended downward from about 79 percent in 2005 to 74 percent 2014.

Perhaps the current system perhaps isn’t living up to its potential: maybe it isn’t reducing risk, it isn’t cost-saving and it isn’t assuring packers and rewarding producers with improved quality.

We can measure yield grade, but yield grades represent relative amounts of boneless trimmed lamb meat obtained from a lamb carcass. Yield grade does a good job tracking the excess fat problem in the lamb industry, but it is only half of the lamb eating satisfaction equation.

Quality grade, or the predicted palatability of the lamb, is also important. Most lambs in the U.S. that are graded, grade choice indicating less marbling than prime, but is still of high quality and juiciness. Maturity, or lamb age, is an important component of quality grading with younger lambs generally being more acceptable to consumers. The industry is currently taking old crop lambs to market and most of these are older than one year of age.

In January and February, the percent of lambs that graded choice was 93.6 percent compared to 94.0 percent a year ago. Perhaps more telling was that only 60 percent of commercial harvest was graded in January and February, down from 64 percent a year ago. In early 2015 there were nearly 18,000 fewer lambs that were not graded for one reason or another.

According to the CSU/OSU study, eating satisfaction was most likely to return a premium (72 percent) and product assurance of eating satisfaction (getting the same high-quality lamb meal after meal) received the highest willingness-to-pay premium at 19 percent (April 2015).

While 72 percent of survey respondent said they would pay for improved eating satisfaction, other credence attributes are also important to American consumers and can help add value to the industry. The CSU/ OSU report concluded that “while eating satisfaction is difficult to visually ascertain, retailers and foodservice representatives identified that credence attributes can be monetarily beneficial,” (April 2015).

To the industry’s credit, different markets exist for different sized lambs. One purveyor in the CSU/OSU study revealed that “We need to produce shoulder and legs with a small hot carcass weight, and the rack and loin from lambs with a large hot carcass weight,” (April 2015). A challenge is to match the right product from the right sheep with the right customer, and do this consistently.

“A disconnect exists on preferred size of lamb carcasses and cuts between sectors,” explained the CSU/OSU study (April 2015).

Unfortunately, national lamb industry data reported by USDA doesn’t reflect the smaller, successful markets that are booming across the country.

The food service sector consumes an estimated 37 percent of lamb by volume and yet reportedly can account for up to 65 percent of total lamb sales by value.

Lamb packers surveyed in 2007 revealed that foodservice opportunities were growing for lamb.

It was believed at the time that competition with imports was stiffer at retail and that chefs were branching out, exploring alternative lamb recipes other than the traditional rack of lamb and lamb chops.

The recent CSU and OSU found that credence attributes such as source-branded product and locally-raised lamb were worth premiums to the American consumer (April 2015).

The food service sector may offer untapped growth opportunities for the industry.

It is hypothesized that the U.S. already has a significant market share for some cuts in the hotel, restaurant and institution (HRI) trade. After the recent U.S. recession, the food service sector was been slow to rebound, but has seen recent, sustained growth.

In March, “Restaurant operators were generally optimistic about the direction of the overall economy,” (Daily Livestock News, 5/8/15).

March marked the 25th straight month in which the National Restaurant Association’s Restaurant Performance Index (RPI) was at 100 or more, indicating expansion of the sector.