By early April, AMS reported that shearing was continuing at a strong pace across the western states and into the Midwest and Texas. Spring storms interrupted some shearing plans and some growers had difficulty scheduling the few shearing crews to ensure shearing before lambing. 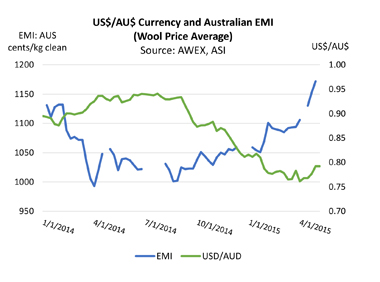 Mid-March saw the first wool trades of the season, primarily of northern Wyoming wools. Reportedly micron and yields were good. In the AMS report, Territory States (western U.S.) 22 micron averaged $3.37 per lb. clean in March, 23 micron was $3.32 per lb., 25 micron was $2.90 per lb. and 26 micron was $2.65 per lb. These prices were 79 to 81 percent of corresponding Australian imported wool prices.

AMS reported that a stronger U.S. dollar along with the struggles in China’s marketplace is making it hard for buyers to obtain clips at prices that growers are willing to sell (4/3/15). AMS reported that compared to a year ago, wool buyers are much more cautious this year, unsure of the direction prices will go given the stronger U.S. dollar and yet higher Australian wool prices.

Woolmark reported that wools in the 24 to 32 micron range have enjoyed very good price levels in recent months (Woolnews. net, April 2015) IWTO President Peter Ackroyd reported that ‘since the financial crisis of 2008, austerity has stimulated demand for the durable and the sustainable in fashion. This trend has very much favored the woolen- knitted look in tweeds, bulky knitwear and accessories.

In general, woolen material consists of fibers of many different lengths laid crisscross across each other while worsted material consists of wool fibers of generally the same length, laid parallel to each other. The revival of woolen production has a positive spillover effect for worsted wool. Woolmark explained that the woolen look is seeing a resurgence of worsted fabrics in some women’s wear – unprecedented since the 1980s (April 2015).

The U.S. primarily produces fine wools (20 mm to 24 mm) and fine crossbred wools (24 mm to 28 mm). These wools are most suited for the production of men’s and women’s outerwear, knitwear, underwear and socks. Farm to Feet is one 100% American sock producer. Its socks are available online and in over 50 retailers from Sportsman’s Warehouse to Cabela’s to Bass Pro Shops. Farm to Feet explained that wool from U.S. sheep tends to be coarser and have more crimp than others, making it stretchy, spongy and great for precision-fit performance socks (Apparel, July 2013). The brand uses wool created from a blend of different mid-micron wool to achieve the ideal mix of strength and softness. “The perception of wool has changed through generations of outdoor enthusiasts,” explained President Kelly Nester. “When the company began working with wool in the mid-1990s, synthetic-based performance socks were still heavily en vogue,” (Apparel, July 2013).

U.S. hosiery producers such as Farm to Feet are growing. Preliminary estimates suggest that in the last two years, U.S. wool mill use has stabilized, slowing industry contractions and perhaps a sign of growth to come. With the advent of soft, washable wool (SuperWash!), wool is making a national comeback. Stronger hosiery demand and strength of military contracts have helped support our domestic wool manufacturing sector.