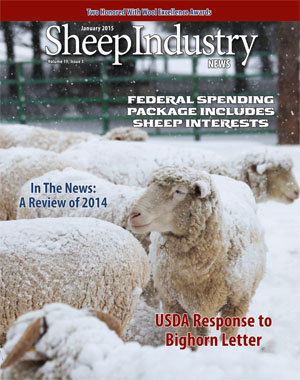 According to a letter from the U.S. Department of Agriculture, the U.S. Sheep Experiment Station in Idaho will remain open through at least Fiscal Year 2015. The letter, dated Dec. 18, was written by Catherine Woteki, Ph.D, an under secretary and chief scientist at USDA. Woteki was writing to Ed Bibeau, president of Hi-Line Wool Pool in Montana. Bibeau had previously written to USDA Secretary Tom Vilsack in support of keeping the Sheep Station open. The USDA announced this summer that the Sheep Station had been slated to close by the end of 2014.

The American Lamb Board has allocated $35,000 to support new lamb promotion ideas targeting non industry audiences (consumers, chefs, media, retailers, etc.). These funds are intended to help support local or regional lamb promotions designed to build demand for American lamb. Available funds are intended to offset the total cost of the promotion rather than subsidizing the entire cost. All promotional funding proposals are due no later than Jan. 9. Complete details about the program are available at www.lambcheckoff.com/programs-activities/industry-sponsorship-program.

U.S. wildlife officials will decide next year whether the greater sage grouse needs protections, even though Congress blocked such protections from taking effect. They could determine the greater sage grouse is heading toward possible extinction, but they would be unable to intervene under the Endangered Species Act. The bird’s fate instead remains largely in the hands of the 11 individual states where they are found. Wyoming and Montana account for 55 percent of the birds’ population.

A Level I Wool Classing School will be held Feb 12-14 at Southern Utah University in Cedar City, UT. The class covers a wide range of topics – wool fiber development and  characteristics, wool fiber production, wool grading methods, wool classing guidelines, shearing site set ups, working with shearing crews, establishing wool lines, packaging and labeling wool. The cost is $ 175 per student unless currently enrolled in college as a student ($40 fee). ASI is providing instructors at this school, coordinated by Ron Cole, ASI Wool Consultant ( 970-302-4117). The school will be coordinated by Victoria Carrol, SUU staff and shepherd. For information, contact Carrol at 801-423-2315 or 435-590-2718.

Jason Suckow has been selected to serve as the director of Wildlife Service’s Western Region, according to Bill Clay, deputy administrator.  Suckow is currently the state director for Wisconsin where he expanded partnerships with the Wisconsin Department of Natural Resources, Bureau of Aeronautics, Department of Agriculture Trade and Consumer Protection and the University of Wisconsin.