Superior Farms, the nation’s largest lamb producer, hosted a celebration for its much anticipated, new Dixon (Calif.) processing facility. It is the first new lamb processing plant to be built in the U.S. since 1997.

To celebrate the occasion, the company hosted a ribbon-cutting, complete with lamb barbeque, county fair-like booths, music, and with the support of California Agriculture Secretary Karen Ross. 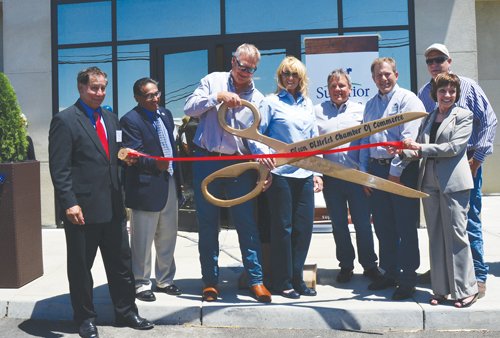 Also in attendance were additional representatives from local and state agencies, fourth- and fifth-generation family ranchers, and more than 100 of the company’s own employees.

The new facility, designed with an eye toward green technologies, will reduce the company’s total carbon footprint. It will leverage the best in ergonomics, natural lighting, wind power and water reduction (estimate is 20 percent), thereby reducing the location’s total energy consumption by 45 percent.

“While we are all hoping for an end to this drought,” said Shane MacKenzie, VP of Operations for Superior Farms, “we built this plant to be as water smart as possible and to ensure that almost every drop is repurposed for sustainable uses. Really, it’s just an extension of our overall philosophy to be good stewards of the land and to never waste resources.”

Founded in 1964 in Ellensburg, Wash., Superior Farms opened its California processing facility in 1981. The Dixon facility was originally built in 1923 and has served as both a beef and lamb packing plant during the 90-plus years it has been standing. The new plant represents a substantial investment, on many levels, for Superior Farms.

“We believe in the U.S. lamb industry,” said Rick Stott, Chief Executive Officer of Superior Farms. “We want to give producers the confidence that they will have a market for their lambs for a long time to come. As stewards of all things lamb, we are investing not only in this plant, but also in the producers. Together, we will thrive.”

Designed by the company’s own operations team, the plant can now process a single lamb in 28 minutes, essentially cutting the time in half. Superior Farms can humanely harvest up to 1,400 lambs per day in its 50,000-square-foot plant. Nothing goes to waste: every part of the animal is used, from the hide and wool to the intestines to the bones, horns and hooves.

Industry representatives, producers/feeders, customers and dozens of employees also joined in the event.

In addition to its brick and mortar investment, Superior Farms demonstrates its dedication to the future of the lamb industry via its commitment to small farmers, local restaurants, farmers’ market-sellers, and the thousands of lambs the company processes and returns each year for 4-H and FFA kids and teens.

The company separates and handles each lamb and returns the product, which is then sold to offset the cost of college tuition. Last year, the company processed 6,200 lambs and goats (from California, Oregon and Washington) for 4-H and FFA youth.

The plant, which is being built adjacent to the existing facility, is expected to be fully operational at the end of August.

Superior Farms, founded in 1964 with headquarters in Davis, Calif., is North America’s largest processor and marketer of lamb. The company has approximately 400 employee-owners at its nationwide network of facilities and offices. For more information, please visit SuperiorFarms.com.