Students Travel From Across U.S. For Wyman Leadership School

Barry Duelke, DVM, of Idaho looked more like a teacher than a student at the annual Howard Wyman Sheep Industry Leadership School that took place in Denver in late June. At 68 years old, he sported thinning gray hair, but spoke from years of experience as he peppered those pegged as instructors with one question after another.

But he wasn’t the only student who came armed with plenty of sheep industry knowledge and experience. And thus is the beauty of the school, put on each year by the National Lamb Feeders Association and named for NLFA organizer Howard Wyman. 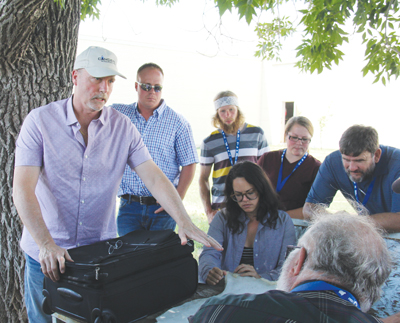 “I learn just as much from the conversations I’m having with the other students as I do the instructors,” said Duelke, who is president of the Idaho Wool Growers Association. “We’ve got such a broad range of industry experience here.”

With twice as many applications as openings, organizers had a hard time whittling the group to just 26 students. Among them were: Duelke, a veterinarian who owns his own flock; an 18-year-old college student whose family runs a feedlot; second- and third-generation sheep ranchers; and a California shepherdess who uses a commercial flock for weed control in urban settings.

“The young people involved with this have been really refreshing to me,” Duelke said. “Our (state) convention in Idaho is like a geriatric society meeting, so it’s great to see a lot of young people who are excited about the sheep industry.”

Like many of his generation, Duelke found it impossible to take even a few days off to attend the school in his younger years. Now that he’s built up the operation back home and has found the right people to work it day-to-day, he couldn’t pass up the chance to attend the school. He was especially excited to visit Harper Livestock Company.

“I’ve been shipping lambs to Harold (Harper) for years and had never seen their feedlot until today,” he said. “So it was nice to see their operation first-hand.”

Classroom sessions proved as interesting as the field trips for Duelke, who has a 32-year-old son pondering the best way to take over the family’s sheep and farming operations while working as a diesel mechanic and providing for his large family. In fact, students spent two hours listening to three experts talk about the ins and outs of family transition.

Alternative grazing options were also of interest to Duelke, who has both land and water issues to deal with at times in Idaho. Other topics at the school included: accessing USDA market information; financial opportunities available through the National Livestock Producers Association; ASI’s Let’s Grow program; and a presentation from the American Lamb Board on the Industry Roadmap.

The best way to understand the impact the school had on its students is to hear what they learned during their two and a half days in Denver. 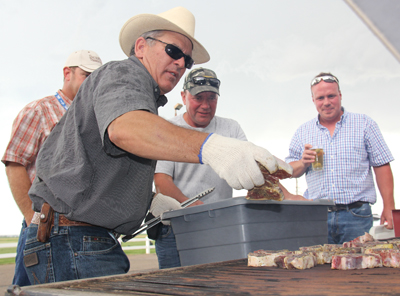 “I’ve raised sheep most of my life, but just started a commercial business five years ago,” said Reuben Sprung, who attended the school from Iowa with his wife, Nikki. “It all made us think and really opened our eyes to some new things. Getting to see the plant is important to us because this is where we’ll bring our lambs in the future. That’s not an opportunity that comes around every day, so we figured we would jump on it this year.”

California’s Brittany “Cole” Bush works with Star Creek Land Stewards to oversee grazing operations around the Bay Area, and her reasons for attending the school varied from general interest in the industry to working with pelts.

“I’m here because I have an interest in learning about the traditional operations out there and how they are coming together to adapt in the industry,” she said. “Because I don’t come from a ranching background, I really wanted to hear conversations from those who have a lot of experience in this industry. It’s been really inspiring for me.”

With 20-plus years in the U.S. military, John Lemondes is new to ranching and farming, but has a unique perspective on wool.

“In the military, I was involved with the textile industry – everything from uniforms and parachutes to other equipment – and I met what I call the ‘wool guys’ through that,” he said. “Because of that, I knew that sheep and wool would be a part of whatever I did once I left the military.”

Lemondes is putting his ag science degree to work as he fulfills a long-term goal in owning and operating a family farm. He’s also serving as a wool consultant with ASI.

“I’ve got 436 acres in New York state and we’ve had sheep on the place for a year now,” he said. “The exposure to different operations from different parts of the country is always valuable, especially for me as I’m only a year into fulfilling this dream that I’ve had since I was 15 or 16 years old.

“This is one of many things I’m doing to really learn all aspects of the industry.”

To learn more about the school, visit NLFA-Sheep.org.