From Georgia To Puerto Rico

From Georgia To Puerto Rico

In May of this year, Kenan Davila approached me about getting Texel rams to send to Puerto Rico to upgrade the sheep there. I had three lovely February rams, of top quality British breeding that I offered. 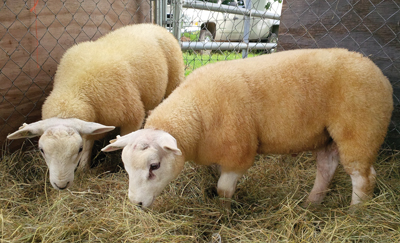 Kenan picked out two lovely boys, and we went to work getting approvals. We had a time crunch because it was decided they would fly (Delta air cargo, of course, out of Atlanta) in extra large dog crates, and we needed to ship before they went over 100 pounds. One of the striking features of the Texels is their very high rate of gain, with 0.8 to 1 pounds per day up to three months of age, so at 3 to 3 1/2 months they were already approaching 90 pounds.

Fortunately, all parties worked hard and we met the deadline.  The day before they left, Dave Milan bathed them to get as much red clay out as possible (we were tempted to refer to them as rare apricot colored sheep, but fortunately it washed out), and off they flew to their new home.

The flight went uneventful. The boys were very well received and all are optimistic that crossed with the much smaller and slower gaining native sheep, the offspring will do much to improve sheep raising in Puerto Rico.